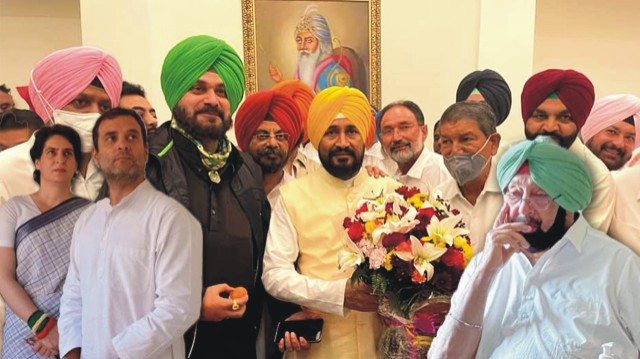 Crisis in Punjab Congress is far from over as Ex-CM Amarinder is keeping his cards close to chest.

WHILE taking a clue from Bhartiya Janta Party high command which replaced four chief ministers in the span of six months that too in the hope of retaining power besides acting contrary to expectations of party cadres, the Congress high command has created a new ‘Crisis Management Team’ comprising the duo, Rahul and Priyanka, obviously fully supported by acting AICC President, Sonia Gandhi which took a bold decision to force Amaridner Singh to resign and replace him by a Dalit face, Charanjit Singh Channi which may act as a trend setter to resolve an identical crises in Rajasthan, Chhattisgarh . 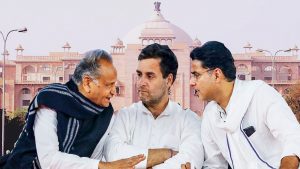 Political observers believe that high command’s action in Punjab may act as prelude to another neighboring Chief Minister, Ashok Gehlot who has been dilly dallying since past one year to fulfil the promise made by Prinynka and Rahul to former Deputy Chief Minister, Sachin Pilot which had helped high command in checking the young leader from quitting the party. Similarly, high command will find it easy to handle Chhattisgarh crisis also besides dealing with dissensions in state units.

But new Punjab Chief Minister faces one of the biggest challenges of managing the economy which is in doldrums and state may be pushed in financial distress as centre is not in a position to help any state which can be attributed to its own woes and fallout of pandemic besides a negative attitude to come to rescue of any opposition party ruled state.

SAD-BJP combine had come to power in Punjab in 2007 and at that time public debt stood at 40,000 crores which went up to Rs 1,53,773 crores after a decade when both parties were defeated in 2017. The trend continued during Amarinder Singh period and public debt was at Rs 1,93,659 (2019-20) which may be an uphill task to manage for Channi as he may opt for announcing the sops prior to polls like the recent one including free water and electricity to poor people which will further push economy into serious distress. 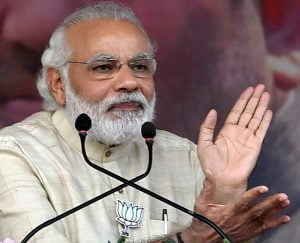 An emergence of Narender Modi on the national scene as a vote catcher and strong leader after winning 2014 Parliamentary elections for Bharatiya Janata Party resulted in the dwindling and weakening of Congress high command which can be attributed to dismal and humiliating performance of Congress party in these polls.

Experts opine that whenever the top leadership ceases to be a force to win the polls for his or her party, high command concept becomes a causality which happened with grand old party also. Late Mrs Indira Gandhi used to enjoy absolute power as she could ensure victory in Lok Sabha elections and high command also became strong under Sonia Gandhi as she was credited for reviving the organization after taking over as AICC president in 1998.

Congress went on winning the polls in 2004 and 2009 hence high command could dictate and appoint the party Chief Ministers and State units Chiefs. But everything changed when Congress was wiped out in Lok Sabha polls which was followed by a rout in several states.

Political observers say that high command handling of the crisis in Punjab may act as a precursor to resolving the pending issue of fulfilling the promises made to Rajasthan’s former Deputy Chief Minister Sachin Pilot by Rahul and Priyanka which had prevented him from joining the BJP a year back.

But Rajasthan Chief Minister, Ashok Gehlot has been dragging his feet to accommodate Pilot and his loyalists which had embarrassed the high command. As per indications, now it is the turn of Rajasthan and crisis management team is likely to take on Gehlot to force him to be flexible and adjust Pilot and his supporters in the government.

Then Chhattisgarh is also on plate and a decision to change some of the state presidents has been pending but none knows about high command’s strategy to have a regular national President of AICC.

Congress high command’s desperate move to install a Dalit as Chief Minister in Punjab may have political connotations but he is bound to face a huge challenges of uniting the warring factional leaders who have got their ‘inflated egos’ and ‘vested interests’.

Outgoing Chief Minister, Capt Amarinder Singh had offended farmers when he asked them to shift their ‘Dharnas’ from Punjab to neighboring state or Delhi.

Congress leaders like Rahul Gandhi and his party had been putting central government on the mat for ignoring farmers’ agitation and supported their demands of scrapping the farm laws.

The farmers are peacefully agitating at 113 places in Punjab and they may actively campaign against BJP in the state elections.

The unemployment problem is one of the biggest factors which is related to tall claim to give jobs to 19 lakh youths as ground reality may differ which is better known to common people. 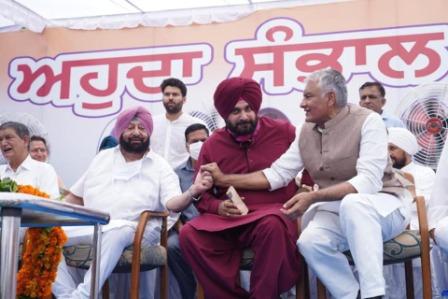 Punjab state President, Navjot Singh Sidhu has been harping on stern action against those who committed religious sacrilege and accused his own government of being soft towards the culprits. Former CM had given the details of action in this case which included suspension of 15 policemen, filing of 24 charge sheets, arrests of 10 civilians etc.

The validity of power purchase agreements is yet another important issue which will require immediate settlement by new Chief Minister, Charanjit Singh Channi. Balancing of the power equation between Amarinder and Sidhu factions can prove the most difficult task as he will be expected to have equidistance to ensure better coordination between government and party.

New CM has announced waiving off water and electricity bills for poor in the state. Rahul Gandhi’s support may help CM Channi to achieve this goal.

Six Factors Which Tilted Balance In Favour Of Channi

Politics is a game of uncertainty due to which a low lying Dalit leader, Charanjit Singh Channi emerged as a ‘dark horse’ thereby outsmarting those who were already accepting the congratulatory messages though high command was yet to announce the final name.

It was clear that a dalit leader will create history especially after 15 chief ministers have occupied this chair since 1947 and none from this category though Dalits constitute 31.9 percent of total population of Punjab.

Second, Channi’s proximity to Rahul Gandhi did play a major role and he won in the process of elimination. Duo consisting of Rahul and Priyanka were at the forefront to take this bold decision though they were backed by Sonia Gandhi.

Third, like BJP which replaced Vijay Rupani as CM in Gujarat due to caste factor to please Patels, Congress high command has tried to create a lethal amalgamation of Jat Sikh, Navjot Singh Sidhu, Punjab congress president and a Dalit, Charanjit Singh Channi as CM.

Fourth, It will be first time in the history of Punjab when a Dalit leader, who belongs to a community constituting about 31.9 percent of total Punjab population, will lead grand old party along with Sidhu into Feb/March,2022 assembly elections.

Fifth, Congress has put the ball in the court of BJP which had taunted it to declare Dalit as chief ministerial candidate which can be one of the election planks of Congress.

Sixth, though Channi was one of the four ministers who was actively involved in the campaign to oust Amarinder Singh but he is not a diehard enemy of ex CM who would have revolted, had Sidhu been chosen as new CM.

Sixth, choice of dalit leader will make to it difficult for congress leaders including Amarinder Singh to oppose the decision of the high command as every leader needs dalit votes to win the election.

In Punjab assembly having strength of 117 seats, Dalits constituencies are 34 and their annoyance can ensure defeat of several leaders. As per data, OBC constitute 31.3 percent, SC (Dalits) 31.9 percent and others 33 percent.

Political analysts believe that crisis in Punjab is far from over as Ex-CM Amarinder is keeping his cards close to chest and he may go to any extreme to block Sidhu’s chances of becoming chief minister if Congress comes to power.

Congress has put its main rival BJP in ambiguous position after declaring that elections will be fought under the joint leadership of Channi and Sidhu which leaves some hope to state party chief to attain top slot in Punjab.

Observes feel that it may not be an uphill task to dislodge Channi if party comes to power as it may send wrong signal at national level that Congress is anti Dalit and it appointed Channi as CM to befool the community hence nothing can be predicted about post assembly polls scenario?

PrevPreviousIs the Congress going to seed?
NextUP: Then and Now – Comparing the Governance of Akhilesh and AdityanathNext
Author Related Post
Related Post