UP: Then and Now – Comparing the Governance of Akhilesh and Adityanath 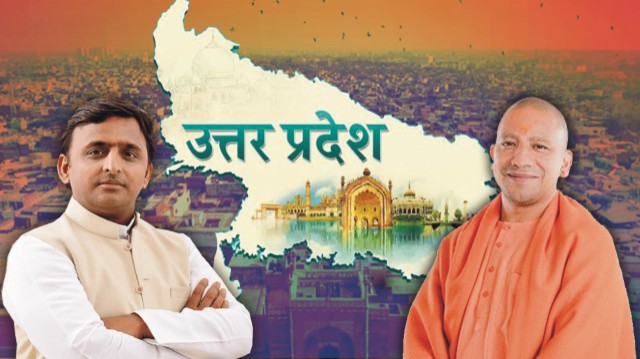 For UP, who is better?

Let us have an apple-to-apple comparison of the current five years of Adityanath Government with the previous five years of the Akhilesh Government. An unbiased, objective analysis of performance will cut through the clutter of propaganda. We have used various state-level parameters which are relevant for people and tried to draw the comparison.

Economic indicators are often represented in the form of Gross State Domestic Product (GSDP). GSDP is the total of value added by different economic sectors (Agriculture, Industry & Services) produced within the boundaries of the state calculated without duplication during a year. It is one of the measures of a state’s economy. As the economy makes progress, the GSDP grows.

The rate of growth differentiates between leaders and laggards. During the tenure of Akhilesh, the average growth rate stood at 12.25%, and during Adityanath’s tenure, it is at 7.34%. This Indicates Akhilesh did a better job compared to Adityanath in managing economic growth represented in terms of GSDP Current Prices. 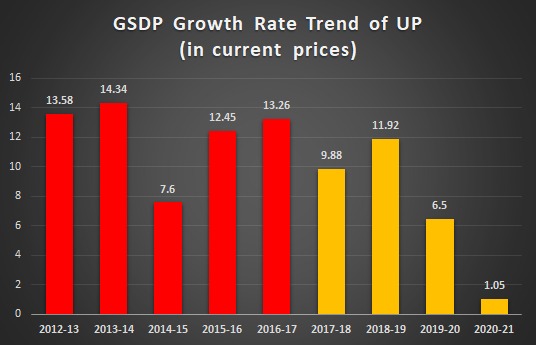 During 2015, Uttar Pradesh contributed 12.1% (see page 3 – Trend in Violent Crime in NCRB report of 2015) of total Crimes in India. But during, 2019 it registered 12.2% of total IPC crimes recorded in India. There is not much improvement but some deterioration in terms of violent crime against women as per a report published in the scroll. Hence it will be safer to conclude that the crime rate continues to remain a cause of concern for both regimes.

State Priorities Between the two regimes

A study of the allocation of Budget Using PRS Budget Data of 2016-17 and 2020-21 indicates the priorities. The focus of the Samajwadi Party was social welfare and providing infrastructure for growth more, wherein BJP focused on development. Akhilesh was more focused on people-led growth, while Adityanath was more focused on business-led growth. People are open to drawing their conclusion here based on the focus they had.

Table 1: Allocation of Budget during SP and BJP Government 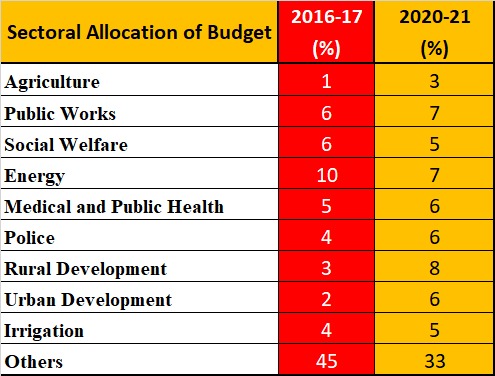 Referring to CMIE unemployment data, It will be hard to conclude anything here. Going by average since 2016, Adityanath did a comparatively better job than Akhilesh. Even though Akhilesh managed the unemployment situation well towards the end of his tenure, his average unemployment was 11.2%, and for Adityanath, it averages 7.2%. 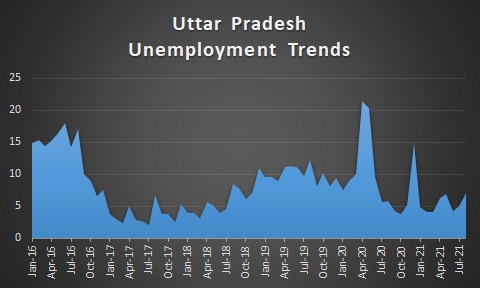 NSDP is somewhat similar to GSDP explained above but without the depreciation of a state’s capital goods from the GSDP. The NSDP per capita income of people in Uttar Pradesh grew by 12% (average) for Akhilesh and Adityanath. Hence their performance concerning driving prosperity for people remains the same. See the graph below indicating how the per capita income (NSDP) has changed.

The Human Development Index is a composite index of life expectancy, education, and per capita income indicators, used to rank countries or states into four tiers of human development. HDI shows whether or not the development is happening. Uttar Pradesh HDI improved during Akhilesh’s period but remained stagnant during Adityanath’s period. However, the HDI ranking of Uttar Pradesh remains the same in decades. Therefore, focusing on Ranking does not make sense, and the value of HDI, which leads to Ranking, should be compared as Ranking is comparative. Ranking indicates comparatively; it is growing at a slow pace.

Hence looking at the above numbers, the performance of both has been neck to neck. Akhilesh has focused more on social development with a bottom-up approach; Adityanath has focused on the top-down approach, which is business-led growth towards driving development. While Akhilesh’s approach is more socialistic, Adityanath’s belief appears to be more capitalistic. It will be hard to summarize who is better, but I leave it to readers to draw their conclusions based on factors they feel are more relevant.