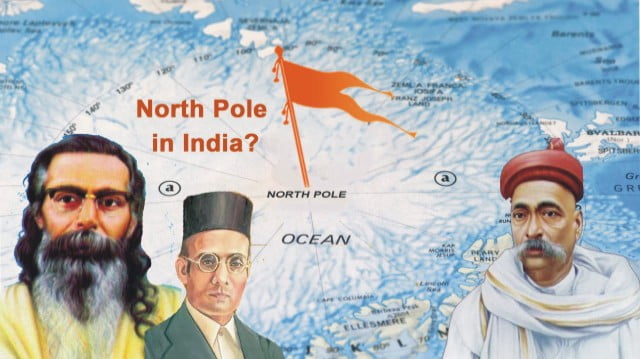 The RSS rebuttal is as hard to understand as the concept of exodus of North Pole from India for many logical thinkers.

DID YOU KNOW that North Pole was in India some 8000-10000 years ago near between Patna and Orissa and ran away from India in a zig-zag fashion?

If you disagree, you are against the fundamental belief of Hindutva ideology of RSS whose founding fathers laid down the premise of Hindutva on some of these principles. M. S. Golwalkar (Guruji), wrote a book on it which was widely discussed.

Veer Savarkar is recognized as the father of Hindutva ideology from his Book Hindutva. Did you know that Veer Savarkar called India as Fatherland for those who are covered under Hindutva? A fatherland means your ancestral property and a motherland means if you are born here.

Fatherland basically gives broader entitlement to the land which comes under the jurisdiction of Hindustan.

Savarkar made the primary distinction between original inhabitants and invaders using his three principles of Nation, Race, and Civilization. Aryan migration theory does not play any important role in Hindutva ideology.

The core ideology of Hindutva was further indoctrinated by RSS.

While Veer Savarkar was conceptualizing the Hinduvtva and assigning it to its original inhabitants, another learned and well-respected researcher and freedom fighter Bal Gangadhar Tilak wrote another piece of his brilliant research, “The Arctic Home In The Vedas”.

In this research, he studied the planetary positions mentioned in Vedas, related them to a geographical location in the arctic and close to the North Pole.

Hence, some 8000 years ago, those who wrote, and practiced Vedas were near the north pole. True, the modern DNA findings route the map which the Aryans took also has a close resemblance to this, and hence it is a matter of further study.

Besides, this complements the research conducted by William F Warren (First President of Boston University), “Paradise Found or the Cradle of the Human Race at the North Pole”. Tilak and Max Muller had earlier discussed these findings, which Max Muller conveyed it to Warren who investigated and wrote this piece of research.

The situation became very complicated. If Aryans lived near the North Pole, how come India or the subcontinent is their fatherland? Suddenly, the entire ideological claim of Hindutva and original inhabitant concept was upside down. The confusion of Tilak versus Savarkar was hard to handle.

Golwalkar, who was fondly called Guruji, wrote a book to solve the dilemma based on his own research.

MS Golwalkar, in his book “We or Our Nationhood Defined” (See page 45) based on some conversation of a botanical expert concluded in his infinite wisdom that the North Pole was somewhere between Bihar and Orissa and moved northwards in a zigzag march.

So, this settled the controversy created between learned scholar Bal Gangadhar Tilak and the theory of Hindutva by Veer Savarkar. Below is the original image of the relevant page mentioned here from his famous book. 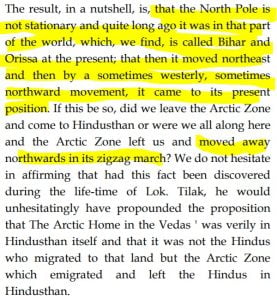 Later, a section of thinkers in RSS disowned it completely. Some RSS ideologues claim that MS Golwalkar never wrote that book. If he has not written, the question arises, why it was not opposed or questioned by MS Golwalkar, why he did not go to court to make it clear, and why he never issued any statement.

The RSS rebuttal is as hard to understand as the concept of exodus of North Pole from India for many logical thinkers. However, I also remember the proverb and rhyme “if wishes were horses, beggars would ride”.