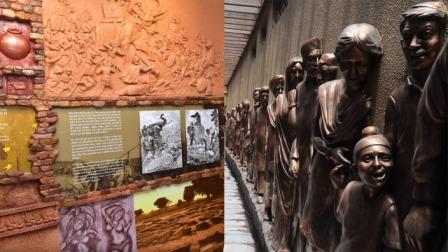 Jallianwala Bagh – Stop the plunder under the guise of preservation

Memory is an audaciously elastic phenomenon. It lives in family whispers, in folk lore, in customs and traditions, in rivers, in oceans, in history books, in statues, in forts, in people’s mind even if they do not articulate it. That is why, those who target civilizations – in the name of nation states – need to destroy memory. The killing of memory is memoricide.

They powerful ones sometimes destroy memories like the Taliban defaced the Bamiyan Buddha, sometimes by burning libraries and ransacking libraries like the ISIS in Mosul, destroying places of faith like the Hindutva armies did to Babri Masjid, reclaiming revisionist histories like the Hagia Sophia church to mosque to museum back to mosque. There are countless other examples. They seek to erase the layering of histories from external artefacts of memories. All of these are memoricide.

Punjab, the historic gateway to the India sub-continent from Central Asia, and the whet-stone of India’s democracy, has a long and sustained contribution to the making of modern Indian nation. The Jallianwala massacre on April 13, 1919 was a killing of ordinary protesters in a seven-acre garden with no escape routes except the narrow lane through which the Brtish India Army entered. The location is a few hundred meters from the Darbar Sahib, Amritsar.

The Hindu, Muslim and Sikh protesters had gathered in response to draconian Rowlatt Act by the British colonizers who had excluded Mahatma Gandhi from visiting Punjab and secretly deported Congress leaders Saifuddin Kitchlew and Satyapal on 10 April. British India Army Brigadier General R.E.H. Dyer led about ninety Gurkha, Baloch, Sikh, Rajput troops from 2-9th Gurkhas, the 54th Sikhs and the 59th Sind Rifles and ordered them to fire towards the peaceful crowds. More than 1500 were wounded or killed. Historians agree that the Indian freedom struggle started in right earnest from The Jallianwala massacre. The Jallianwala Bagh is also a symbol of Punjab’s composite culture – Punjabiat.

Last year was the centenary of the Jallianwala Bagh massacre. The Centre allocated Rs 20 crore in the first phase through the Ministry of Culture for renovation of the Bagh supervised by the Jallianwala Bagh National Memorial Trust. The ones in charge are basically from Bhartiya Janata Party whose antecedents never participated in the Indian freedom struggle, and whole icons wrote apology letters to the British.

In the name of modernization, one of the big innovations proposed and carried out was of Khoonhi Khu (the well) into which hundreds of protesters jumped to escape Dyer’s bullets. It was an old structure, haphazardly cemented and barricaded later with wire mesh to avoid onlookers tumbling into it but that too was part of history. The issue in India with restoration is that instead of preserving how things were, we redo them. An optic fibre roof and modern brick structure was proposed and carried out.

Similarly, the wall which bore bullet marks has be refurbished, again losing precious history. A new Martyr’s Wall has been proposed and erected. As expected by the BJP, through their costumes, the figures on the Wall look more central Indian than Punjabi of the period of the massacre. Even two semi-nude women figures were added but now removed when people protested. Like at the proposed renovation of Amritsar Railway Station, the lotus symbol has come up at various places in the Bagh for unknown reasons except that BJP is carrying out the renovation – appropriating the history of Punjab, claiming the civilization of Punjab.

The mal-intentioned renovation is not the prerogative of the BJP alone. After Operation Blue Star in 1984, the government of India demolished he 400 year-old Mai Sewan Bazaar which was Amritsar’s oldest living, breathing, museum. The Shiromani Akali Dal had turned the approach to Durbar Sahib into so called Heritage Street using red sandstone and Rajasthan design instead of in Punjab’s own traditional style. Now when it rains, water clogs all over the Heritage Street.

The SAD even erected a West-inspired Flame of Liberty in front of the Jallianwala Bagh which is completely out of place and context. The memory of Durbar Sahib and its precincts, of Fort Gobindgarh in Amritsar, carried by the previous generation have been turned into a Disneyland-like tourist attraction.

Sadly, it is the same with Sikh organisations called Kar Sewa wale Babas. They collect huge donations from the faithfuls and destroy traditional structures. The famous fort from where Guru Gobind Singh fought the battle of Chamkaur has been turned into a marble structure. The Anandgarh Sahib Gurdwara in Anandpur Sahib has been turned into a replica of Lego toys with which children play.

Bebe Nanaki’s home in Sultanpur Lodhi has been turned into a toy house. There are thousands of other smaller, less important, but eminently historical structures in villages, towns, cities of Punjab which are being ravaged through neglect, land grab, or renovation.These are all acts of memoricide against the people of Punjab.

We are poor custodians of our history. If we continue to allow this memoricide to happen, we will indeed lose memory and all our rooted connection with our land. To keep the sense of our nation and Punjab, we must stop the plunder under the guise of preservation of Jallianwala Bagh.