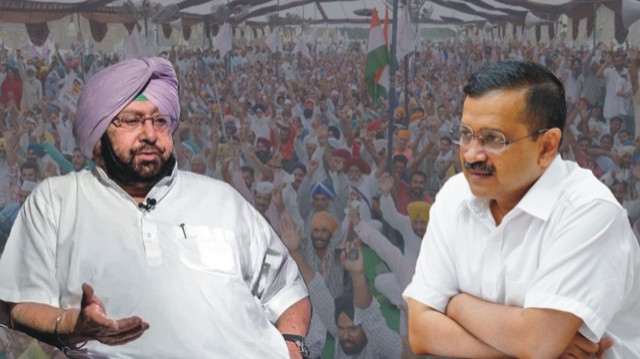 Let us see how both CMs have performed in the last five years.

An English Idiom says, “proof of the pudding is in the eating”. Here we are going to compare hard facts.

Delhi has the advantage of being the national capital but is comparatively smaller in size. Both state CMs have their own advantages and disadvantages. Hence, we are not comparing chalk and cheese.

So, let us see how both CMs have performed in the last four years. Both claim to be hardworking and equally concerned. But what matters is the outcome and result.

We tried to go through the IBEF presentation of both Delhi and Punjab to see how the states compare in terms of GSDP growth. Delhi’s average growth rate (CAGR) in constant currency was 7.70%, while Punjab was lagging by 6.76%.

During 2021 under constant prices, the per capita income of Delhi was 3.9 Lakhs and Punjab 1.7 lakhs. The comparison indicates Arvind beats Amrinder in making the people of his state richer.

Fig 2: Per Capita GSDP of Delhi and Punjab

FDI inflow in Punjab is negligible compared to Delhi despite Punjabis being entrepreneurs, and many settled overseas. During the period Oct 2019 to March 2021, Delhi received Foreign Direct Investment of USD 9.4 Billion, wherein Punjab received USD 741.23 Million. Once again, Arvind’s performance is at a level that makes even the comparison difficult.
Fig 2: FDI received by Punjab and Delhi

Electricity tariffs are one of the lowest in Delhi. There has been a significant amount of work done in Tariff rationalization. People are benefitted in Delhi several times more compared to Punjab from not just the lower tariff but good availability. We have taken up to 300 units for comparison.

In addition, Delhi’s availability of power is 99.4% and exceeds the benchmark requirements of 98%. Punjab’s availability appears to be a journey as there is a shortfall.

Arvind is much ahead in terms of power reforms to Amrinder, and the Delhi electricity model has become a game-changer.

Fig 5: Healthcare budget spending as a percentage of budget

For Punjab, Healthcare is a journey despite good hospitals and an enthusiastic population. Arvind stands out in Healthcare and becomes a role model.

Delhi’s share of spending on education is best in the country. Punjab does not come even close to the educational spend as percentage of its budget. Over the years the Delhi Government schools have earned the international recognition and has become a role model. It will be unfair to compare Arvind’s amazing performance in education with that of Amrinder.

Fig 6: Education budget spending as a percentage if budget

As per CMIE data, Punjab performed pretty well in terms of Unemployment compared to Delhi. Punjab did better than Delhi in labor participation and controlling unemployment.

We can safely conclude from the above comparisons that Arvind is ahead of Amrinder, at least on the parameters judged above. However, excellence remains a journey, and politics seldom revolve around truth and facts.

Hopefully, the insight above will help everyone draw a comparison and discuss the journey towards a better and cleaner political environment irrespective of who wins next.