People bent on committing hara-kiri with leaders egging them on! 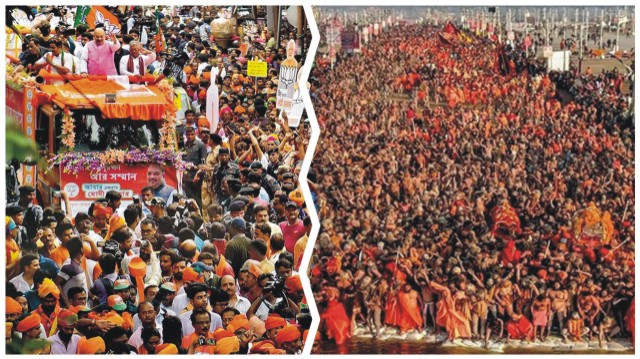 Leaders must lead by example and not put people to risk for the sake of their political ambitions.

The second and much worse wave of Covid has hit the country but our responses are shocking. It is almost unbelievable that our leaders are encouraging people for mass participation in election rallies and religious congregations on a massive scale fully aware that these people are inviting death by Covid not only for themselves but for others and their loved ones too.

The most unfortunate aspect of the present situation is the bad example set by the leaders themselves. While mouthing advise to the common people, they had been flouting the rules themselves with impunity.

Their attitude has led to a trickle down impact with the common people also taking the advice in a casual manner.

The current election campaigns in the four states, and particularly in West Bengal, would go down as instances where political leaders acted in a highly irresponsible manner for the sake of power. Even if that meant more people getting afflicted with Covid or losing their lives to the pandemic.

We still do not know the extent of damage the political rallies have done in helping to spread the virus.

Some initial reports have indicated manifold increase in the number of infections but the crowds at political rallies organised and encouraged by leaders is there for all to see.

Not a word escaped from their lips to advise people to maintain social distance or wear masks. All they were interested in was the number of people at their rallies.

Undoubtedly it is not just the Bharatiya Janata Party that was responsible for the high pitched campaign in West Bengal, its main rival the Trinamool Congress did not do any better.

Congress and the left don’t count much in that state now.

The high pitched high stake elections in West Bengal brought out the worst of the politicians. Same is true for the other states where elections are being held but West Bengal just stands out.

If the leaders, including the Prime Minister of the country, did nothing to discourage the irresponsible behaviour of the people, it is difficult to expect anything better from the other leaders.

His earlier calls of do gaj ki doori hai jaroori and wearing of masks held little meaning for the people when they witnessed him and his team campaigning for elections.

As if this was not enough, the government displayed highly irresponsible behaviour in the conduct of the maha sanan in Haridwar.

It was attended by lakhs of devotees with absolutely no regard for any kind of precautions. It could have been better organised if it could not have been avoided.

Last year when Tablighi Jamaat gathering was called a super spreader of the virus, the government and the media had gone all out to condemn the gathering.

No body is saying a word on it now. Even if it could not be banned, better arrangements would have made a huge difference.

But as I said earlier, it’s the people themselves who must share the responsibility for the current sad situation.

Most people had started treating the situation in a very casual manner. They assumed that the worst was over and that they have nothing to fear now.

While the fatigue due to the long period of restrictions is understandable, putting themselves to risk and putting the elderly to a great risk was the most insensible thing to do. 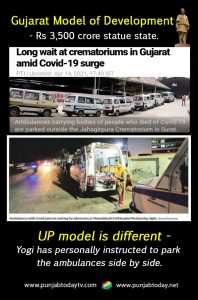 While Maharashtra tops the country, the situation in Punjab too is very bad and the state government cannot wash its hands off from the responsibility.

Even the basic requirement of people wearing mask was not met and there was little police action on the ground.

Besides the religious congregations and political rallies, people have been throwing all caution to winds even during agitations like the farmers agitation on Delhi border.

About 10 crore citizens out of a total of about 135 crore citizens have been vaccinated so far. For the entire population to get the vaccination or to develop herd immunity, it would take over a year and a half.

It is a massive exercise. Till then the people need to act more responsibly towards themselves and for their elders.

Also the government must come down with a heavy hand against those violating the guidelines. And, more importantly, the leaders must lead by example and not put people to risk for the sake of their political ambitions.

Also Read: Centre wants to give farmers what they wanted, Farmers all set to fight against it