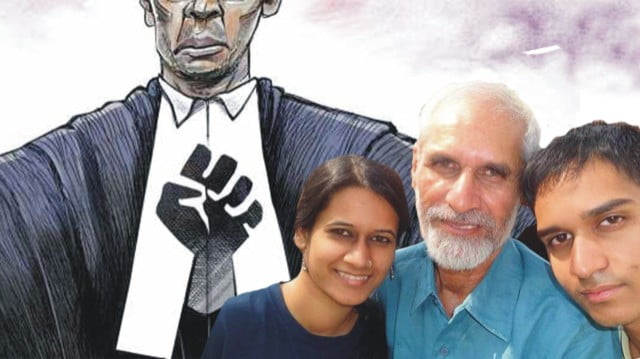 You are too powerful, Judge Sahib

Punjab Today brings you this lament by Swarajbir, renowned playwright and poet. As is understandable, the death of the father of a brave daughter of India in such circumstances has left many a good hearts shaken.

Prof Mahavir Narwal, father of Pinjra Tod activist and JNU research scholar Natasha Narwal, died of Covid-19 on May 9, 2021, in a Rohtak hospital.

Natasha Narwal is currently in Tihar Jail. She is known for her vociferous fight for civil rights and an equitable world. Natasha’s brother, Aakash, is also Covid-19 positive currently.

Prof Narwal could not meet his daughter till the very end despite repeatedly knocking at the doors of the Indian judicial system.

Natasha was granted interim bail on Monday, May 10 with the Delhi High Court saying it was doing so since there was nobody else in the family to perform the cremation and last rites and that her father’s body is waiting in the hospital to be accepted.

Activists the world over had been demanding Natasha’s release ever since she was arrested in May last year on allegations that she was part of a premeditated conspiracy in the northeast Delhi riots in February that year.

She has been booked under the stringent Unlawful Activities (Prevention) Act, a legislation often invoked against innocent but vociferous activists.

Prof Narwal remained a figure of fortitude till the very end. “There is nothing to fear about being in jail,” he had said about Natasha’s wrongful incarceration.

“My daughter will cope with positivity and come back stronger.”

Kind Judge Sahib
Day ago, this daughter
had come to your Court
She had not said
“Don’t prosecute me”
She had not said
“Declare me innocent”
Her lawyer had prayed
“Give her two moments
She is to see her father
She wants to talk to him a bit
He is sick.”

Judge Sahib, you can keep her in prison for more days
You can hand over her a sentence of life imprisonment
Your black robes have all the powers Judge Sahib
You can do justice

You had said
You will hear prayer on Monday
Judge Sahib, that Monday won’t come
That Monday
has disappeared from the Calendar

Judge Sahib
your whole life
You will be searching for that Monday.