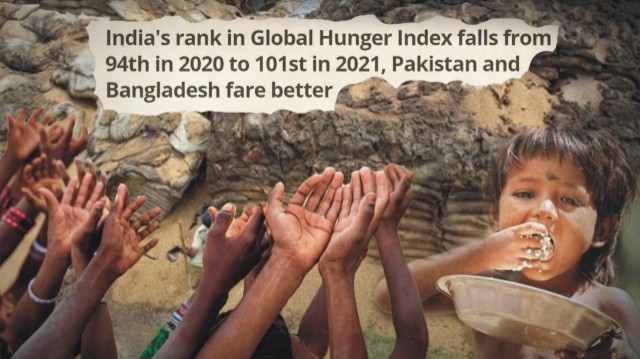 India’s recent Global Hunger Index (GHI) report indicates that progress on the fight against hunger has been stagnating from 2012 till 2021.

The Global Hunger Index (GHI) is a tool that measures and tracks hunger globally and by region, and by country, prepared by European NGOs of Concern Worldwide and Welthungerhilfe.

GHI is a composite metric of – Undernourished population, undernourished and stunted growth under five, and Child Mortality.

It is a miserable situation for India for not having made any progress. It indicates how we neglected certain sections of our society. This benchmark also shows the country’s priorities that are not aligned to the poor and needy.

We tried to investigate and go behind the rankings to uncover the truth. The rank should always be analyzed carefully as there are changes in the number of countries included and the scope which also keeps changing.

You may still be making progress but fall behind the rate of progress made by others.Unfortunately, most journalists focused on Ranking to understand the Hunger, which is not the right approach.

Let us look at the rankings and number of countries investigated by the researchers of HDI every year. Every year, the GHI scores of countries keeps changing as new facts emerge and the scope expands. Hence whatever we say about rankings based on previous data is flawed and we should count on only latest reports.

HDI researchers reprocess the data for previous years and generate the GHI data again. For this reason, the HDI team published the table of reprocessed data in 2021 for us to draw our own conclusion.

The sequence of the countries is based on 2021 GHI rank. Only 94 countries qualify as they have complete data for all four years under comparison. We ranked them again based on their GHI scores for the years 2000, 2006, 2012 and 2021.

Note: For Year 2000, Bulgaria and Jamaica (rank 2) had same rank as the scores were same. 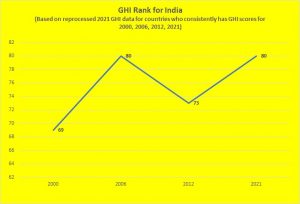 It indicates that we did a comparatively good job during 2006-2012 and the relative performance went down during 2000-2006 and 2012-2021 as ranking went down among the countries that had availability of GHI data.

Now let us understand scores for India, which may paint a slightly different picture when analyzed in isolation. I have shown the progress in terms of GHI score in the below chart. The scores indicate significant improvement from 2006 to 2012, but India struggled to improve its 2012-2021. The same type of progress during the NDA-1 regime between 2000 – 2006 indicates that India’s war on Hunger was choppy and remained muted in two successive NDA regimes. 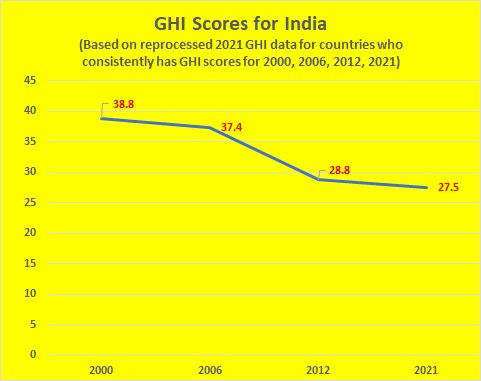 We should not see the Global Hunger Index (GHI) in isolation. The Human Development Index (HDI) is also slowed and shows similar patterns. You can check our previous report, The saga of an Unborn Vikas – Driving India Backwards.

When both HDI and GHI scores show similar patterns, it is alarming for a diverse country like India. The slowdown means that it is moving back comparatively and relatively as the benchmarks around us have shifted.

If we continue to stagnate, Burkina Faso will be ahead of us in due course of time. Ironically, they ranked much better in GHI scores and rank compared to India in 2021. We leave the rest to your imagination!

PrevPreviousWhy not 40 pc tickets for women in Punjab and elsewhere?
NextGlasgow Climate Change Summit: What Can We Expect?Next
Author Related Post