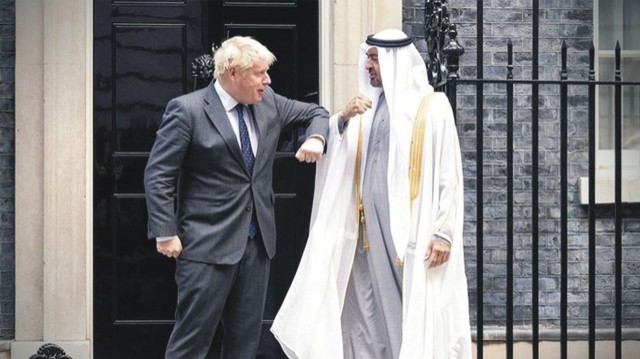 The new found love between the UK and UAE might have propelled one of its former ministers to nominate the Abu Dhabi Crown Prince, for the Nobel Peace prize.

THE WITHDRWAL of the US forces from Afghanistan before the deadline has dealt a severe blow to the special relationship between the US and UK and also the EU member states. They insist that the withdrawal before time was a hasty decision and their view was not taken on-board.

They also base their criticism of the Biden’s decision on the inputs by both the British and other countries’ intelligence that such an action might end up in chaos, and the subsequent events leading to the rout by the Taliban forces in Afghanistan, proved their point.

In this scenario the UK is eagerly trying to find an ally in the Gulf region, which could guarantee its interests and contain any threat to it not just in the region but beyond in other Arab states too.

The British leaders seems to have identified an ally which fits this profile, and who is better equipped to help the UK surmount this problem. He is Sheikh Khalifa bin Mohamed bin Zayed Al Nahyan, Crown Prince of Abu Dhabi.

Intelligence sharing between the UAE and the UK has helped save British lives and the country is seen as a regional-leader in combatting terrorist finance and extremist propaganda.

The events in Afghanistan affected the long-term special relationship enjoyed between Britain and the UAE, but in a positive direction. In a statement, Britain’s ambassador in Abu Dhabi has said that the evacuation of UK citizens from Kabul was made possible by the assistance of the UAE which provided a staging airport as well as support from across government ministries.

Dubai over the past 30 years or so has been transformed by engineering, finance and enterprise, aided not least by Britain’s distinctive connections with the territory and its people since the early 1800s — a century and a half before the formation of the Emirates of the present.

Around 200,000 Britons live in the UAE and more than a million visit each year, for business or tourism. The UAE is Britain’s largest trading partner in the Middle East, and the UK is the UAE’s third biggest partner in non-oil commodities trade. Britain is one of the largest investors in the UAE, which also has many major investments here.

Britain played a key role in establishing the UAE and its military forces — which originated in the British-led Trucial Oman Scouts. UAE forces also fought with in the 1990-91 Gulf War along with the US coalition and with NATO forces in Kosovo. It was also the only Arab nation, which deployed troops in Afghanistan during the 20-year US-led campaign, conducting combat operations alongside other coalition forces and providing significant humanitarian aid.

Besides assisting the British evacuation from Kabul, the UAE Air Force played a major role of its own in the operation, and the country is now hosting thousands of Afghan refugees.

Due to the threatening bloom of jihadist forces in Afghanisatn, Britain’s alliance with the UAE will become increasingly important. Some key portfolios in the new Afghan government have been entrusted to hardened terrorists Ken McCallum, Director General of MI5, Britain’s lead agency on countering terrorism, warned last week of a greater threat to the UK in the coming months and years following withdrawal from Afghanistan.

In this scenario no other world leader is better equipped to help understand and contain this rising threat to Britain and its international interests than Mohammed bin Zayed, Crown Prince of Abu Dhabi and the greatest adversary of radical Islamism in the Arab world.

Sheikh Mohammed helped stem the escalating regional challenge of the Muslim Brotherhood from Egypt; UAE forces combatted Al Shabab in Somalia, supported the Libyan National Army against its Islamist opponents and fought against Islamic State in Syria and Iran-sponsored Houthi insurgents, Al Qaida and the Islamic State in Yemen.

Perhaps due to this newfound love for the UAE, Lord Trimble, former First Minister of Northern Ireland and a Nobel Peace Prize laureate, has nominated Mohammed bin Zayed for the same award in recognition of his “historic achievements in advancing peace in the Middle East”.

Britain does not agree with all UAE foreign policies — for example its support for Assad in Syria, which UAE views as a prop against Islamists as well as Turkish and Iranian aggression in Syria.

British and UAE intelligence services are close. Intelligence provided by the UAE has helped save British lives and the country is a regional-leader in combatting terrorist finance and extremist propaganda, including on the Internet. The Emirates actively share its de-radicalisation programmes and ideas with allies across the Arab world, the West and countries such as India.

Britain faces a growing de-radicalisation response, with tens of thousands on its watch lists, a growing jihadist prison population and increasing radicalisation in its universities.

The Arab disenchantment with the US over its earlier withdrawal from Afghanistan, Iranian aggression in the region and a growing nuclear threat, have forced many leaders that the Biden administration is no longer a dependable ally.

This could cause some to turn increasingly towards China or Russia; both already active in the region and on the lookout for opportunities to further strengthen their hold over the region.

The other option for protection which many Arab countries might not favour — but a far better one from the West’s point of view — is Israel, which has the most powerful military in the Middle East and the will to use it when necessary.

In recent times the change in Arab stance towards Israel was made possible by the Abraham Accords, which publicly opened the path for increased cooperation,and here too the single most important player was the UAE.

The Biden administration does not seem to much enthused by the Abraham Accords, and the best bet to the UK and other western countries in this scenario seems to be looking to the UAE’s leadership to further strengthen and broaden the regional security cooperation to guard their interests.