Siddique Kappan Gets Bail But What Was His Crime? 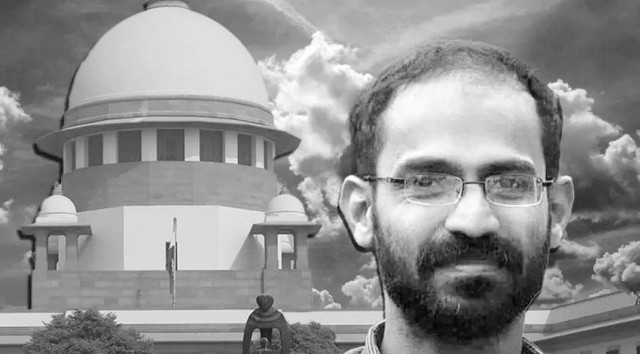 The prosecution had claimed that Kappan was carrying a pamphlet on how to protect oneself during a protest.

It took no less than 711 days for the Supreme Court to direct that journalist Siddique Kappan, who was arrested on charges of inciting riots while on way to Hathras where a Dalit woman was gang raped and murder, be released on bail.

He was arrested under the draconian Unlawful Activities Prevention Act (UAPA) as well as the British period law on Sedition.

While the intervention from the highest court has come as a relief but the fact that it took about two years for such a relief to come is also a sad reflection on our system.

On the other hand the apex court had been acting with alacrity when famous or influential persons are concerned – a case in point being that of propagandist journalist Arnab Goswami. It had been even holding hearings past night in some such cases.

Chief Justice of India UU Lalit, who headed the three judge bench which ordered Kappan’s release, did salvage the situation by stating in the open court that

“every person has a right to free expression. He is trying to show that the Hathras victim needs justice, and raises a common voice. Will this be a crime in the eyes of the law?”.

The bench said it was granting bail “considering the length of custody undergone by the appellant and the peculiar facts and circumstances of the case”.

The Uttar Pradesh police, which had arrested Kappan, came out with little investigation to establish his links with terrorists and made no significant recovery during the period.

Kappan, who was reporting for a small Malayalam news portal, azhimukham.com, was looking forward to finding new angles and facts of the incident that shook the country.

The prosecution had claimed that Kappan was carrying a pamphlet on how to protect oneself during a protest – with tips like “wear comfortable clothes” and “drink glucose”. As per the Uttar Pradesh government it was proof enough that he was educating himself on rioting.

The fact is that he was carrying a pamphlet which had lifted parts of a pamphlet on “Black Lives Matter” on how one must wear loose clothes where there is possibility of riots and how one must carry drinkable water in such situations.

Yet the police charged that Kappan was part of a larger conspiracy to “foment religious discord and spread terror in the country”, a “mastermind at evading police”, and “well aware of how to make use of legal loopholes to frustrate the criminal process”.

Despite several senior judges and experts expressing the opinion that the UAPA must be amended, it continues to be evoked even more frequently against human rights activists, lawyers and journalists.

While the Act and its several earlier avatars like POTA have been misused and abused by virtually al governments in the past, the frequency of filing UAPA cases against individuals has sharply increased in the recent past and more particularly in the states ruled by the Bharatiya Janata Party.

And because some of these governments have a tendency to book citizens at slightest of pretexts, the conviction rate in such cases is abysmally low.

The Union Home Ministry informed Parliament in August last year that 1,948 people were arrested under the UAPA in 2019. Of these, only 34 were convicted under the law. It also admitted that only 2.2 per cent of cases registered under the UAPA between the years 2016-2019 ended in convictions by the courts.

Several senior retired and serving Supreme Court judges have been speaking about the need to amend the law.

Courts have been, however, giving contradictory observations and rulings. It is high time that the highest court of the land constitutes a larger bench to study the law and comes out with clear guidelines.