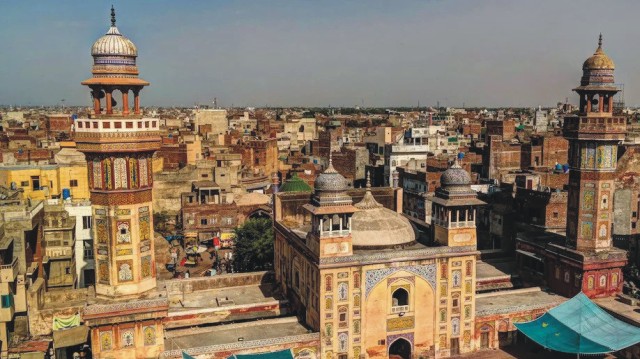 Though I have never been there, as I mentioned, I have several connections with that great cultural city.

I live in India, and have never been to Lahore, though it is my dream to visit the city at least once before I die (I am now 77).

But I doubt that I will ever get a visa to go to Pakistan, for the reason mentioned in this video, which is of a short interview of me in Fremont California taken in 2019 by my friend Haider Raza, who was originally from Lahore, but is now settled in California.

There is a well known adage ”Jisne Lahore nahi dekha woh janma hi nahi” (one who has not seen Lahore has not even been born), and I want to be born.

Though I have never been there, as I mentioned, I have several connections with that great cultural city, which I may mention.

I am a Kashmiri Pandit, but my ancestors migrated from Kashmir about 200 years ago and took up employment in the state of Jaora, which was a princely state (now in western Madhya Pradesh in India) during British rule, and served in the court of the Nawabs of Jaora for several generations.

In the year 1900 my great grandfather Pandit Tribhuwan Nath Katju, who was the dewan of Jaora, sent his son Kailas Nath Katju ( 1887-1968) to Lahore when the latter was 13 years old for his education, because Jaora did not have good educational institutions, whereas Lahore had excellent ones.

My grandfather Dr Kailas Nath Katju, who was a freedom fighter, later became a top lawyer in the Allahabad High Court, and then Governor of Odisha and West Bengal, then Home and Law Minister of the Govt of india ( in Nehru’s cabinet ) and still later Chief Minister of Madhya Pradesh, studied in Lahore from 1900 to 1905, first in Rang Mahal High School, and then in Forman Christian College, which institutions still exist today. I would like to see those institutions where my revered grandfather had studied.

Later, after Dr KN Katju had become a top lawyer in the Allahabad High Court, he would often be engaged in cases before the Lahore High Court, and he visited the city often in that connection.

My own connection with the city is very different. I sometimes claim to be an ex-Chief Justice of Lahore High Court, and that is because I had been Chief Justice of Delhi High Court in 2005-2006 (before becoming a Judge of the Indian Supreme Court).

Though I have never been to Lahore, I am very keen to see the places, and meet the people, mentioned in my video interviews by my Lahore based journalist friend Sajjad Azhar Peerzada.

Long live Lahore and its people!