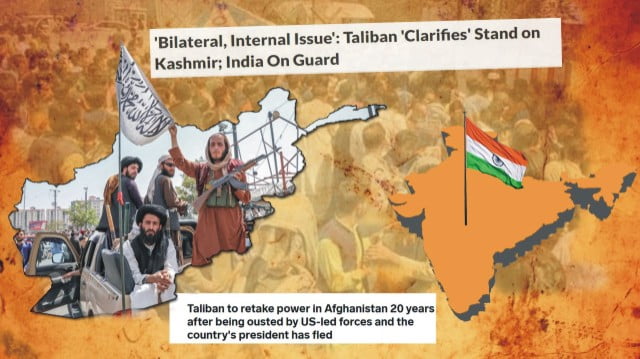 The Taliban may have a vested interest in ensuring a dispute between India and Pakistan.

Taliban regained control of Afghanistan once again. Not many in India will be bothered except some divisive forces who think of this as an opportunity to drive their respective agenda.

I also see the discussion around changes in Afghanistan mostly tactical and symptomatic. The fundamental question is why the Taliban, which means religious students, want to control that territory? Why is Afghanistan so important?

The answer to this lies embedded in Islamic texts. Afghanistan is a part of the holy land of Khurasan, which extends up to Iran and Pakistan.

Khurasan has a special place in Hadith. However, Hadith is often questioned by Islamic scholars from an authenticity perspective.

In one of the predictions (2269), it says, “Armies carrying black flags will come from Khurasan, no power will be able to stop them, and they will finally reach Eela (the al-Aqsa Mosque in Jerusalem) where they will erect their flags.” This became popular in the Jihadi network. Quite often, radicalized individuals are fed with limited visibility. But this is not all.

Just as the prophecies of Khurasan became popular during the wars in Afghanistan, the Ghazwa-e-Hind divinations became a staple of the Islamist discourse.

In another part of Hadith, Ghazwa-e-hind, it talks about “..two groups of Ummah (team) whom Allah will free from the fire, one will invade India”. There are many versions of this statement but all indicate war with India.

So, is Talibanization the first step towards many things which are indicated in Hadith? The answer may hold the key to the future changes we see. There are many different versions of the same Hadith, and hence Islamic scholars do not agree, nor even Darul Uloom Deoband (the school Taliban subscribes to) gives any stamp of approval.

The challenge is not political alone; it is an ideological challenge and more complex than we think. Pakistan may very well be imagining an advantageous position, but the smirk may not last long if the Taliban tries to pursue its core objective; it will also expand to Iran and Pakistan.

It will be easier for them to extend and cannibalize Pakistan than to precipitate challenges with India. When this is an ideological challenge, getting a political advantage may not be an excellent idea for anyone. The same will be the situation for China and Iran, who may not have considered the larger picture. Taliban does not have real friend or a real enemy, they have a purpose.

India needs to be worried and be careful. The changes in Afghanistan have been a pleasant surprise for a specific section of Indian Muslims who would not consider this bad.

Hindutva group will use this as an opportunity for fearmongering and drive further divide. A breakdown in Afghanistan will have a cascading impact on India both politically and socially.

Afghan society is multicultural. Out of its 40 million population, 40% are Pashtuns, 20% Tajiks, 25% Hazaras, and 6% Uzbeks, besides others in small proportions. Taliban is popular among this 40%, but Tajiks, Hazaras, and Uzbeks do not like them.

Historically, the Taliban was confined to Pashtun-dominated areas. Besides, In Afghanistan 65% are Sunni, 35% are Shia. It is not easy for the Taliban to control complete Afghanistan, and hence unification can only come after a lot of internal conflicts when others are first driven out. This can become another recipe for disaster.

Now let us look at the possible leadership. There are three big contenders. The current Chief of Taliban is Haibatullah Akhundzada. He is a great power to engage and integrate different factions. He is an appointed leader and chief of the Taliban.

Abdul Ghani Baradar is the co-founder of the Taliban. CIA and ISI arrested Baradar in 2010, and on the instructions of the CIA, Pakistan released him. Baradar became a key person in negotiating US exit from Afghanistan. He comes more often as the next leader of Afghanistan along with Haibatullah.

Mullah Yaqoob is the military chief of the Taliban. He is also the son of Taliban Mullah Omar, a spiritual, political, and military leader during the previous Taliban regime in Afghanistan. Unconfirmed reports indicate he is aspiring for the top post and wants to have his way. Apart from these, there are others also who want to throw their hat in the ring.

Taliban came too quickly and did not organize themselves first. They did not keep their house in order, and things changed quickly. The possibility is that they may not pick any of their known leaders and identify someone reputed and has credibility. But this may be a part of the problem unfolding next when the Taliban faction gets divided over power-sharing.

The US may have to sponsor a section of the Taliban to extract their pound of flesh. I am not sure whether this is the end game or not. If Mullah Baradar becomes the head, he may have the blessings of the US as US-sponsored Pakistan released him in 2018. Was it a part of a broader script that Baradar will be someday head of Afghanistan and Ghani will be disposed of? There are many unknown unknowns.

The Taliban’s intention will be much more apparent depending on whether they establish the Islamic Caliphate or create Emirates. There are certain sections in the Taliban keen to establish Caliphate with the Haibatullah Akhundzada as Caliph. If that happens, it is a significant change to the overall strategy, which was more incremental to a new big bang approach. We have to read between the lines as the devil is in the detail.

There is another risk. Pakistan may use Afghanistan for exporting terror to other countries. If they do, they can also precipitate conflict in the subcontinent. In addition, the Taliban may have a vested interest in ensuring a dispute between India and Pakistan, as its ideology of expansionism may require the demolition of both neighbors. Often these conflicts may have a cascading impact and may disrupt the balance of security and economy.

I see this as the beginning of an unstable future. We cannot isolate this as an Afghan Issue. We cannot ignore this and sweep this under the carpet for now. The solution can come when we understand the problem which the world is conveniently missing. Present and future are an extrapolation of the past, and history is often geography on wheels. Today’s Afghanistan may become tomorrow’s India. The Sooner we take preventive steps, the better it will be.