Afghanistan – Some interesting and unknown facts 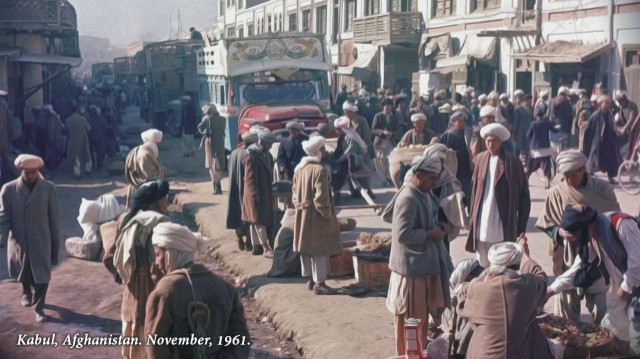 Some information that is essential to understand the past, present and future of Afghanistan.

If we do not learn from the past, we pay for ignorance in the present and future. The present is only the extrapolation of the past. The seeds of the Afghan crisis lie inside the womb of the little-known or fairly ignored history. The information provided below has been stitched from what is available in the public domain.

The etymological view supported by numerous noted scholars is that the name Afghan derives from Sanskrit Aśvakan, q.v. the Assakenoi of Arrian. Many scholars support this view. The earliest mention of the name Afghan is by Shapur I of the Sassanid Empire during the 3rd century CE. In the 4th century, the word “Afghans/Afghana” was used to refer to a particular people mentioned in the Bactrian documents found in Northern Afghanistan. To date, this debate about origin of the word Afghan continues.

Nur Muhammad Taraki was a communist leader of Afghanistan. Taraki was very close to the Soviets and especially Chairman Brezhnev of the Supreme Soviet. Taraki was ousted in a coup led by his deputy Hafizullah Amin.

Later, Amin allegedly assassinated Taraki. This assassination in Kabul made Brezhnev furious. Under the influence of alcohol, Brezhnev ordered the invasion of Afghanistan and avenged the Nur’s death.

Soviet Special forces eliminated Amin, and Tanks rolled in Afghanistan as Brezhnev suspected the CIA might have infiltrated in his backyard. A Kremliner insider for more than 4 decades later revealed that the entire decision to invade at night was more emotional and under the influence of Vodka.

That is also true as Amin was close to the US and Pakistan. Indeed, this invasion of Afghanistan was not planned, and later, things went out of control for the Soviets.

During the rule of communists in the 1970s, Afghanistan was progressive and Afghan society was very open.

Women and men had almost equal opportunities, and education was encouraged.

In some senses, it was ahead of others till the Taliban came pushing it backward by decades. Taliban started making its presence felt in 1996 after they took control.

The transition of Mujahedeen to Al Qaida?

Mujahid is a term used for Islamic Warrior engaged in Jihad. Mujahideen (Plural of Mujahids) were very popular among the fighters sponsored by allegedly the US (CIA) in Afghanistan. It was a coalition of weakly held warrior groups in Afghanistan. This group caused severe damage to the Soviets and forced them to exit.

But once the Soviets retreated, these groups fought among themselves. In 1979, Osama Bin Laden came to Pakistan and joined this Mujahidin group.

But exactly after ten years, in 1989, Laden formed his militant group splitting out of Mujahids and called it Al Qaida. By that time, Bin Laden was close to the CIA, ISI, and other intelligence networks and acted as liaison men. The formation of his militant group largely remained secret.

Since Mujahids were fighting among each other post-Soviet exits, another development took place in Afghanistan. With the complete backing of Pakistan, Mullah Omar created another fighting group called the Taliban in 1994. In Pashto, it means students, which indicates the knowledge seekers of Madrasas (religious schools) where most of their warriors grew. They learned extreme forms of Islam in Madrasas from Saudi clerics who were experts of Wahabism.

The Taliban group grew with the support of Pakistan, more people joined. Omar fought and won the provinces, and by 1998, his Taliban controlled most of Afghanistan. Taliban was mostly dominated by Pakistan nationals supplied by ISI from Pakistan.

As per the information in the public domain, nearly 30,000 Pakistani fighters, 15,000 Afghan Taliban, and 3000 Al-Qaida Arab fighters constituted the force of around 48,000 fighters. Post 9/11, many of these Pakistanis, who were believed to be part of their armed forces personnel, were airlifted from Kunduz, which was closely observed by Indian Intelligence.

Osama Bin Laden wanted to strengthen the ties between his Al-Qaida and Taliban and created family relations. Ethnic entanglement was encouraged by the Taliban between Afghans and others. Many Afghan women were married to Saudi fighters.

It also involved Egyptians and other nationalities as well. As per some intelligence inputs, Omar was married to Osama’s daughter, and later Osama married Omar’s daughter. However, the marriage of Osama to Omar’s daughter remains a mystery as both Taliban and Al-Qaida never confirmed it. Technically, if this was true, one of the key contenders for the top post, Mullah Yaqoob, is the grandson of Osama.

Both Taliban and Al-Qaida are Sunni Muslims, but Talibanist does not subscribe to Wahabism as it does not gel with the culture and practices of their upbringing as Pashtuns.

This matter is contrary to Al-Qaida as Wahabism primarily influences them. Contrary to this Taliban subscribe to Darool Uloom Deoband.

However, there are many hardliners with Taliban who are also influenced by extreme forms of Wahhabism. Many of them deserted Mullah Omar and joined ISIS.

There are ideological differences between Afghan Taliban and Tehrik-i-Taliban Pakistan (TTP or Pakistani Taliban) which at times translates into conflicts.

Are Pashtuns the lost Jewish tribe of Israel?

Afghan Society is divided into various ethnic groups. There are 40% Pashtuns, 37% Tajiks, 9% Hazaras, 9% Uzbeks, along with others.

An interesting fact about Pashtuns is that they are believed to be descendants of Jews.

It will be hard for the Taliban, but considerable research on their lives, rituals, practices, and beliefs point to that direction.

However, genetic analysis is yet to establish that fact. One Pashtun tradition asserts that they are descended from Afghana, grandson of King Saul of Israel.

It is also widely believed that Pashtuns are the 10th lost tribe of Israel. However, there some scholars disagree with these findings and views.

Strained ties between Osama and Omar?

As per the son of Osama, his father was insulted by Mullah Omar, who initially did not want to hand over Osama to Americans. But something changed later, and he was not very kind to Osama. He even went ahead badly insulted Osama to the extent Osama was asked to sit on the floor in front of him.

Mullah Omar was heard saying to Osama, “It is best if you and your men leave Afghanistan.” The whole conversation you can read in the book Growing Up Bin Laden: Osama’s Wife and Son Take Us Inside theirs.

There are many more surprisingly ignored facts, some of which may not be entirely true as well. But ignoring the curated facts from history can lead to an uncertain and unpredictable future. Some information here can be new, and some are surprising, but they are essential to understand the present and future of Afghanistan.