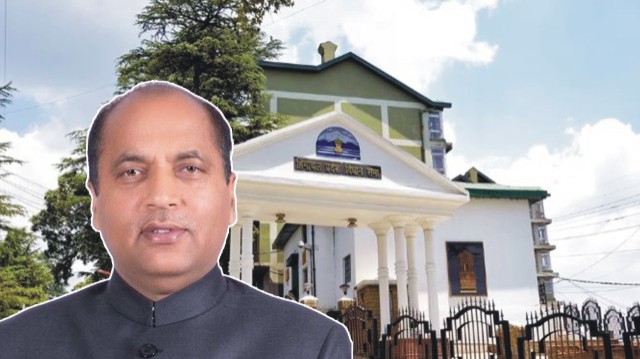 Jai Ram Thakur believes in doing his duty and hard work and leaves the rest to destiny.

In a work environment that rewards devotion to duty, steadfast loyalty and firmness in ideological commitment, it was not surprising that Jai Ram Thakur was slated for a calling to serve the masses and shape their lives, and future.

The ascendency of Jai Ram Thakur, a richly experienced MLA, a minister and dedicated RSS worker was never in doubt, as he grew from strength to strength with each of his assignments and has now completed three years as the Chief Minister of Himachal Pradesh.

Unfortunate for him that Covid 19 pandemic interrupted his forward-looking agenda for Himachal Pradesh. The CM and his supporters hope this disruption is only temporary as vaccination would result in stepped up economic activity, and more important, lead to an overall buoyancy in sentiments.

His first year spent in getting a grip on the administration and the second to launch his agenda and began quietly consolidating his position. The highlight was the Investors Meet at Dharmashala, blessed by the Prime Minister Narendra Modi and union Home Minister Amit Shah.

Does his work so far help him and the BJP win again in assembly elections to be held next year?

The Chief Minister, of course, presents a long list of achievements.

BJP national president Jagat Prakash Nadda praised the Chief Minister for his dedication to work for every section of the society and lauded his efforts to develop every region of the state in a message to the Chief Minister. His message to the function celebrating the third anniversary of Jai Ram Thakur government was read out by BJP general secretary Trilok Jamwal.

Because of Corona pandemic, the celebrations were scaled down to meet the social distancing norms, the CM said. The state government was providing social security pension to 5.70 lakh eligible people. The Jan Manch and Chief Minister Sewa Sankalp Helpline-1100 were started by the state government for speedy redressal of public grievances.

The ‘Grihini Suvidha Yojna’ has been launched under which 2.90 lakh free gas connections have been provided to the eligible families and this scheme has made Himachal Pradesh first ‘Smoke Free State’ of the country.

CM Jai Ram dwelt upon the MoUs worth Rs. 96,000 crores signed during the ‘Global Investor Meet’ organised last year at Dharamshala and within a month ground breaking of Rs. 13,500 crores was performed. Out of this, work on projects worth Rs. 10,000 crores has already started, he claimed.

‘Prakritik Kheti Khushal Kisan Yojna’ has been launched to promote natural farming and as many as one lakh farming families have adopted it so far.

Need for neutral analysis of claims

The claims of the government need to be assessed with a reality check on the ground, if the people really benefit from the same. So, I will touch upon major areas which are connected with style of functioning of the government and the impact of the policies on the life of the common man.

BJP government is likely to make Jan Manch programme as key issue in 2022 assembly polls because it feels that new idea has been a great success, though reality check could be very different. Observers feel that there is no mechanism to cross check the delivery of these services and feel these claims could prove counter-productive.

Officials point out excuses of lack of budget, violations of rules and regulations by VIPs, whereas the CM, ministers and MLAs accuse the bureaucracy of non-cooperation.

AS per official data, 47,583 complaints were received in these Jan Manch programmes held in different parts of the state up to February 17, 2020 prior to outbreak of epidemic and 43,158 complaints have been redressed.

State Government launched Chief Minister Helpline 1100 and it became fifth state of the country to provide such service, more than 2,55,103 calls were received out of which 60,473 were complaints through this helpline. But officials are silent on record of delivery on the ground.

Dealing with opposition in assembly

The three-year stint of the Chief Minister was also marked by stiff opposition from Congress legislature party leader, Mukesh Agnihotri who left no stone unturned to hit out against the government.

CLP leader worked in tandem with all party MLAs who made concerted efforts to put government on the mat on several sensitive issues. Agnihotri made it clear that government did not come up to the expectations of people and wasted three years in unproductive things.

CM Jai Ram Thakur and his ministers attacked the CLP leader in assembly who was unrelenting in the house and outside also. CM ridiculed CLP leader for raising non issues which were irrelevant.

Analysts differ on the issue of corruption, which may or may not fetch votes to ruling party.

BJP government in its over enthusiasm had ordered more than 100 inquiries when it came to power in December 2017 against members of the previous Congress regime. It is learnt from secretariat that majority of these inquiries have fallen flat as there were no documents or evidence to bring the corruption cases to their logical end.

In some cases, government could have exposed corruption but it lacked commitment and resolve. Now no one in government talks about issue of corruption, which was witnessed during Congress regime also.

One can describe it as sheer instance of honesty when Chief Minister Jai Ram Thakur admits to press that some of the bureaucrats are not cooperating with government in the implementation of policies and programmes, which is unacceptable.

It is an open secret that bureaucrats are politicised, and it is an established practice that pro-Congress dispensation have been put to freeze when present regime assumed office and pro-BJP officials got plum postings.

Observers feel that CM Jai Ram ought to have dealt with negative elements in bureaucracy with an iron hand and could have ensured it was different from the previous Congress regime that was highjacked by former chief secretary V. C. Pharka and his coterie comprising Tarun Shridhar, T.G.Negi, Shrikant Baldi (earlier favourite of Congress Chief Ministers also won ‘confidence’ of Jai Ram Thakur hence got a ‘suitable plum post’ of Real Estate Regulatory Authority), though EX CM, Virbhadra Singh was credited with being in this chair for 6th time.

The CM’s detractors from Dhumal group have confirmed that such a coterie exits in this government also and compare the current situation with the previous Congress regime as some bureaucrats are showing negativity hence ignoring even CM, ministers, MLAs etc.

Now CM is under obligation to punish unwilling officials otherwise damage will be irreparable.

Pakistan faces prospects of being blacklisted for global ter....

Nepal Prime Minister’s Defeat In Parliament Is A Good Omen....

The Saga of Modi’s Success in Halting India’s fight agai....