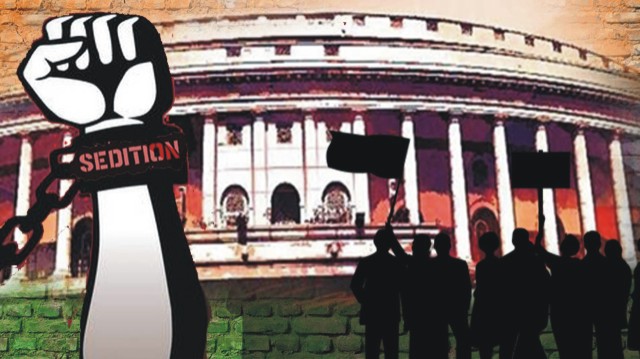 India leads the world in the registration of cases for sedition.

THE ARREST of a 22 year old girl on charges of sedition and the recent slapping of charges of sedition against leading journalists including Anant Nath, Rajdeep Sardesai, Mrinal Pandey besides senior congress leader Shashi Tharoor have against brought into focus the outdated and archaic law of sedition.

There has been a steep rise in the incidences of the state charging people for sedition against the country. This is often being done on frivolous grounds and against people whose loyalty and respect for the country is totally above board.

The sedition laws, which were introduced in the country by the British rulers, were aimed at curbing the voices of dissent against the British rule and were used selectively against leaders like Gandhi ji and Lokmanya Tilak, both of whom were found guilty and imprisoned.

The immediate provocation for introducing the laws in 1870 was that the then British government in India feared that Muslim preachers on the Indian subcontinent would wage a war against the government. The need was particularly felt after the successful suppression of Wahabi/Waliullah Movement by the British.

It is ironical that while the British, who introduced the laws in their own country in 1832, abolished these in 2009, we continue to have these in our statute books. Even in 1832 it was a non cognisance offence and carried a maximum sentence of two years.

India, on the other hand, has not just retained the law but strengthened it in 1973 by amending the code of criminal procedure by extending the maximum punishment to life imprisonment.

Data from the National Crime Records Bureau’s report on Crime in India statistics for 2019 confirm the fact that there has been a steep increase in booking people under these laws since the advent of the Modi government. Ninety-three cases of sedition were filed in 2019, which is a 165 per cent jump from 35 in 2016.

While the data for 2020 is not yet available, the following few instances would speak loudly about the misuse of the law as well as its rampant use.

In February last year the country witnessed the bizarre example of the misuse of the sedition laws, which shock waves across the country and the world, involving filing of a sedition case for a school play staged in the remote town of Bidar in Karnataka! The principal of the school and the widowed mother of a nine years old girl were arrested and sent to police remand.

A few months later, 49 prominent personalities were booked for sedition. All that these personalities, including historian Ramachandra Guha, actor Konkana Sen Sharma, and filmmakers Mani Ratnam and Aparna Sen, had done was to write an open letter to the Prime Minister to express concern over incidents of lynchings in the name of holy cow.

Over the last few months sedition have been lodged against citizens including poets, film makers, journalists, political leaders, social workers and intellectuals.

No wonder India leads the world in the registration of cases for sedition. Ironically, it is the world’s largest democracy which has the dubious honour of having the maximum number of sedition cases. Most, of course, on flimsy grounds as narrated above. Many of these pertain to critical issues concerning individual freedom and rights, sedition, criminality, gender issues and huge powers vested with the authorities.

And now we have a similar case against the 22 year old Disha Ravi who allegedly prepared a plan of action for the farmers agitation. Similarly journalists and senior politicians have been charged with waging a war against the country. Evidently in an attempt to harassment them, similar cases have been filed against them in different parts of the country.

But even in these dark times there are signs of hope. A Delhi court on Tuesday said that sedition charges should not be invoked “to quieten disquiet under the pretence of muzzling miscreants” while granting bail to two persons arrested in connection with the unfortunate Republic Day violence in the national capital.

These observations were made by Additional Sessions Judge Dharmender Rana while granting bail to the two accused for circulating misleading videos on social media. One of the accused, a labourer, was arrested for circulating an old video of some policemen to appear as if it was recorded on the Republic Day.

The demand for scrapping such laws is decades old and Malimath committee set up by former Union Home Minister Lal Krishna Advani had first recommended several changes to the IPC and the CrPC. However the governments have been reluctant to undertake any drastic changes.

The government had last year set up a committee to identify outdated or archaic laws which were initially enforced to protect British interests. Hopefully the committee submits its recommendations expeditiously and the nation can get rid of laws dealing with sedition or like the criminal defamation laws. One can only hope against hope that the current government does that.

Also Read: When a Government is Rattled by Twitter posts, Toolkits and Unsaid Jokes