The destruction of academic rigour in India 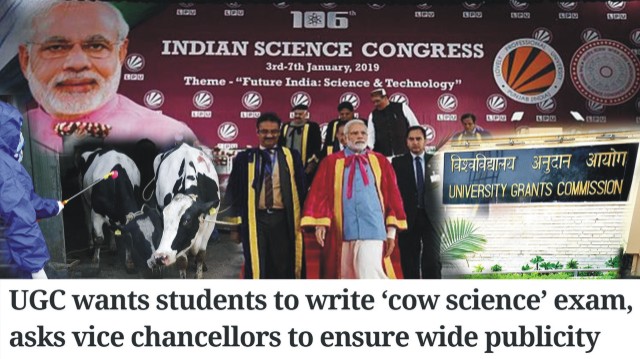 The University Grants Commission of India (UGC) wants students all over India in all educational institutions to take the ‘cow science’ examination on 25th February.

This is how academics has been perverted in our country, and those who were supposed to set high and rigorous academic standards have become toadies and lackeys of our rulers, who have feudal, medieval, and reactionary mindsets.

Something similar has been happening in the annual National Science Congresses, where false and absurd theories are propagated by the ‘scientists’ who have kowtowed before the ruling party‘s philosophy that ancient India had aeroplanes, guided missiles, atomic bombs etc, and knew head transplants, genetic engineering, etc.

It reminds one of what happened in Germany during the Nazi era ( 1933-45 ). Before the Nazis came to power in 1933, German universities and scientific institutes had a very reputation throughout the world as centres of excellence. They produced great scientists like Max Planck, Einstein, Heisenberg, Otto Hahn, etc who won Nobel Prizes.

But after the Nazis came to power in 1933 most German academicians surrendered before Hitler and prostituted themselves by advocating pseudo ‘Aryan science’ and propagating the Nazi racial theory.

Something similar has happened in India.

Also Read: Indian Science Congress: Lovely now, but ‘Wouldn’t it be Loverly’ in the future?