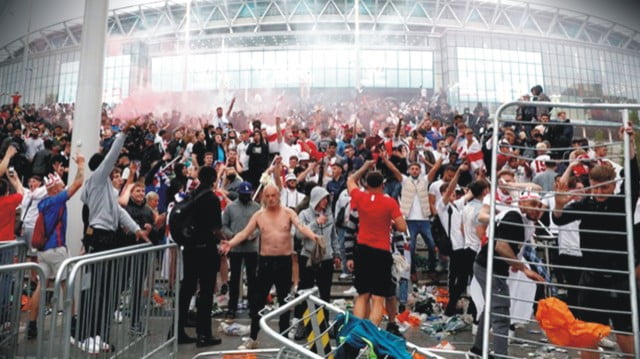 But we must also see the good things in Englishmen.

These days there is a lot of criticism of the misbehaviour of Britishers after England lost to Italy in the Euro Cup football final at Wembley Stadium. Many people are depicting all Britishers as rowdies and hooligans.

But let me tell my own experience.

Many years back my wife and I were in London. We went to a restaurant for dinner, which was a few miles from where we were staying (in a relative’s flat in Greenwood). After dinner we decided to walk back. At a little distance my wife twisted her ankle, and could not walk further.

It was late, maybe after 11 p.m. and we could not find a cab. We were wondering what to do when a car came and stopped beside us. A young man got off and asked our problem. I told him our predicament, and he said “Don’t worry sir, hop in”.

He took us to the flat where we were staying, and asked whether we needed medical help. We said no, and thanked him. He said “No problem” and drove off.

Now this young man was unknown to us. He must have been going somewhere at night when he saw us on the road. He could have just passed by. But in the goodness of his heart he stopped and helped us, seeing that we were in trouble.

I can also relate other such incidents of good deeds by Britishers.

Once when I was a judge of the Indian Supreme Court, my English friend Geoffrey Care, who had been a High Court Judge in Zambia, and later President of the International Association of Refugee Law Judges, came to Delhi, and I invited him to a function. In the function, one person got up and said “These Britishers oppressed us. Why should they be invited to functions in India?”.

I replied “Geoffrey’s forefathers may have oppressed our forefathers, but Geoffrey has not oppressed any of us. So why not let bygones be bygones”.

It is true that the Britishers conquered and colonised many countries by force of arms, and did horrible misdeeds.

But we must also see the good things in Englishmen. By their historical struggles in the 17th century they gave the world democracy. They gave us the great English literature, Chaucer, Shakespeare, Dickens, Shaw, etc. They gave us Newton, perhaps the greatest scientist of the world.

Winston Churchill hated Indians, and did not want us to be free. But as Prime Minister he inspired the British people to bravely fight against the hideous and monstrous Nazis, at a time in 1940 when England was isolated.

So all people have good and bad points. We Indians too have both. We should see more of the good things in people rather than the bad things.