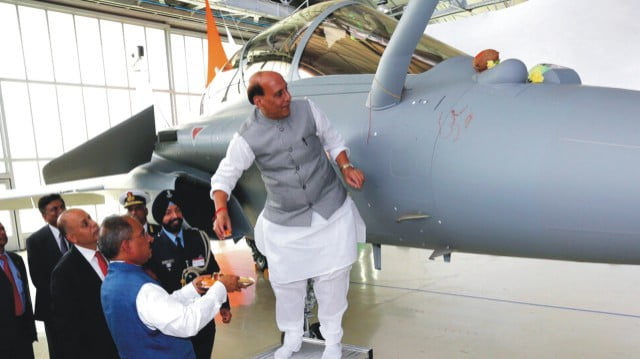 Rafale controversy was earlier put to rest by Supreme Court. However, there are series of events that have brought it back. Unfortunately, mainstream media in India did not aggressively point out what has led to the reopening of the investigation.

In 2019 the former head of the PNF, Eliane Houlette, dismissed an initial complaint filed by Sherpa. Sherpa, founded in 2001, has set its mission to protect and defend victims of economic crimes.

Parque National Financier (PNF) is National Financial Prosecutor’s Office, a French judicial institution created in December 2013 and is responsible for tracking severe economic and financial crime. Eliane Houlette retired from her role in PNF in April 2019.

The current head of PNF Jean-François Bohnert found merits in some of the latest facts presented by Sherpa, decided to support the opening of a probe after Sherpa and Mediapart updated the complaint with details from Mediapart’s recent “Rafale Papers” series of investigations.

Mediapart is an independent French online investigative journal created in 2008 by Edwy Plenel, former editor-in-chief of Le Monde. Mediapart is published in French, English, and Spanish.

As per reports published in Mediapart, French PNF has opened a Criminal Investigation in June 2021, led by an independent magistrate, who will investigate the Rafale matter and the extent of involvement of various stakeholders, including former President Hollande current president Macron.

The issue will have profound implications. It may come under the preview of the OECD Anti-Bribery convention if proven guilty and various other provisions that may have consequences within and outside France for everyone involved and any reputational damage.

The Rafale probe is also expected to investigate the various connections and interconnections between the parties involved. It may get into the alleged personal favors extended to multiple parties and relationships, indicating quid pro quo. The Rafale case will have consequences for businesses, officials, and leaders who have the skin in the game.

French publication Mediapart goes to an extent to claim “In an extract from one of the documents obtained by Mediapart detailing the agreements between Reliance and Dassault, Anil Ambani’s group was handed the mission of “marketing for programs and services with the GOI” – the acronym for “government of India.”

If these findings are correct, it may become concerning as the questions are being raised on the nature of the partnership and the roles played by various parties.

A detailed series of events was published under the topic “François Hollande, his partner’s film, and the French fighter jet sale to India.” As per the information available, there is a possibility that this may also be investigated.

Current French President Macron, who was at the time Hollande’s economy and finance minister, was allegedly involved in a decision on a tax waiver as reported by “Le Monde”, a French publication. French authorities have denied any wrongdoing and claimed it is a part of the settlement process.

While the French side is investigating these facts and may arrive at a conclusion later, it makes the situation very concerning. If PNF can establish that someone committed offence on the French side, it was not in isolation, and it was not without the involvement of people from India’s side.

While we hope for truth and propriety to prevail, the bitter truth will come with its own risk. It may have negative implications for the future of this deal. Besides, it may have reputational damage that will be long-term for those involved. It may put the Rafale contract in jeopardy if there are actions on any party that may adversely impact India’s advantage with Rafale.

PrevPreviousNYT advt for a job vacancy — Why all the fuss?
NextUrdu poetry and the transitional eraNext
Author Related Post
Related Post