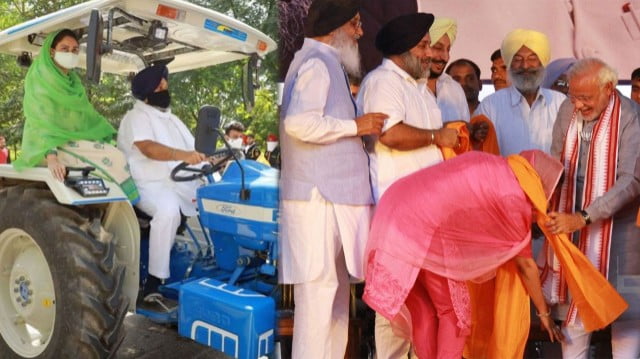 The SAD-BJP alliance has been a marriage of convenience and one not based on ideology.

THE Shiromani Akali Dal proved correct the adage ‘a week is a long time in politics’. Last week SAD’s sole union minister resigned from the Cabinet and last night – after over two decades of support – the party withdrew from the National Democratic Alliance and parted ways with Bhartiya Janata Party. The given reason: Farm Bills.

The BJP’s bulldozing the Farm Bills through the Parliament has indeed made the SAD’s position untenable and they had no choice but to resign and part ways. For SAD – a party whose history is rooted in Sikh religious identity politics and whose voter base is almost entirely farmers – this is a huge step. Yet, this is not the only reason.

For the last few elections there has been rumbling between BJP and SAD in Punjab politics. When the alliance began in the late 1990s, BJP was a relative newcomer, it needed to draw as many anti-Congress parties together as it could. SAD was a natural choice.

In the late 1990s a leading Sikh intellectual had opined: ‘Fire and water can never co-exist. The SAD-BJP alliance is a marriage of convenience and one not based on ideology.’ The SAD, a hundred years old party, is premised on the Sikh religion which stands for justice and equality. The BJP is a right-wing Hindutva nationalist party that believes in and works with the caste system.’

That the marriage of convenience has taken so long to result in divorce has been at considerable cost on SAD’s part. Consider for example two laws that BJP brought in recently and SAD was forced to vote in favour of them. 1) Abrogation of Article 370 and 35A in Jammu and Kashmir and dissolving the state into union territories; 2) Citizen (Amendment) Act and the associated National Register of Citizens.

Given the principles of Sikh religion, that is when SAD should have walked out of the Cabinet and on BJP. That would still have been credible. Now, when they have resigned and opted out, no one in Punjab is talking them seriously. That is their pathos. That is why though SAD has given up its full stake, this is still being seen as ‘too little, too late’

The rumblings between SAD and BJP over the last few elections is related to seat sharing arrangement in Punjab. SAD is more a rural voter party and BJP is an urban trader party. As rural migration peaked, towns and cities became bigger, the BJP sought more than its regular 23/117 seats share but the SAD was reluctant to part with seats. This brought the two parties close to separation a few times earlier as well.

However now, as long as the BJP stays with the Farm Bills, the party has also lost the perception game in Punjab. The people, not only famers but even urban traders – their traditional vote bank – have turned against it. That is because the Farm Bills adversely affect the arthiyas as well. There are announcements being made to not allow any BJP member to enter villages, to not listen to them even though the prime minister tweeted in some Panjabi-Hindi mix but in Gurmukhi script.

Basically, no one in Punjab cares any longer for propriety. The Farm Bills are a matter of life and death for the economy of a society that is more than 80 per cent dependent on agriculture. About thirty farmer and labour unions which are leading the protest and rail roko are dead against any party, most of all SAD, appropriating their protest.

The issue is deeper than Akalis parting ways or BJP’s perception in Punjab at this time. The real issue is federalism. The BJP’s Demonetization to Goods and Service Tax, to amending Labour and Cooperative laws are all a push towards greater centralization of the Indian state. The real need of the hour for a nation as diverse and multi-layered as India is greater federalism.

Will the Akalis now join in the fight for federalism or will they remain symbolic in their gestures? Will they fight for more powers to the states, to all states? Will they remember their Anandpur Sahib Resolution and act accordingly?

The BJP can easily use state tools such as the Central Bureau of Investigation and National Investigation Agency and the Income Tax and Enforcement Directorate to harass the current Akali leadership. Its top leadership has enough cases pending that can be used to reign them in. What then?

The space has just opened up and we need to see how it develops. The worst prospect would be if the Akalis now, like another long-term ally of the BJP, the Shiv Sena re-enters an alliance to fight state elections, fights elections jointly, and then parts like it did in Maharashtra. The people of Punjab cannot be made a ball of ping-pong in this game.

Punjab has to decide whether it is going to bear the ecological burden that the Indian state put on them through the Green Revolution. Punjab has to introspect whether its people are further going to destroy their ecology and ground water. India has to decide whether it wants to join Punjab in the battle for greater federalism. A few leaders, even an old political party, do not really matter. It is the people who matter.

Also Read: SAD-BJP rumblings: what about Sikhs who live in India but outside Punjab?