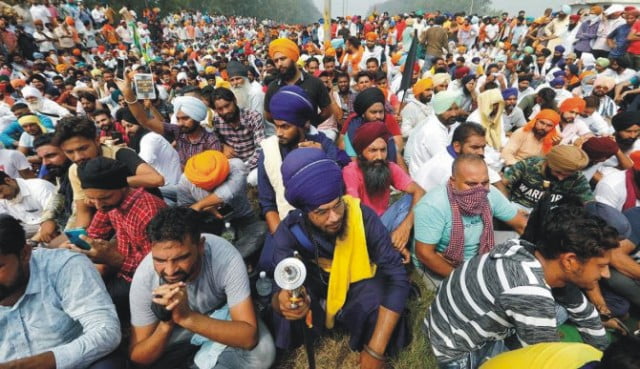 IF THE TIMES were ordinary, the September 25th Bharat Bandh by farmers and labour in many parts of the country would go down as a Red-letter day in history. Punjab, Haryana, Rajasthan, Uttar Pradesh, Karnataka, Maharashtra, Tamil Nadu, Kerala were all sealed, closed. It was a huge demonstration of anger against the three new Farm Bills passed by the Parliament.

Yet, if one were to look at media that is already in the lap of the government, the news of the day was a Bollywood actress being interrogated by the Narcotics Control Bureau over some flimsy allegation on use of cannabis – a substance much abused by the sadhus of the nation. The anxious government even tried another distraction: declaring Bihar election dates.

Yet, the nation knows what was yesterday’s major event. While almost all celebrities, including Bollywood, servile to powers that be, remained silent, most Punjabi singers lent their support to the protest. It is to the protestors’ credit that everything remained absolutely peaceful – there was no violence of any kind.

Thousands upon thousands of farmers and labourers, ten major trade unions, opposition political parties Congress and Left, even the ruling Bhartiya Janata Party’s ally Akali Dal – whose minister recently resigned from the Union Cabinet – joined in or supported the protest. This was perhaps the first time in the history of independent India that Bills that had passed the Parliament drew such a vast protest.

Such protests normally take place when a government makes its intention known, makes a speech, sends a circular, the matter with a Select Committee. That helps the government gauge the public mood. Yet, this time the protests took place at this stage because the government gave no opportunity for discussion on the Bills.

The government brought the Ordinances in stealth during the ongoing pandemic. It bulldozed the Bills through Rajya Sabha breaking all time honoured conventions of the august House. Now all that awaits the Bills from becoming Acts and thus law is a nod from the President. The nation’s eyes are on the President – would he reject the Bills and become a people’s hero or would he meekly sign and devalue his honourable chair?

In any case, Kerala and now Punjab have decided to approach the Supreme Court. Maharashtra has declared it will not implement the new laws if they come into being. Agriculture is, after all, a state subject. The Centre cannot dictate to the states. Especially when its previous slogan ‘One Nation One Market’ for Goods and Service Tax has proven to be a dud, it cannot reinvent the same slogan for agriculture.

The GST proved so banal that recently the government lifted its hands and told the states to borrow from the Reserve Bank of India. Borrow what? The amount people from the states had already given as taxes to the new tax regime. It cannot get more ridiculous than that. Now there is evidence from the Comptroller and Auditor General that the Centre allegedly fudged data on Re 47,000 crore and placed it in its own, instead of the sates, kitty.

Given not only the three farm Bills which have deeply disturbed the agrarian sector – over fifty percent of our society – but even other Bills hastily passed through a depleted Rajya Sabha because Opposition was boycotting it, on Banking – Cooperatives, on Foreign Contribution (Regulation) Amendment Bill, on Labour laws, on Healthcare, the impact on the whole of Indian society will be humongous. The Bharat Bandh yesterday is an indication of the chaos to follow.

It is well established that until now the BJP has never backed down from its orders. Constitutionally, it all now depends on the President. Democratically, the people of the nation will have to wake up and protest. Farmers and labourers have shown the way and will continue to do so. States that are already defying the draconian diktats are taking critical steps. These are the only ways left to preserve some semblance of democracy in India.

One is tempted to tweak a time-honoured slogan: people of the nation unite; you have nothing to lose but bad laws!