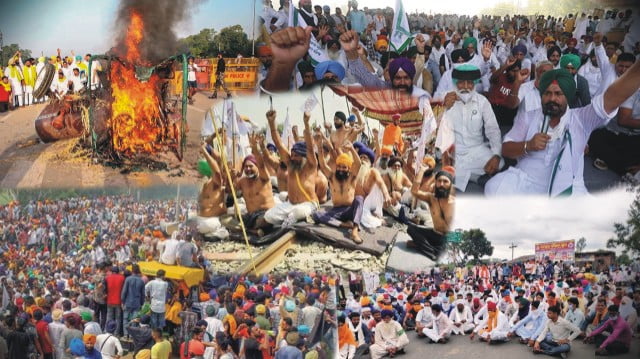 The key factor behind the swelling crowds in protests is not just the Farm Bills but much deeper – the sense of historical wrongs with Punjab.

THE PUNJAB AND HARYANA and rest of India protests against the Farm Bills go on in spite of the Presidential nod. This is an indication that more than half of India’s affected society believes that the Laws are wrong and remains committed to registering its protest to the Bharatiya Janata Party government.

Given how MSP is anyway claimed by 6 per cent of farmers, mostly on wheat and paddy, by farmers of Punjab and Haryana, these two states remain in the forefront on the protest. As of now, if the protests continue, the BJP will be forced to bring in amendments to the new laws to satisfy if voters. Else, BJP will be consigned to history.

In Punjab, where more than eighty per cent society is dependent on agriculture, the farmers, the labour, the small shopkeepers, the arthiyas are all on protest across the Sikh and Hindu and Jutt and Dalit and gender divide. In a long time now, the people of Punjab are united and on the streets against these draconian laws.

A respected academician opines: Punjabi Suba issue (1950s and 60s), Dharam Yudh Morcha (1980s) were both divided into Punjabi/Hindi, Sikh/Hindu, Akali/Congress. Farmer movement (1984), White Fly (2015), sugarcane and so on have been about farmers and later farm labourer. Kiranjit incident (1997) was in a special area (Barnala). Dera Sacha Saudha (2007) or Sacrilege of religious texts (2015) were mostly Sikh issues though Punjab did burst out in non-violent, peaceful protests. Dera Ballan (2009) was mainly a movement of Dalits of Doaba.

One of the major reasons for the youth inspired to join the protests is because prominent singers are lending their support. In many ways this is a good development for often celebrities remain cagey and do not join the masses. The celebrities who celebrate the feudal basis of Jutts and guns realise their own subject – the culture they seek to represent – is on the verge of erosion.

It is jarring that singers are positioning themselves against farmer unions who for decades have held aloft the flag of protests. The singers might be able to attract crowds but they must realise that it is the Unions who have the experience and maturity to run a movement for days and week and even months. A mutual cooperation between singers and Unions is much desired.

As of now the protests in Punjab remain leaderless. The three political parties are looking for ways to enter the space and even appropriate the protests. Yesterday, on Bhagat Singh’s birth anniversary, Congress descended in full strength upon his memorial at Katkar Kalan. In the past few days, the Akali Dal Union Minister resigned from the Cabinet and the party broke its alliance with BJP. AAP is still finding its feet.

The Centre will try to break the protests, nullify the dissent, and roll over Punjab. Just like it bulldozed the Bills through the Rajya Sabha. Given Punjab’s history, the Centre will use the bogey term Khalistan to turn the nation’s opinion against Punjab. Given the mobilisation of masses, the big question is how to grow the strength, keep the spirit intact and the protest safe from being discredited?

Another such attempt, an old Sangh trick to deal with Punjab by notionally assuaging it. For now, it has opened up the procurement of rice. This is harvest time, Punjab and Haryana need to sell their paddy. However, once done with it, the protesters must take up the cudgels once again, return to the sites of protest.

For instance, take The Farmers’ Produce Trade and Commerce (Promotion and Facilitation) Bill, 2020. Why must it allow only intra-state and inter-state trade of farmers’ produce beyond the physical premises of APMC markets?

Punjab and Haryana are 3,000 kilometers away from Tamil Nadu and Manipur. They are one inch or a couple of meters away from Pakistan and through Pakistan to Central Asia and Europe. If farmers are free to trade their produce, let states be free to trade farmer produce anywhere in the world. The cost of transport will be much lesser and farmers will get a better price.

The key factor behind the swelling crowds is not just the Farm Bills or the call of singers but much deeper – the sense of historical wrongs with Punjab. Given this situation, those mobilising the crowds would need to find reasons beyond the Farm Bills to hold the attention of the masses. What could be those reasons?

The answers lie in history. Specifically, the charter of demands raised when the early effects of the Green Revolution were being known – the Anandpur Sahib resolution. Though a close reading of the resolution will show that more than four decades later the issues have evolved so merely holding on to an earlier charter will not help.

Also, beware of using the term. There has been enough contamination of the nation’s mind to believe it was a secessionist document when it was actually a demand for greater federalism. Just like the Rajamannar Panel Report in Tamil Nadu in the early 1970s, the West Bengal Memorandum, the demands from Karnataka, both in the second half of the decade of the seventies.

In fact, Punjab’s Dharam Yudh Morcha in 1982, a decade and half after the Green Revolution was ushered in, was akin to an earlier Punjab’s demands at the turn of the 19th Century. Even then, after the British had created the Canal Colonies and passed the Land Alienation Act, the farmers and later soldiers had carried out large protests.

Then came the Punjab Land Colonisations Bill and the increase in Water Tax Bill . The movement spread across rural Punjab with a ferocity which alarmed the British. The anthem ‘Pagri Sambhaal Jutta‘ composed by Banke Lal, editor of the ‘Jang Syal’ newspaper, was sung in a farmer rally by Sardar Ajit Singh. Eventually, afraid of losing their essential supply of prime Punjabi soldiers, the government withdrew the Bills.

It is a pity that 125 years later, the state – then British now Indian – continue to make policies which harm the farmer and against which they have no option but to protest. If history of oppression has to repeat, so do protests, the reasons will evolve.

Also Read: The SAD-BJP alliance has been a marriage of convenience and one not based on ideology.