Media Freedom in India: Situation getting worse by the day 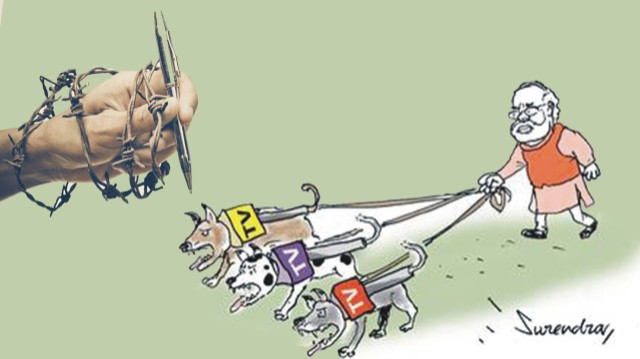 The growing support to the movement led by Jayaprakash Narayan, the ruling of a court against the then prime minister Indira Gandhi and the reflection of the people’s anger through media had led to the imposition of Emergency in 1975.

Besides political leaders and trade unionists, several senior journalists were also sent behind bars and press censorship was imposed. Some media groups held on their own and did not buckle down.

The government’s move ultimately proved counter productive and forced Indira Gandhi to lift the emergency and hold elections. The rest, as they say, is history with the Congress facing a humiliating defeat.

For several years after that misconceived experiment to muzzle the media, no government took the risk to impose restrictions on the media except the enforcement of normal laws on media and media personnel.

By all available accounts, the situation is getting worse by the day for the freedom of media and more particularly during the second innings of the Modi government.

What is highly ironic is the fact that while vast majority of media is already at the beck and call of the government and is openly partial towards the ruling party, the government is making all efforts to muzzle even the rest of the small section which tries to remain objective or could be anti-government in its stand.

There have been frequent reports of cases being lodged against individual journalists or the other “allies” of the government like the IT, ED and CBI going after them or their organisations.

Cases of sedition and defamation are liberally registered against such inconvenient individuals and organisations while threats and troll armies are let loose at anyone speaking against the government.

In the latest of series of initiatives taken by the government, a Group of Ministers (GOM) has shocked the nation by suggesting various measures to tame the critics of the government.

The ministers, including senior cabinet ministers, met six times and held extensive meetings to suggest ways to check criticism of the government.

There is no harm in the government wanting its point of view to be aired in the media and counter criticism with facts but what the group has recommended is much more than that. It talked of “neutralising” negative reports.

The word “neutralise” is itself a scary word but the report submitted by the group has more sinister suggestions.

It talked of tracking “50 negative and 50 positive influencers” on the social media and to “neutralise the people who are writing against the Government without facts and set false narratives / spread fake news”.

The group even roped in some friendly “editors” and one of them apparently gave a suggestion that journalists should be colour coded for their writing against and for the government. This would help to identify them easily.

One of the ministers suggested that a “list of media personnel and prominent persons, who are pro our line of thought – both nationally and globally, should be prepared. Few eminent academicians, Vice Chancellors, retired Indian Foreign Service officers etc should be identified who can write our achievements and project our viewpoint.”

Another minister said the government “should track 50 negative and 50 positive influencers.” The suggestion has been accepted by the GoM and the I&B ministry.

Among other action points recommended by the GoM are enlarging the Prasar Bharati News Service into a “main line news agency”. An interesting, though funny, strategies include “coordination with schools of journalism as present students are the future journalists.”

The government has so far neither confirmed nor denied the reports but these recommendations are in line with the attempts to muzzle and have a complete control over the media.

It also recently came out with guidelines for Over the Top or OTT platforms. While the stated intent is to curtail problematic content, empower viewers to make more informed choices, and create a level playing field for various mediums, some of the provisions raise serious concerns.

Firstly the registration of the self-regulatory body is subject to the approval of Ministry of Information and Broadcasting and secondly, the inter-department committee has been empowered to hear complaints referred to it by the ministry bypassing the first two levels of self-regulation. Much would however, depend on the manner in which the rules are enforced.

Reacting to the report of the group of ministers, the Editors Guild of India has expressed shock and disbelief at the manner in which the group has prepared a report with an embedded toolkit to control the narrative about the government in the media.

The guild has demanded that “the government, which is supposed to safeguard constitutional values of freedom of expression, should make it clear that it is committed to the plurality of views in the media”.

Pro-democracy Freedom House has put India in partly free for the first time in over 30 years in the light of the government’s attitude towards media and any sort of criticism. Over 7000 persons, including journalists, have been slapped with sedition charges since 2014.

For a second term government, which has comeback with even a larger majority, it does not behove well to be so sensitive to criticism by a section of media. In fact it is only helping the government to keep it on its toes and expose it to the views which its chelas and chamchas would never dare to air.