Delhi, Chandigarh stay away from farmers' shut down call 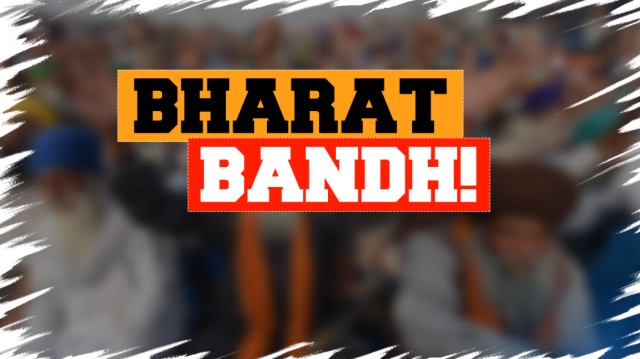 Farmers’ agitation has been marked by many such ‘bandhs’.

IN A SHOCKING jolt to the agitating farmers, the Bharat Bandh call today flopped across much of India except in Punjab and most places in Haryana where the shutdown was largely very effective. Interestingly, the two states’ capital city, Chandigarh, remained completely open with all shops and establishments functional and traffic running normally.

Tens of thousands of commuters found themselves stuck on the roads as farmer activists and their supporters blocked roads in almost all districts of Punjab and Haryana for 12 hours at a stretch.

Scores of trains had to be scrapped and stories of human suffering were dime a dozen but nearly none made it to the media that has been, whenever it could, a demi-participant in the protest.

At many places, protesting farmers were seen apologising to the commuters stuck in such a predicament but said the Bandh was a protest tactic to pressurise the Narendra Modi government to withdraw three controversial agriculture related laws, rammed through in Parliament last year.

Farmers in India have been in an agitational mode for months now and a massive sit-in on the borders of India’s national capital Delhi completed four months, an occasion the protestors marked with this March 26 Bharat Bandh call.

While farmers claim their movement has a countrywide resonance, it is largely seen as a protest led from the front by Punjab and Haryana farmer unions. Several labour and employee unions have lent support to the protests that have drawn worldwide attention.

The localised response to the Shut Down India call on March 26 in Punjab and Haryana seemed to indicate that the agitation that at one stage had threatened to spill all over India is once again confining itself to Punjab and Haryana.

The fact that Delhi and Chandigarh also failed to respond even minimally to the Bandh call pointed to a widening gulf between urbanised city centres of India and its countryside folk engaged in agriculture, directly or indirectly.

Farmers, however, do claim that their cause has the support of city folk. Incidentally, the farmer agitation has a strong support base among even fairly rich landowners who themselves have remained divorced from cultivation for decades but enjoy the rental income from their land which is cultivated by much poorer farmers.

Agriculture income in India is tax free without any cap, and many of India’s wealthy, including unscrupulous politicians, are known for parking illegally begotten wealth as farm income, thus accruing massive losses to the state exchequer.

The idea of taxing at least the very rich farmers is a red rag in Indian politics, and no government has the political gumption to push for even the minimal principle that supra-rich farmers should not avail of free electricity and water or subsidised fertilisers.

Punjab and Haryana have been ruled by farmer families for decades now, with the rulers invariably belonging to the same economic, vocational and caste structure. Punjab, for example, has always had a Jat Sikh landowner multi-millionaire as its chief minister in contemporary electoral history, and there is little chance of this changing, even though Hindus comprise nearly half the population and there are many other able claimants from among the non-jats.

Farmer leaders termed the 12-hour Bharat Bandh as an unqualified success that they claimed has sent the right message to the power corridors.

Punjab’s vernacular media, both print and television channels, remained mired in the Bandh story all through the day while it found little mention in national mastheads or news television.

Most news television anchors and reporters breathlessly reported about the “highly successful”, “total” bandh, panning their cameras up and down the empty streets and shuttered shop-fronts to backup their adjective-laced reportage.

Farmers’ agitation has been marked by many such ‘bandhs’. The one on December 8 had elicited a much wider response in Delhi, Haryana, Punjab, Maharashtra, Karnataka, Tamil Nadu and Assam.

The Samyukta Kisan Morcha, a coalition of farmers’ unions, had given the latest Bharat Bandh call days in advance but the fact that it will be a 12-hour-long shut down from 6 am till 6pm was announced less than 24 hours in advance.

Farmer agitation is now centred on thousands of them from Punjab, Haryana, Uttar Pradesh and several other states living in pop-up tent cities at Delhi borders — Singhu, Tikri and Ghazipur. Protesting farmers fear that the new laws will dismantle MSP and corporatise farming. Some pro-BJP farm unions did make early claims that they supported the new laws but they have stayed away from news cycles and radar ever since.

The Modi government had held over 10 rounds of talks with the protesting farmers, ending in a stalemate that has now continued since last December.

Farmers now plan to burn copies of the farm laws on March 28 during ‘Holika Dahan’.