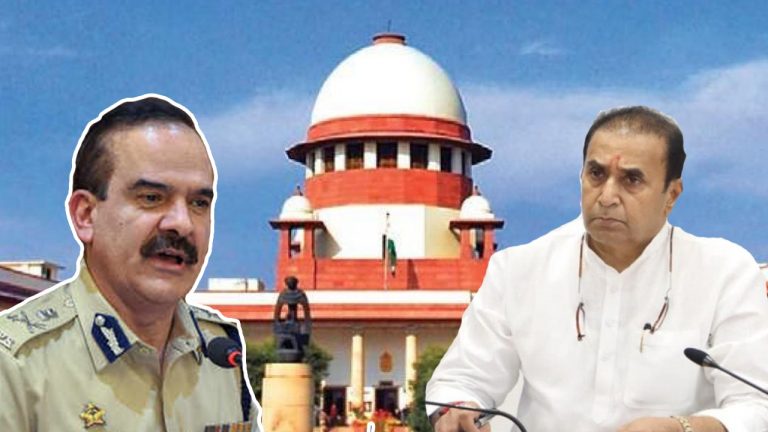 The sensational revelations made by Param Bir Singh, Former Police Commissioner, through the letter to Chief Minister post his transfer is a matter of serious debate for it has untold ramifications upon the orderly society.

Param Bir Singh also filed a writ petition before the Supreme Court, praying, among other things, that the allegations leveled against Shri Anil Deshmukh, Home Minister of State of Maharashtra.

The allegation’s crux is that the tainted Sachin Waze Mumbai Police Officer was reinstated and entrusted with the high-ranking investigation courtesy of the Home Minister of State of Maharashtra as disclosed by Param Bir Singh.

The demand of Rs. 100 crore a month from the business community of Mumbai city is not alien to the prevailing practice from the immemorial time. The close link between the Police and the Politicians is a regular phenomenon, and the tides of this corrupt nexus in the sea of corruption go higher and higher with no reduction.

It is the undisputed fact that the party in power rules through the Police. The politicians can ill afford to sever their love for the Police. Even the swelling tide of criticism by the Courts, media, social media, or any other communication mode has the most negligible effect. It can be equated with the old age adage of “water off a duck’s back.”

The Supreme Court asked Param Bir Singh to move High Court under Article 226 of India’s Constitution, for Article (supra) is having more expansive powers than Article 32 of the Constitution of India).

Undoubtedly, Param Bir Singh’s disclosures require a more profound investigation to unearth the truth behind the matter. The question that put a mark on propriety pitted with the impropriety is why Param Bir Singh observed stoic silence for a considerable time while serving as Commissioner of Police, Mumbai. However, the author is not disputing the credibility of allegations sans the investigation/inquiry by the competent authority. But the timing of revelations shocks every right-thinking person(s) as to why Param Bir Singh became wise post his transfer.

Albeit it is good to bring such issues of National importance in the Public domain. Still, at the same time, the silence on the matter for such a long time speaks differently and smack of professional etiquette. It also requires being investigated/enquired by high-powered S.I.T. under the aegis of Bombay High Court.

The Supreme Court has been rightly observed and expressed its pain and anguish over the 2006 old Prakash Singh Committee report relating to Police reform.

The Supreme Court said, “this is only a mantra recited periodically, wherever the occasion so suits. It appears that none want to give up, among other things, the control of police transfer or implement measures that would insulate the police machinery from performing its role without any uncalled-for interference.”

The truth engulfing the controversy is that no one wants that someone is checked on the person/authority vested with power lest the arbitrary exercise of powers is hindered.

Every judgment passed by the Supreme Court in any of the jurisdictions is binding upon every authority, including the Courts given the Providence of Article 141 of India’s Constitution. The same reads thus:-

Sadly, this Article is adhered to with unquotable exceptions more in contravention than bowing to the Constitutional command.

With all humility, it appears that the Supreme Court is oblivious of various salutary judgments passed in the past to uphold the rule of law and strengthen the orderly society. In all sum and reality, and indeed though decisions have vasts benignant impact upon society, regrettably, the binding ratio of judgments have been thrown to the winds, courtesy the Supreme Court itself.

As the Supreme Court never takes any follow of qua, the decisions about compliance are being made. Contrarily, when it is brought to the notice with certain exceptions, the same is ignoring. Resultantly, executives have no fear of the Courts.

Recently, the Supreme Court rightly observed in one of the orders that fear of law be inculcated among society members. It is inalienably essential to maintain the sanctity of law.

The author, with untold pains, wishes to publish the distressing and woeful note concerning the Government of Rajasthan’s propriety relating to putting Laurels over the shoulder of a tainted IPS Officer, namely, Shri Satbir Singh. He is facing prosecution under the Prevention of Corruption Act before the Special Judge Anti Corruption Cases, Kota; remained in juridical custody for a considerable time. The Government has rewarded him by promoting him to the post of DIG, Udaipur Range.

It speaks in volume as the person under judicial scanner has been promoted and bestowed with the plum posting. What message has percolated in the society, and what kind of statutory administrative justice would be imparted upon the Public.

The State Assembly debated the issue but to no avail other than the commotion and trading of barbed words between the treasury benches and the opposition. The net result is that the Public is suffering perpetually at the hands of such unscrupulous elements.

The Supreme Court was also anguished with sorrow due to the civil litigation’s insufficient adjudicatory engine; the criminal litigation has mushroomed for every civil right. The most injurious effect of the same is that it is breeding corruption at every level. India already slipped six places to 86th among 180 corrupt countries in corruption perception index (CPI) 2020, the same is very alarming and disturbing for the flourishing of the country.

The Courts concerned simpliciter could not resolve the issue. The Supreme Court has to show its teeth and grit to contain the judicial system’s menace. The Court has to exercise suo moto jurisdiction to command the Government of the day to deal with the issue holistically lest the rule of law transforms into societal/executive mutiny at the hands of resourceful, mighty persons and authorities vested with the statutory powers.

Has the Prevention of Corruption Act become redundant?....