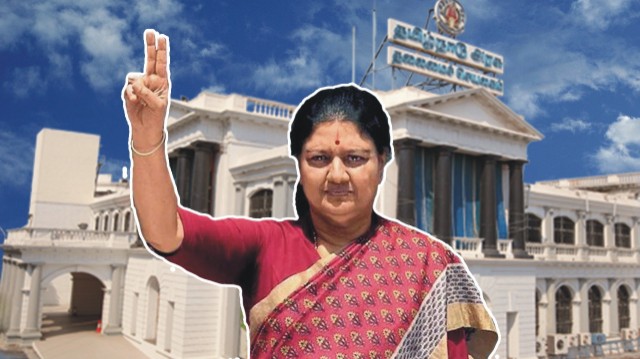 Close confidante of late Tamil Nadu Chief Minister J Jayalalithaa, Sasikala, lobbed a political googly at the proverbial eleventh hour by ‘retiring’ from politics in a renunciation of her political career and ambitions, “in the larger interests of the AIADMK and to protect Amma’s legacy from the onslaught of the DMK”.

Now by this ‘sacrifice’ Sasikala has pitched herself as a larger political figure in Tamil Nadu and her move is an extremely prudent and practical one. It gives her a chance to see how the political situation in the state emerges after the elections and then make her play.

For the present, she has understood that neither the AIDMK nor its cadres were enamoured by her presence and in fact the Chief Minister and Deputy Chief Minister were hostile to her.

If in the eventuality of an AIADMK loss, Chinnamma as Sasikala is referred to would move in for the kill and attempt a take over of the party. She has already filed a complaint in the courts that she was ousted in an illegal manner from the party and that she was the legal leader of the AIADMK.

The case is still under hearing and the next hearing is on March 15. There were indications that she might withdraw the application now that she has announced her retirement from politics.

For a person who was close to the power and some say was the power behind the throne and had a tremendous say in the AIADMK under Jayalalithaa, it is not possible that she will give up everything and go away quietly.

She has played the Queen’s gambit and is willing to bide for her time. For the present, she has decided it was wiser to withdraw, and allow the elections to be over.

Her nephew TTV Dhinakaran, though, for the record will be putting up candidates across Tamil Nadu and when last heard was welcoming like-minded alliance partners.

But sure Sasikala move has apparently hurt her nephew and his chances to be a player in the Tamil Nadu politics. But rumour mills have it that there was a backroom deal worked out between the AIADMK, BJP and Sasikala under which a few seats could be given to AMMK, the party led by Dhinakaran, if need be by putting up dummy candidates of AIADMK.

Officially all the players rule out any such development, but the voters read the sudden ‘resignation’ of Chinnamma only thus. We have to wait and watch as to how the entire issue now plays out, but on the face of it, her retirement from politics is good news for Chief Minister and Deputy Chief Minister who are now heaving a sigh of relief.

Sasikala will not be a vote cutter anymore, if her message to cadres to unite to defeat the DMK is any indication.
Her play will begin after the elections, experts from Tamil Nadu concur.

A master in backroom politics and manoeuvring, Sasikala, has always been the power behind the throne ever since Jayalalithaa burst onto the political scene in Tamil Nadu.

Sasikala, who missed being the Chief Minister of Tamil Nadu by the proverbial whisker as she was convicted for four years in a corruption case just before she was to be sworn in as the chief minister, is out of the jail, after serving out her sentence.

And the moment she came out of the jail, after treatment for covid, she declared her intentions clearly and loudly – to appropriate the legacy of Amma, whose close friend and confidante she was.

Till her sudden volte face, Sasikala was largely seen as the X factor that could upset the calculations of the political gurus of the different parties.

In fact, her grand entry into Chennai from Bangalore prison, in a huge cavalcade and the rousing reception she was given by the masses, had unnerved the Tamil Nadu chief minister and deputy chief minister.

Chief Minister Edappadi Palaniswami is not as charismatic as Amma as Jayalalitha was known. But what he lacks in terms of charisma he makes up with his hard work and has managed to govern the state well, and handled the corona pandemic well.

This is a certain plus in his favour but clearly this is not enough against a resurgent DMK that swept the 2019 Lok Sabha elections winning all but one of the 39 Lok Sabha seats from the state.

The combined vote share of the DMK and its alliance partners in the Lok Sabha general elections was over 50 per cent as compared to less than 30 of the AIADMK led alliance of which the BJP was also a part.

Now this time around too, the BJP is in alliance with the AIDMK, whose vote share had shrunk to a mere 18 percent in Lok Sabha polls as compared to 30 plus of the DMK.

Given this scenario, and going into the polls with a ten-­year anti-incumbency, AIADMK sure is fighting a tough battle against the DMK, which with its allies appears strong on paper and even on the ground.

What is a matter of concern for the AIADMK should be the 5 percent vote share that Sasikala’s nephew, TTV Dhinakaran and their party Amma Makkal Munnetra Kazhagam ran away with in 2019 general elections. Now this is a crucial vote during the assembly elections that are very tightly fought multi-cornered contests.

Now, if we take the 2016 Tamil Nadu assembly elections, there were 13 seats in which the margin of victory was less than 1000 votes, and some 66 seats where the victory margin was less than 5 percent of votes polled.

Sasikala’s announcement, and her message to cadres to unite, is a big relief to the ruling AIADMK, for the reasons spelt out above. She will no longer be a vote cutter, and thus makes the contest so much keener than before. DMK appears to be ahead at the moment, but if the AIADMK closes ranks, the race gets tighter.

The BJP has stepped into an overdrive as far as Tamil Nadu is concerned. On Sunday, Prime Minister Narendra Modi launched the party’s campaign through a series of project launches during which he outlined the various new projects and the huge sums of the money the state was allocated in this year’s union budget.

Clearly, to woo the Tamil Nadu voters who went against the national trend and did not vote even a single BJP MP from the state. In fact, the AIADMK could manage just one win from the total 39 seats in the state in the 2019 Lok Sabha general elections.

If the DMK maintains the momentum and works out it’s alliances and manages the chemistry between its alliance partners, it has a fair shot at power this time around.

Inflation goes through the roof, unemployment rising but foc....