Desecration ⁠— How we Treat The Dead? 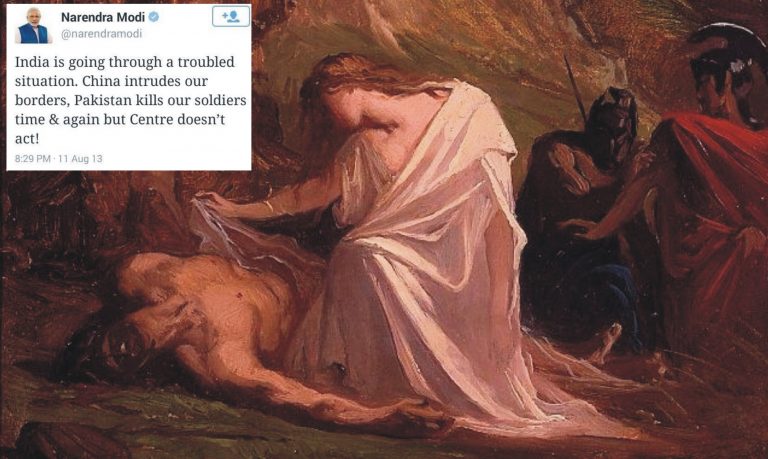 There are many kinds of desecration: of symbols (Hitler using inverted Swastika), of Holy Books and places of worship (Partition of India and Pakistan, 1984 anti-Sikh pogrom, sacrilege in Panjab 2015-2017), or words which are dishonoured  (a parent’s request, a lover’s vow and the like).

In my view the greatest desecration is when we do not honour the dead. That is because how we treat the dead displays our attitude to life.

In 441 BCE the Greek Sopholces wrote the play Antigone on precisely this theme.

Rebel Polynices dies in the Thebes civil war. King Creon orders his body will not be sanctified by holy rites and will lie unburied on the battlefield, prey for carrion animals and vultures. Polynices’ sister Antigone takes it upon herself to bury his body, grant it funeral honour.

In the 1990s, during my Masters, I read the play and had opportunity to participate in the staging of it. The experience came to bear on me when a quarter century after its militant guns fell silent, I went to look at Panjab.

I wanted to know if peace had returned. That is why my book PANJAB starts with the line: ‘If you want to understand Panjab, be ready to count its corpses.‘

One way of looking at Panjab today is as a graveyard full of carrion animals and vultures precisely because its dead have not been honoured.

Whether they were those innocent pilgrims who died in Operation Blue Star – mass cremations by the Army and civic authorities, many of those who died in militant violence, many militants whose numbers were claimed by police but bodies were never returned to families, thousands of innocents who went through enforced disappearances and were killed in extra-judicial killings. Their bodies cremated with no rights.

Or after the militancy period, during supposed peace, thousands of farmers and labour whose suicides were not acknowledged, who never came up on state rolls, whose families still suffer. I saw this desecration in the eyes of widows, of old mothers and fathers.

That is why I feel unless this desecration is not addressed, real peace can never come to the land. Such desecration has also happened in the North East, in Kashmir, in Bastar, recently in UP, in every place where rebels have not been acknowledged by the state.

Besides politicians and judiciary, the Army, the police, the civic authorities constitute the state.

When I asked many soldiers, policemen and women, government officers, what was their fascination for sarkari naukri, they said because the state provides a system to which we can belong. The state cares for them – whether through salaries, pensions, post retirement benefits, and also if they lay down their lives in the line of duty.

In fact, in most cases the allegiance is not to the state per se but to the warm network of which a recruit becomes a part, a sense of bonding, a sense of family.

This is precisely why when the PM said yesterday that China did not intrude into India’s borders, he did not tell us the location where the combat happened, and did not explain how our soldiers died brutally, he committed desecration. His hiding the truth is desecration.

He throws the brave soldiers out of the system of the state, the nation, their own network and sense of family. They are rendered expendables. They died, were not even martyred, for the cause of not the nation but to enable BJP win the Bihar elections, to save businesses which rely heavily on China for their survival.

This is how greed takes over morality. It spells doom.  After all, how we treat the dead displays our attitude to life and in this case nation.