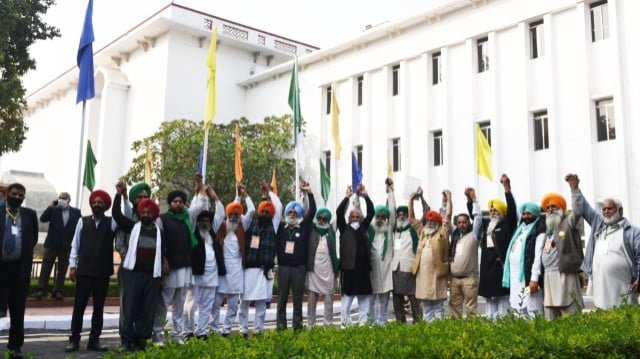 IN A MAJOR blow to the Modi government just a day before regime’s negotiations with the agitating farmer unions, the farmer affiliate body of the RSS has also declared its “principled and moral support” to the protests and said the officialdom around Prime Minister Narendra Modi was misleading him.

“We have spoken to the RSS chief (Mohan Bhagwat) on this issue…It is not necessary to agree with every decision of the government,” Bharti Kisan Sangh’s General Secretary Badri Narayan Chaudhary has said in an interview to Punjabi Tribune’s senior journalist Hamir Singh.

Earlier, the BKS leader had said the licence system has been liberalised too much for the traders under the APMC act and under the new laws, “anyone with a PAN card can become a trader and deal with farmers.” He had demanded that the law must have mechanisms to ensure that a farmer is paid when his produce is lifted, else the government must become the guarantor.

“In the present bill, the entire dispute redressal system is faulty. At present, the bill is bringing ease of business for corporates, but would complicate the lives of farmers further,” Badri Narayan Chaudhary.

In the interview with Hamir Singh, he said the BJP government did not take even the BKS into confidence before formulating the three controversial central farm laws, and strongly supported the demand for a separate law to extend statutory legal cover to MSP.

Interestingly, the BKS leader’s comments come at a time when Prime Minister Narendra Modi and his government are incessantly claiming that the three farm legislations hammered through by the central government were pro-farmer and will change the lot of the farming community for the better.

The BKS said it had conveyed it in writing to the Modi government and has established a channel of communication to ensure that the message reaches the power corridors in Delhi.

As Hamir Singh pointed out in his interview with the BKS leader in Punjabi Tribune, with this latest development, now there is not a single farmer organisation left, including those affiliated to the BJP, in favour of these new farm laws.

Punjab Today brings you these excerpts from Hamir Singh’s interview with the BKS general secretary:

Q – What is your perspective about the three new central farm laws?

A – Bharti Kisan Sangh had conveyed its reservations to the Central government at the very start. It conveyed its view again on September 22, 2020 when the laws were passed in Parliament. The farmers actually needed 22,000 more agri markets. This was mentioned in the central budget, too, but then things took a completely different turn and the process to shut down the markets began.

The argument that the farmers will be free to sell their produce in any market is meaningless because the farmer already had the right to do so. That the farmer will be assured of a just price has not been guaranteed anywhere. Be it be contract farming or other farming issues, the need of the hour is to set up an independent Agricultural Authority. There should be a mechanism to resolve most issues of farmers at the district level. A separate law is needed to extend statutory legal cover to MSP.

It makes no sense why private traders have been given the freedom to hoard, particularly when it comes to import, without any limit on stocks.

When your concerns were not addressed, were not even considered, why did you not opt for the agitational route?

We have our own ways of registering protest. We have 50,000 village committees spread across India. Of these, in 15-16 states, some 15,000 Gram Sabhas have passed resolutions and sent these to the central government. Our experience with the agitations hasn’t been great. In 2015, our unit in Madhya Pradesh had participated in the farmer movement that eventually turned violent and five farmers died. We are not in favour of such agitational methods.

But the current agitation has been peaceful?

Our complete moral and principle support is with the farmers’ movement. The government should open negotiations without any pre-conditions. The farmer organisations are not sending the right signals by talking about stretching the dharna protests over months. The small or marginal farmer cannot sustain that kind of protest. It gives an unsavoury impression that hordes other than farmers can then start replacing them at dharnas. Any long-drawn blockade of roads will start inconveniencing the people who may then turn away and this might lessen the desired impact of the dharna.

What do you have to say about adding certain conditions as a rider while asking farmers to join the negotiations while the prime minister and other ministers keep up with their stock statements about farm laws?

The bureaucracy is misleading the prime minister. Once someone’s mind is conditioned in a certain fashion, he starts to see things only through that limited perspective. We have an agriculture minister who has nothing to do with agriculture. Continuing to tom-tom the farm laws as panacea and simultaneously asking the farmers to talk to the government makes for a ridiculous situation.

Negotiations are meant to resolve any treacherous issue; if you want farmers to first give up their protest and then call them for negotiations, then who’ll listen to you?

Would you not like to be part of such negotiations?

We are not into the race for credit. We will be satisfied if the government’s talks with the farmers succeed. If there is any role that we might need to play, we will not be found wanting. But the government must show its seriousness.

Will you not be held accountable for going against the ruling party’s stance?

Who are they to question my locus standi; we are not slaves. We work in the interest of the farmers. We have spoken to the RSS chief on this issue. Everyone has said that we are fully within our right to speak up for those whose interest we represent. It is not necessary to agree with every decision of the government. The government did not consider it necessary to talk to us before formulating these laws.

It is becoming increasingly clear that the central government is no no mood to concede farmers’ demands. If the agitation becomes a long-drawn one, what could it possibly entail?

Any long-drawn agitation can result in a feeling of dejection that may give rise t even violence which is never good for the country. If the governments or rulers continue to be intransigent, then agitations are only meant to push them towards the right path. We’ll see what the future holds but the government should not lose the trust of the farmers.

PrevPreviousWhy are farmers protesting when govt says these laws are good for them?
NextStudent Migration from Punjab to Canada: Covid Aftermath Policy CorrectionNext
Author Related Post