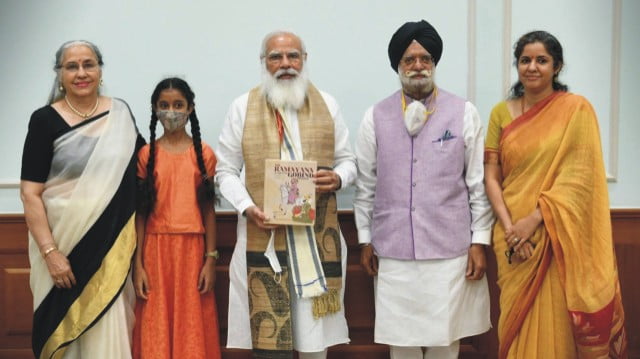 Presenting ‘Gobind Ramayana’ to Prime Minister Narendra Modi last week by former Rajya Sabha member KTS Tulsi clearly amounts to an attack on the Sikh principles since the authorship of Ramayana has been falsely and calculatedly attributed to tenth Guru Gobind Singh.

Sikh intellectuals associated with the Kendri Singh Sabha – a Central body said the Hindutva forces have mounted a cultural and hegemonic onslaught on the Sikh minority and as a part of that authorship earlier of Gita as “Gobind Gita” and now that of Ramayana has been attributed to the tenth Sikh Guru.

The statement further stated that it is known fact that the Guru had not authored any such mythical work. By ascribing such mythical writings to the Guru the Hindutva forces sought to demolish the unique and distinct religious identity of the Sikh religion, its philosophy and way of life.

Several references in Sikh Scripture are there which clearly maintain that ‘Lord Rama’ of Ramayana has no place in the Sikh theology. The Sikhism refers to the Rama that represents ‘One and Only One Omnipotent and Omnipresent Force’ of the Universe. Hence, attributing any mythical work to the Guru is a mischievous attempt to dilute the Sikh principles said the Sikh intellectuals in the statement.

Earlier, the Prime Minister referred to the ‘Gobind Ramayana’ while laying the foundation stone of the Ram Temple at Ayodhya.

Claim of Tulsi that the ‘Gobind Ramayana’ which he presented to Modi was translated by the former’s (Tulsi’s) late mother was bogus and a conspiratorial one.

Tulsi, a senior advocate has been defending the cases of Punjab police officers accused of killing the Sikh youths in fake encounters in the Supreme Court. And Congress sent him to Rajya Sabha (Upper House of Parliament) and his term expired last year.

Sikh intellectuals further said that unfortunately, in his efforts to search a political perch in the BJP, Tulsi went to the extent of distorting the Sikhism to placate the Hindutva forces.

Will Nitish Kumar be the best bet for opposition when challengers are many?....

Remission and Honouring of Gang Rape and Mass Murder Convicts; What next – Padma awards?....