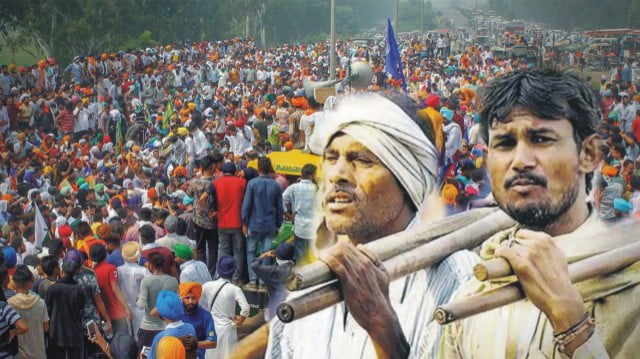 While agrarian Punjab protests against Farm Laws, these protests need to include the industrial labour as well.

FOR PUNJAB, a state which for decades has been demanding industry and whose small and medium scale industry has suffered immensely in the last two decades, the new Farm Laws are a death knell for agrarian economy and Labour Bills for industrial economy. That is why Punjab’s struggle is not just against the new laws but for its whole economy.

The Anandpur Sahib Resolution at the open session of the 18th All India Akali Conference held at Ludhiana on 28-29 October, 1978 under the Presidentship of Jathedar Jagdev Singh Talwandi, moved by Gurcharan Singh Tohra, President Shiromani Gurdwara Prabandhak Committee and endorsed by Prakash Singh Badal, then Chief Minister, Punjab, made the following points on labour. The resolution was then accepted by the Janta Dal and the CPI (M).

What follows are an edited version of the points.

The Shiromani Akali Dal economic programme is based on three basic principles.

• An economic and social structure which provides for the uplift of the poor and depressed sections of society.

• Unabated opposition to concentration of economic and political power in the hands of the capitalists.

The SAD calls upon the Central and the State Government to eradicate unemployment during the next ten years. While pursuing this aim special emphasis should be laid on ameliorating the lot of the weaker sections, Scheduled and depressed classes, workers, landless and poor farmers and urban poor. Minimum wages should be fixed for them all.

The SAD emphatically urges upon the Indian Government to bring a parity between the prices of the agricultural produce and that of the industrial raw materials so that the discrimination against such states which lack these materials may be removed.

The meeting of the SAD appeals to the Central and State Government to pay particular attention to the poor and labouring classes and demands that besides making suitable amendments in the Minimum Wages Act, suitable legal steps should be taken to improve the economic lot of the labouring class to enable it to lead a respectable life and play a useful role in the rapid industrialization of the country.

The 1978 Resolution had its precedent in the original 17th October, 1973 resolution at Anandpur Sahib. SAD Economic Policy and Programme as adopted by its Working Committee in 1973 has the following views on the Industrial Sector:

A planned effort to establish agro-industries in the rural areas should be made to relieve the growing population pressure in the urban areas. The industrial management should be democratized by enabling the workers to have a say in the management and by fair distribution of profits between the industrialists and the workers. The credit agencies, especially the nationalized banks, should be directed to invest a fixed ratio of their deposits in the rural areas. Every industrial unit beyond worth one crore assets should be brought under the public sector. The Akali Dal stands for progressive nationalization of Transport.

The SAD would try its best to work for the benefits of the workers, middle class employees and agricultural labour on these lines.

• To fix need based wages for industrial workers.

• To bring progressive improvement in the standard of living of government employees.

• To re-assess the minimum wages of agricultural labour and to standard of living for them.

• To take necessary steps to provide roofed accommodation for standard of living for them.

• To take necessary steps to provide roofed accommodation for the rural and urban poor.

—–
This was the vision. Now look at the developments in the last few decades.

The 1991 neo-liberal policies which opened up the public sector to invite private funding slowly eroded the state’s role in the development of the society. Private capitalisation, being focussed on profits, deprioritized the welfare of labour and people. It skewed the nation’s development by focussing on creating a burgeoning middle class at the cost of developing India’s villages.

Yet, Punjab being majorly agrarian, and with Centre’s role in not allowing big industry to develop in the state, was left in an eddy in the national current of neo-liberalization. The whole policy bypassed Punjab pre-occupied with its concern of being the granary of India.

Now, in Punjab we already have a situation where small and marginal farmers are unable to subsist on the shirking farm lands. They are pushed towards the industry. Yet, with new Labour Laws, what do they have in store for them in the cities?

As per a decade old data, because no concrete new data is available, so do account for huge number difference in the last 10 years, India has around 487 million workers. Of these over 94 percent work in unincorporated, unorganised enterprises ranging from pushcart vendors to home-based diamond and gem polishing operations. The organised sector includes workers employed by the government, state-owned enterprises and private sector enterprises. In 2008, the organised sector employed 27.5 million workers, of which 17.3 million worked for government or government owned entities.

Recently, three new labour laws were passed undemocratically in the Parliament. The Opposition was on boycott and the ruling party with one-third members in Rajya Sabha passed the Bills.

1. The Occupational Safety, Health and Working Conditions Code, 2020: brings together all laws relating to health and hazardous working conditions. It pins liability on the employer and the contractor and makes Public Distribution System benefits transferable for migrant workers. This places the onus of transferable PDS for migrant workers back on the government which is nowhere close to fulfilling this dire need of our society as was revealed in the lock-down period in the current pandemic.

2. The Industrial Relations Code Bill, 2020: redefines the terms ’employer’, ’employee’ and ‘worker’. It has also given a new definition for ‘strike’ by creating a regime where strikes are impossible and workers will no longer be free to organise or even participate in peaceful strikes. Workers will need to give a 14 days’ notice; once management agrees to talks strikes will no longer be valid and will convert into casual leave.

3. The Code on Social Security, 2020: brings together the provident fund (PF), the employees’ state insurance (ESI), maternity benefits, gratuity and other entitlements. This Bill has arbitrary categorisations that leave millions of working poor out. Only sites that have more than 10 workers will be covered by the law. ‘Personal residential construction work’ is excluded while it is the construction sector where a bulk of our unorganized workers find employment and need protection.

These new Bills tilt towards productivity, a capitalist industry need, and not toward labour welfare.

For instance, the safety provisions in the new Bills apply to workplaces that hire more than 250 employees. This means 90 per cent of labour is left out. The liability of the employer in case of death due to workplace accidents is paltry, at Re 100,000. This is in spite of the fact that the workplace in India is extremely dangerous and kills thousands of workers every year.

Similarly, small firms, which hire less than 300 workers, in total nearly 90 per cent of India’s workforce, have impunity in hiring and firing employees. The categories of self-employed, piece-rate workers and home-based workers are not covered under any social security mechanism.

Since Labour is on the Concurrent List of the Constitution, the Bills make it possible for states to tweak and change the laws according to their powerful lobbies of which Unions will no longer be part because the Bills mandate valid Unions will only be those with more than 75 per cent workers affiliated.

That is why, while agrarian Punjab protests against Farm Laws, these protests need to include the industrial labour as well. Most of this labour in Punjab is migrant workers. The same workers who bore the harshest brunt of the lock-down to contain the coronavirus outbreak. They remain a vulnerable section of society.

To make our voice heard, the agriculture and industrial labour, along with the small trader and arthiya must come together to protest the whole gamut of new laws being pushed by the government beholden to crony capitalists.