Be careful about your WhatsApp Status; but you can hail Major Gogoi 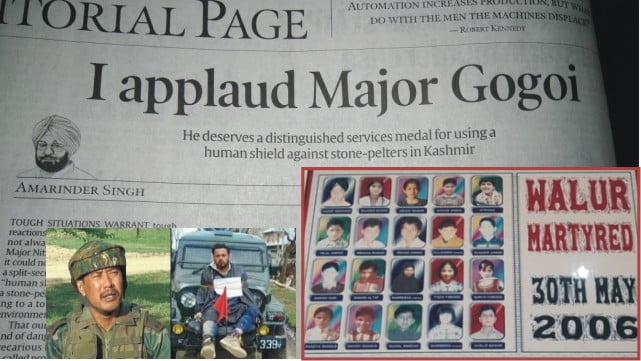 Perhaps you can put up a WhatsApp status: “I Applaud Major Gogoi”

SOME 75 students of a school in Kashmir went for an excursion, accompanied by teachers. A group of some 30 of them were in a boat that belonged to the Naval Marine Commandos (MARCOS), deployed at the Wullar Lake. At around 5 pm, tragedy struck, kids drowned, and soon the country was left shell shocked — 21 children and a female teacher had died.

This was the summer of 2006. Students were from the Burning Candle High School of Handwara town in Kupwara district, and the boat had capsized in the Wullar lake at Watlab, 75 km from Srinagar.

Ghulam Nabi Azad was the CM, Manmohan Singh was PM. UPA chairperson was Sonia Gandhi and Pranab Mukherjee was Defence Minister. Each one of them expressed sympathies.

Indian Navy’s Vice Admiral NK Verma, who was Chief of Personnel at the Naval Headquarters, flew to Srinagar and called on CM Azad to offer condolences. CM ordered a judicial inquiry, the Navy ordered its own statutory inquiry.

A week back, on May 30, 2021, a journalist in Bandipora’s town, Sajid Raina, put up his WhatsApp status as “The Wular Martyred” (The Martyrs of Wular Lake). He wrote: “The children share their graves here. Brothers have been buried together, somewhere three children are buried in the same grave. The tragedy is still fresh. #Boatcollapse.”

He just put up a WhatsApp status, recalling the tragedy, the death of 21 children and a female teacher, after 15 years.

The police called him and asked him why he had put up such a status. The poor fellow apologised and immediately removed his status. Now, the police has registered an FIR number 84/2021 against him for intent to cause riot and intent to cause fear or alarm to the public that could have induced people commit an offence against the state or harmed public tranquility (IPC Sec 153 and Sec 505). 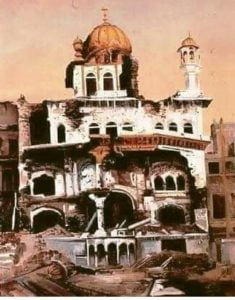 Today, June 6, 2021, is the anniversary of the massacre of thousands of innocent people by the armed forces of our country, ostensibly to save the unity and integrity of India and fight against the terrorists. 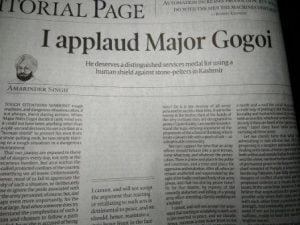 Please remember that CM Amarinder Singh is very sensitive about militancy in Kashmir and had written an article “I Applaud Major Gogoi”, and had said that the army officer who tied an innocent civilian to the bonnet of a jeep to use him as human shield “only did what was absolutely correct, and possibly the only sane and logical course of action.”

He had also asked that Indian forces be “freed of the “gentleman’s army” label they have been perforce carrying all these years.”

He is the only leader of any political party in the country who had demanded a distinguished services medal for the officer, other admirers of such raw courage had limited themselves to asking for a commendation certificate.

Clearly, some of our leaders are great ‘desh bhakats‘ and will cede no ground to anyone threatening the tranquillity of our country. So, please be very careful when you speak, write, or put up your WhatsApp status. Better still, you should claim that Punjab is number one state, that there is no shortage of vaccines, that our hospitals are best in the world, that we have surplus Oxygen, and that even Pakistan was ready to give us so much Oxygen that we would have supplied to all of India, if only Modi had allowed us.

Do we need to remind you what happened to Sajid Raina? Did you say “Sajid Raina who?” After all, he is no Major Gogoi for whom a CM will write an op-ed piece. But perhaps you can put up a WhatsApp status: The Martyred Children of Wular. You see, Sajid Raina cannot. You can. Or would you prefer “I Applaud Major Gogoi”?

Also Read: Why SELECTIVE SILENCE about citizen-led fact-finding missions has a role in discourse?