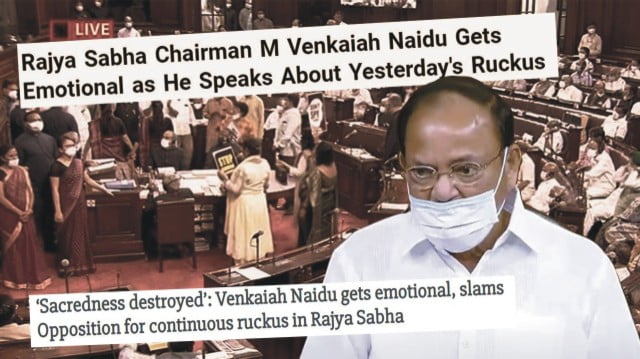 Why is Veep Venkaiah Naidu displaying his poor acting skills?

As a young reporter myself covering Parliament in early 90s, I was witness to the mayhem created by Naidu (present Veep) and other so-called Young Turks at that time – S S Ahluwalia and V Narayanaswamy – who made a mockery of Parliament. There was hardly a day when they did not kick up a ruckus and ensured that the parliamentary proceedings were disrupted.

But that’s not justifying how our representatives have been functioning in Parliament and elsewhere. Once they make fools of the voters, they get entitled for anything and even for what they had never been voted for in the first instance for the next five years.

The antics by the perpetual chief minister-in-waiting Partap Singh Bajwa undoubtedly touched a new low with his ‘performance’ in Lok Sabha, but that is only a part of the malaise that has taken over our parliamentary democracy.

We have actually witnessed worse – with speakers getting manhandled and benches and mikes getting uprooted for a physical show of strength.

Is this how the founding fathers of our country and the constitution dreamt up of the functioning of our democracy? Which way is the ordinary citizen of the country expected to look and what can he expect from the government?

The government did not yield an inch on the Pegasus issue when everyone is so disturbed about the misuse of power to spy on parliamentarians, ministers, judges, bureaucrats and media persons.

Surely the government must come out clean even if it doesn’t want to compromise on national security and does not want to admit that it was being done for the safety and security of the country.

It just need to answer why was anyone spying on the women who had charged the former Chief Justice of India Ranjan Gogoi? Not only her – her relatives too!

And why the journalists who anyway share the information they collect with their readers or viewers in any case.

The government has neither denied nor admitted that it had engaged the agency for spying. The government was not willing to discuss the issue in Parliament. The Prime Minister and the home minister never attended the session to face the queries.

So why is the government crying foul and why is Veep Venkaiah Naidu displaying his poor acting skills which have broken the hearts of so many news anchors?

We do expect some response from the powers that be ? Even if it is through the CBI or the ED or the IT regiments of the government.