Urdu poetry and the transitional era 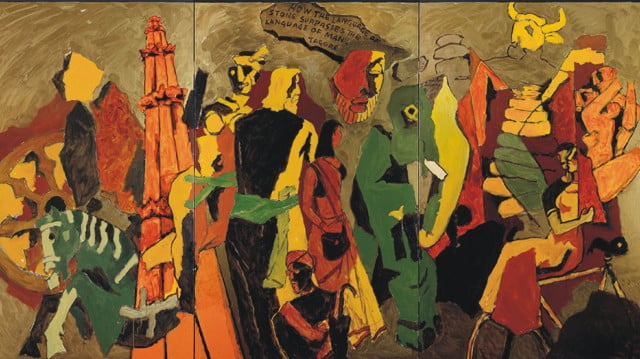 There are many verses in Urdu poetry which reflect the transitional period in our history.

India and Pakistan are both passing through a very turbulent and painful transitional period in our history –transition from a feudal to a modern society.

It is a period when there is tremendous turmoil and social churning, as the old society is being uprooted, but the new society has not yet been born, when old values are crumbling, but new values have not yet been established.

As Shakespeare said in Macbeth “Fair is foul and foul is fair“, i.e. what was regarded good earlier is regarded bad today, and vice versa.

There are many verses in Urdu poetry which reflect the transitional period in our history. Urdu shers (couplets) are a remarkable condensation of ideas which may take a volume to narrate.

Before dealing with them I may repeat what I wrote in my article ‘The true meaning of Faiz‘ poem – Gulon mein rang bharey‘:

” Urdu poetry is often written not directly, but in a round about way, by allusions, hints, indications and suggestions. It often has a superficial, literal, outer meaning, and an inner, deeper, real meaning, to understand which one has to wrack one’s brains.

Great Urdu poets like Ghalib believed that poetry should not be written in the language of the common man, and they had a horror of the commonplace in poetry. To make it dignified and sophisticated (andaaz-e-bayaan) they often used Persian expressions and metaphors”.

So I will have to explain these verses depicting the transitional era :

“Faith is holding me up, atheism is pulling me forward
Kaaba is behind me, the church is in front”

But here the words ‘Kaaba‘ (the holiest place for Muslims) and ‘Kaleesa‘ (i.e. church) must not be read literally.

As I have explained earlier, Urdu poetry often has a superficial, literal, outer meaning, and a deeper, real, inner meaning, which the poet is conveying by hints, allusions, suggestions, and metaphors.

Kaaba here denotes feudalism, and Kaleesa denotes modernism. So what Ghalib is trying to say is that we should give up feudalism and become modernised.

In a transitional era there is often a lot of bloodshed. For example, when Europe was passing through its transition from a feudal to a modern society (from the 17th to the 19th centuries) this period witnessed tremendous turmoil, wars, revolutions, chaotic conditions, etc.

2. Akbar Allahabadi (1846-1921) is regarded by many to be a reactionary poet. However, in the poem whose verses follow, he showed himself as surprisingly progressive, and brilliantly captured in verse the coming changes in society in this transitional age :

3. The sher which most powerfully captures the essence of the transition era was written by Firaq Gorakhpuri (1896-1982 ) :

In a marvel of condensation this sher (couplet) reflects the transitional age through which the Indian subcontinent is passing, from feudal society to a modern industrial society. At present we are neither totally feudal nor totally modern, but partly both.

“Every particle is in a condition of half night”.

Urdu poetry, as mentioned before, is often to be understood figuratively, not literally. So this line really means that (in the transitional age) everything is in flux, neither night nor day, neither the old order nor the new. Also, in the middle of the night if we get up we are dazed, in a state of mental confusion, and so are people in a transitional age.

In the second line, saaqi is the girl who fills the wine cup, but she is also the person to whom one can confide the innermost thoughts in one’s mind. The poet is imagining a girl, to whom he is describing the features of the transitional era.

From the point of view of people of the old, feudal order it is a sin to marry according to your choice, and particularly outside one’s caste or religion, it is a sin to give education to women, it is a sin to treat everyone as equal (as feudal Indian society was caste bound).

At the same time, from the point of view of modern minded people, the caste system is a sin, denying education to girls is a sin, and love marriage is quite acceptable.

Thus old and new ideas are clashing and battling with each other in the transitional age. Urdu poetry brilliantly expresses this state of affairs.

The above sher of Firaq is followed by this sher of his :

This expresses the overpowering desire of the poet for social change (‘tashnalabi‘ means thirst).

This transitional era is likely to continue in our subcontinent for another 15-20 years., after which a modern just social order will be created, in which everyone will get a decent life, i.e. employment, proper education and healthcare, nutritious food, housing, etc.

The Song of the Stormy Petrel

Why Congress Party suffering ‘Wisdom Paralysis’ in judging the crime of Navjot Sidhu?....

Gyanvapi Mosque: Digging up the past to ruin the future....