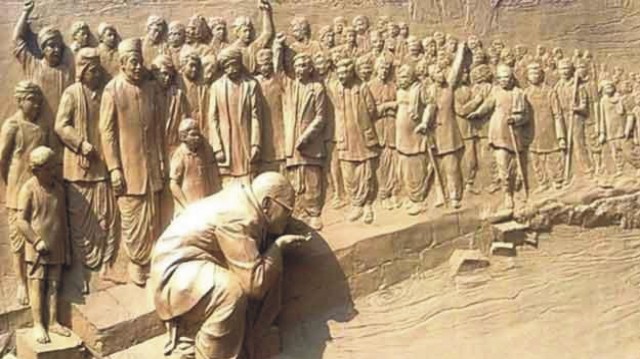 The eradication of untouchability, the struggle for getting right of access to public drinking water run parallel and have gone through various phases.

Indra Meghwal a nine year old student of Sarswati Vidya Mandir, Jalore in Rajasthan was beaten by his teacher on 20th July 2022. The crime of this boy, was that he drank from the water pot reserved for his upper caste teacher. This is the version of Indra’s parents and classmates.

Another version is being floated that the boy was beaten as he had a tiff with another schoolmate. The truth seems to closer to what the deceased’s parents and other school children say. 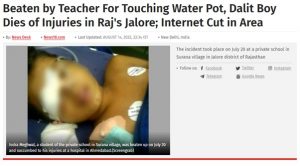 The eradication of untouchability, the struggle for getting right of access to public drinking water run parallel and have gone through various phases.

The teachings and travails of Mahatma Jotirao Phule revolved around facilitating the education for dalits, something forbidden by Hindu Holy Scriptures.

BR Ambedkar stood tall among all the social reformers who strove for social justice.

On August 4, 1923 The Bombay Legislative Council opened the state funded schools, watering sources, dharmashalas, Courts and dispensaries to the untouchables. It was a historic decision.

Following on this on March 19, 1927 Ambedkar, visionary for social justice, marched to Mahad Chavdar Talab (tank) to drink water. His group was thoroughly beaten up and tank was purified.

Ambedkar’s movement caught on and the untouchables became aware of their plight. A bit later in 1930 he tried entry to Kalaram Temple in Nashik, again to face strong opposition from upper caste. By this time Hindu Mahasabha was there and RSS was also formed in 1925.

None of these organizations came to support or follow up on Ambedkars’ travails for social equality. It was Gandhi who took up the cause of untouchability eradication from 1933.

The RSS’s second Sarsanghchalak Golwalkar in due course went on to uphold the Varna caste in his book, “We or Our Nationhood Defined”.

Same was the case with Deendayal Upadhyay, another major ideologue of Hindutva nationalism. His Integral Humanism also argues of Caste hierarchies.

Surely the struggle for eradication of untouchability began from Ambedkar onwards but its pace has been painfully slow as seen in the Jalore tragedy.

The atrocities against Dalits show a mirror of our society and despite decades of efforts they continue. Despite the stringent laws; practices humiliating the Dalits are persisting. The provisions of anti Dalit atrocities are very apt, but they seem to be more on paper.

The data compiled by Ashok Bharati for the National Confederation of Dalit and Adivasi Organisations, based on figures from the annual reports of the NCRB from 1991 to 2020, show that there were more than 7 lakh atrocities on Dalits.

There were 38,000 rapes of Dalit women, in the last two decades. More than five atrocities per hour have taken place against Dalits in the last five years. It is, therefore, timely to ask if law enforcement is working as it should.

Another aspect which seems to have gone unnoticed is the emphasis on ‘our culture’ which is the hallmark of right wing politics. Culture surely is the most precious aspect of human society. But what aspect of culture we pick up is important.

We had the likes of Buddha and Kabir who talked of equality in a substantive way. In contrast to this, the one’s running Saraswati Vidya Mandi impose and present the culture which is that of elite-upper caste.

The one’s practices in these schools are the values against which Bhakti Saints and other social reformers like Jotirao and Ambedkar talked. 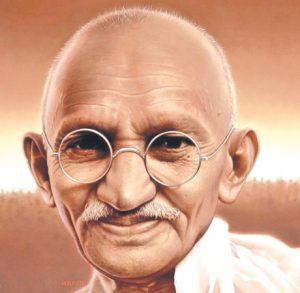 Multiple aspects of Jalore tragedy are being highlighted but what is ignored is that the incident took place in a Sarswati Vidya Mandir, part of a large chain of schools having good share in schooling system.

These large chains claim that their focus is on Shiksha (education) and Sanskar. This word Sanskar is difficult to translate. Roughly is means ordination. In Indian context it is another name for instilling Brahmanical norms.

Sarswati Vidya Mandir chain of schools is run by Vidya Bharati from 1952.

During Janata Party Government when Bharatiya Jan Sangh, the previous Avatar of BJP, was part of this party and leaders like Vajpayee and Advani were in the ministry and Vidya Bharati became a formal organization (1977-1978). And its version of norms started being instilled in young children.

Today these schools are major players in the education system, silently working to uphold the values from the ‘Golden Past’, the values of caste and gender hierarchy. These schools account for 2% of schools in India and must be the largest NGO in education sector.

The present situation is mired by contradictory social trends. On one side there is a great lip service to Ambedkar’s thoughts and values on the other the chains like Vidya Bharati run schools are focusing on Sanskars, which have deep roots in the values which led to Varna, Jati and untouchablity. One does not know whether the Jalore tragedy is one off case in such schools or there is a pattern behind it.

The teacher who beat the child must be there to promote the samskars of the Holy Scriptures and upheld by the major ideologues like Golwalkar and Deendayal Upadhyay. One understands that now they have started Seva (Service), to woo low caste communities in their fold of Hindutva politics. They have also been won to quite some extent in these areas, but incidents like Jalore are a reminder to the deep rot in such institutions.

There is a need for introspecting as to why this incident took place and to modify the schooling pattern whereby these horrid norms do not prevail to torment those who have suffered these ignominies from centuries.