Opposition Unity In India Is A Mirage 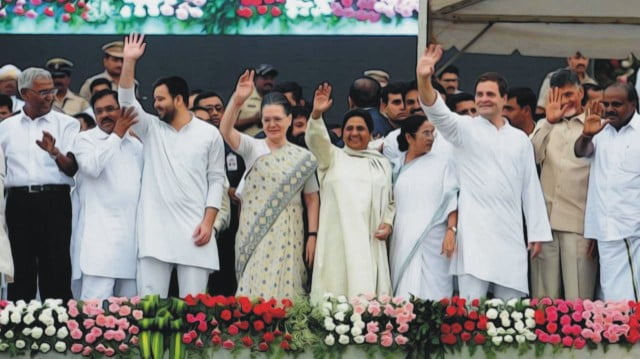 Even if an opposition unity is formed, it will just be a a multi headed hydra

Earlier, a meeting had been held for this purpose in Sharad Pawar’s residence, attended by several Opposition parties (but not Congress), though it was claimed to be non political.

The test of every political activity and political system is one, and only one: does it raise the standard of living of the people? Does it give them better lives?

Assuming such an opposition unity is forged, what will be its agenda (apart from ousting BJP from power in the 2024 parliamentary elections)?

Have these parties any idea how to resolve the basic problems of the Indian people–massive poverty, record and rising unemployment, appalling level of child malnourishment (almost 50% according to Global Hunger Index) and women’s anaemia (almost 50%), almost total lack of proper healthcare and good education for the masses, widespread farmers distress (between 3.5 and 4 lac farmers have committed suicide in the last 25 years), widespread corruption, skyrocketing prices of foodstuffs and fuel, etc?

I am no supporter of the BJP, but would like to ask the Opposition parties this question. Do they have any programme for solving these problems, or is it just a lust for power and pelf ?

The experience of the Janta Party (which was an alliance of opposition parties) formed after the Emergency in 1977 was not a happy one. The constituents of the Janta party kept fighting each other, until it collapsed at the end of 1979.

Even if such an Opposition unity is forged, and even if it comes to power in the Centre in 2024, will there not be a mad scramble for lucrative portfolios like finance, industry, commerce and home, as was witnessed in Karnataka after the 2018 state assembly results when there was a fierce tussle between the Congress and the JD(S) over this issue which delayed formation of a government.

And will they not be fighting each other even thereafter? After all, these parties are not here to do ‘samaj seva’.

I fear that even if an opposition unity is formed, it will just be a collection of ‘saanp, bichchu and gojars‘, a multi headed hydra, with nothing in common, which will not be of any good to the Indian masses in their lives, and cannot last long.

Congress in a self destructive mode