Indo-UK Ties On A New Track? 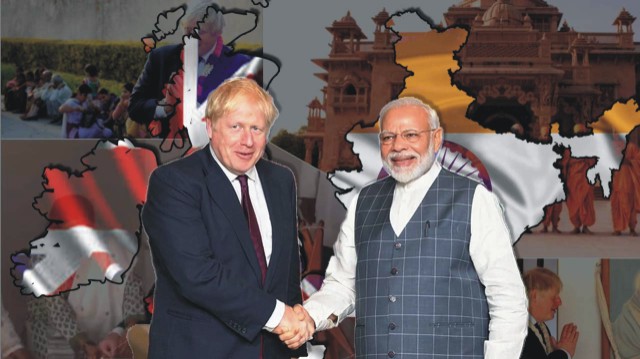 The overall lacklustre visit to India by the British Prime Minister to India, underlines the fact that the UK can’t take India for granted, and has to treat it as a bigger partner.

In Persian there is an old proverb: ‘Amad`an, nashist`am, ghuft`am, barkhas`tam’, meaning they came, they sat, they talked and then dispersed. It actually means to say that nothing substantial was achieved by the visit or the talks. The same could be said about the recent visit by the British PM Boris Johnson to India, after his two previous visits scheduled last year, were cancelled due to Covid pandemic.

The diplomacy nowadays, thrives on optics. On this count the BoJo visit clicked all the boxes, but was also marred by angry reactions on the social media on photos showing him in the driver’s seat at a JCB bulldozer. Perhaps his advisers were unable to connect the continuing controversy over bulldozers being used by the establishment against the minorities across India, or his close connections with the owner of the JCB, Lord Anthony Bamford, an old Conservative party donor and supporter, overweighed the local sensibilities.

The Gujarat leg of his visit, a carbon copy of his Home Secretary Priti Patel’s 2015 visit to the state, was in essence aimed at garnering the support of the Gujarati electorate back home, keeping an eye on his uncertain political future.

In Gujarat he also met with Gautam Adani at his company’s head quarters. BoJo described the feeling of being in Ahmedabad similar to as those of Sachin Tendulkar and Amitabh Bachchan, two Indian icons used for boosting his own public image and trying to resonate or connect with the Indian audiences.

In New Delhi, he referred to Prime Minister Modi as a ‘khaas dost’ and continuously as Narendra during his speech at Hyderabad House. But no more ‘khaas’ treatment to the Indian demands of a relaxed Visa regime and post study work for the Indian students, an indication towards which was given in Ahmedabad, but not granted finally.

His main focus remained the FTA between the two countries, as he expected to take back home something substantial in economic terms, particularly after his failed Brexit strategy. He urged the negotiators on both sides to hasten the pace of negotiations so as to have a final document ready for signing by Diwali in October. Certainly an over ambitious demand for an agreement, which has been under negotiations for more than last ten years.

Though the Indian side stated that it would demonstrate the same speed and urgency that it did in concluding recent FTAs with the UAE and Australia in recent months, yet nothing can’t be said for sure about an Indo-UK FTA, as there are many thorny issues on both sides.

In addition, though not expressed overtly by the British side and neither by BoJo, the Russia-Ukraine war had an ominous shadow over the visit. 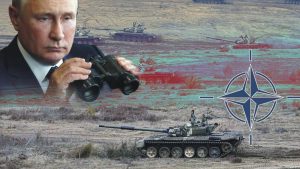 Though his foreign secretary was very firmly told by New Delhi just 22 days before his visit that India is not going to change stand on its ties with Russia, BoJo thought he might be able to convince New Delhi to do so.

However, predicting the Indian response he had set the tone for this when even before meeting the PM Modi he had said that he understands India’s historic ties with Russia, but still chose to lecture New Delhi on its relationship with ‘autocratic’ states, though this time also New Delhi politely stood its ground.

Though the UK side is referring to a host of agreements signed in different sectors, and BoJo’s statements on counter-terrorism task force being constituted and against the Indian economic fugitives currently at home in the UK, everyone is certain that they are just mere words, nothing substantial. His announcement of One billion pounds trade deals and creating 11,000 jobs is just peanuts for India. 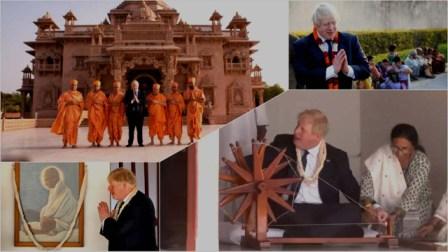 Both sides also agreed to deepen bilateral defence and security cooperation. India welcomed UK’s Indo-Pacific tilt and joining the Indo-Pacific Economic Initiative; on its part Britain announced the decision to ease the transfer of defence equipment and technology for India and also for developing an advanced jet fighter. But overall, nothing concrete was inked down by both the sides and the technology transfer could be viewed as just a gimmick to wean India away from Russia.

Overall, the two sides showed commitment to joint research, development and production of advanced weapons and related technologies. The two PMs also issued a statement on strengthening partnership in cyber-security domain, and plans to boost cooperation on mitigating climate change and promoting clean energy. But these agreements should be seen as just part of a normal bureaucratic visit.

The visit seems to be a hastily stitched plan, with no long-term goals and no narrative setting, and was unable to achieve anything bilaterally. In the end BoJo was unable to get anything substantial from India and his political troubles back home persists.

The coming days will show how he’ll be able to deal with them and survive as even his closest Asian origin lieutenants like Rishi Sunak and Priti Pate, who were predicted to take over from him, are facing politically damaging controversies of their own.