A New Beginning for Turkiye-Israel Relations 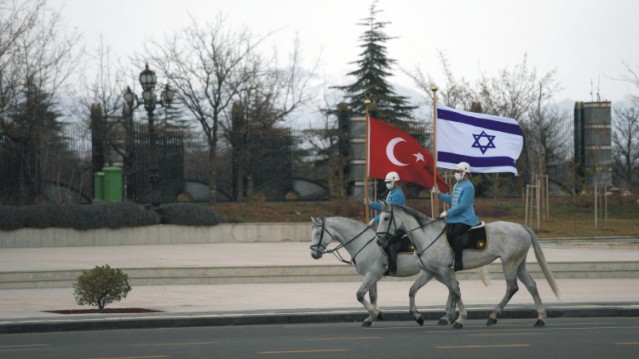 The reset of diplomatic ties between Turkiye and Israel may result in some new paradigm shifts at the regional level besides helping both to focus more on bilateral economic gains.

Recently there have been indications both from Israel and Turkiye that the leadership in those countries was mulling a reset in their bilateral ties. In Israel’s case it was one more step in the direction of regional rapprochement, while for Turkiye it is basically aimed at tackling and furthering its economic woes and regional interests.

The announcement by the two countries on 17 August that they’ll exchange ambassadors and normalise bilateral diplomatic relations, follows re-tuning of Turkish diplomatic ties with Saudi Arabia and the United Arab Emirates (UAE).

The relations between the two countries soured in 2018 when Turkiye expelled the Israeli ambassador from Ankara, after the killing of 60 Palestinians in Gaza during protests against the Trump administration’s decision to relocate the U.S. embassy from Tel Aviv to Jerusalem. In fact, the Turkish support to the Palestinian groups, particularly the Hamas and its objection to the Israeli annexation of territories in and around the Gaza Strip has been the bone of contention between the two.

The thaw in ties comes after more than 10 years of tensions. A visit to Turkey by Israeli President Isaac Herzog in March, followed by visits of two countries’ foreign ministers, helped warm relations.

President Recep Tayyip Erdogan seems to have realised the futility of Turkiye’s hostile policies and stand against Egypt, Israel, Saudi Arabia and the UAE. This stance has made Turkiye isolated in the region besides being economically unviable for it.

One of the basic reasons for Turkiye’s animosity against other so-called Islamic countries is the contest for claiming the title of the Leader of the Islamic World. This has resulted in Turkiye blaming the successive Egyptian, Saudi Arabian and UAE governments as the main source of adopting postures against its claim to the Islamic world’s leadership and making it a pariah state in the region.

Historically it was Turkiye, which maintained the Two Holiest Shrines of the Muslim world in Saudi Arabia, before oil was discovered in the Kingdom, which changed its fortunes forever. This newfound wealth led Saudi monarchs to lay claim to being the leader of the Islamic world.

Obviously Turkiye tried to resist this change but the fall of the Ottoman empire led it to modify its stand on several issues related to the Muslim Ummah.

In addition Turkiye blamed these governments and their policies as responsible for heightening the regional stability for their own selfish interests. In return these states blamed Turkiye for adopting such postures and policies, which led to friction in the region and amongst so called Islamic states.

As retaliation these countries have bettered relations with both Cyprus and Greece – Turkey’s arch foes in the Mediterranean. While at the same time Turkiye has improved ties with Qatar – a country which was made an outcast in the Gulf region in 2017 when UAE, Saudi Arabia, Egypt and Bahrain imposed an economic blockade against it.

In addition before facing the electorate next year, Erdogan has shaken hands with Israel in the hope that it may change Turkiye’s economic condition with increased economic exchange with Israel, translating into improved economic climate for Turkish citizens.

Recently, Israel has sought to reset its ties with regional countries both Arab and non-Arab. It considers Turkiye to be an important factor both regionally and in Gaza also, as Hamas has opened up an office in Istanbul and for the last 10 years it has been operating from Turkiye, in addition Israeli authorities feel that closer ties with Turkiye will allow it to efficiently conduct intelligence monitoring of Iran.

In addition, Israel feels that if it wants to sell its natural gas to Europe, which was found near its coast in 2010, then the most economically viable route will be through Turkiye. It could be a win-win situation for both if they are able to thrash out any future plan for cutting off Russian gas supply to Europe, both diplomatically and financially in the long run.

During the hostile period with Turkiye, Israel had come closer to both, Cyprus and Greece. This resulted in increased economic, security and people to people contacts between them. Both countries enjoyed influx of Israeli tourists, who abandoned the Turkiye’s coasts. Israel also initiated military cooperation with them and has also been training Greek and Cypriot military forces.

Now Israel will have to balance the geo-strategic and potential economic benefits of cooperation with Turkey with Jerusalem’s well-developed ties with Athens and Nicosia.

Israeli President Isaac Herzog, who played a key role in the Israel-Turkey rapprochement, has given assurances to both Cyprus and Greece that Israel’s new found friendship with Turkiye will have no bearing on its existing relationship with Cyprus and Greece.

All in all, one can presume that the present situation points to a scenario where diplomatic, political and security ties may remain cold, as the real target for both the countries is to give a boost to their economic ties. Israel is also aware that Turkiye may continue to play the Palestinian card to placate its internal audience.

Over all this odd marriage of convenience might be able to counter other regional alliances and axis’s of power, and both would try to maximise their returns either independently or bilaterally, based on the given situation.