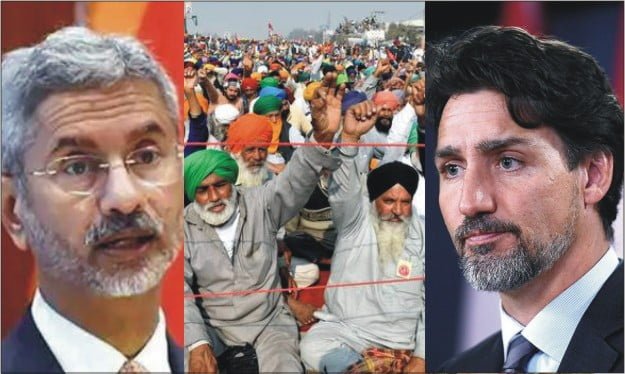 THE CANADIAN Prime Minister Justin Trudeau expressed his concern over the Indian farmers agitation, and said that Canada will always support the democratic right of people to hold peaceful protests.

The Indian government has strongly objected to these statements, and the Canadian High Commissioner to India was summoned by the Indian External Affairs Ministry and told that such remarks would damage Indo-Canadian ties.

Tonight at an online event commemorating Sri Guru Nanak Dev Ji’s Gurpurab, @JustinTrudeau expressed concerns about the right to peaceful protest and the #ChaloDelhi campaign in India. He confirmed that Canada has raised the issue with Indian authorities. pic.twitter.com/hf038m14Te

The Indian Foreign Affairs Minister Jaishankar has decided to skip the Canada led meeting of Foreign Ministers to discuss the COVID pandemic on 7th December.

I submit that the stand of the Indian Govt is misplaced, and it is much ado about nothing.

This principle states that each state is sovereign, and no other state has a right to interfere in its domestic and internal matters.

The Westphalian sovereignty principle was incorporated in the UN Charter in Chapter 1 Article 2(4) which states :

“All Members shall refrain in their international relations from the threat or use of force against the territorial integrity or political independence of any state, or in any other manner inconsistent with the Purposes of the United Nations”.

So if a foreign power invaded India, or gave threat of invasion, or sent troops, arms etc to rebels in India, it would certainly be violation of Westphalian sovereignty. But how does a mere statement violate it?

In fact the principle of Westphalian sovereignty was challenged by several international jurists after the Second World War, when the horrors of Nazi atrocities were revealed to the world.

Should states have remained silent when Jews were being persecuted by the Nazis in Germany ( and later in countries they occupied ), merely because the Germans claimed this was their internal affair?

So now many jurists assert that the Westphalian sovereignty principle is subject to humanitarian considerations, and cannot be regarded as an absolute principle.

Some time back I, along with a Delhi law student Aiman Hashmi, had written an article titled ‘Right to investigate in international law‘.

In this article the Westphalian principle was examined in some detail, and it was submitted that though a foreign country or body has no right to invade India, it has a right to investigate allegations of violation of human rights.

I submit that the mere expression of concern by a foreign leader, and his supporting the right of people to peacefully protest, in no manner violates the principle of Westphalian sovereignty.

In today’s era of globalisation, internal affairs in one country can certainly be commented upon by foreigners. The stand of the Indian Govt on Justin Trudeau’s statement is therefore puerile.