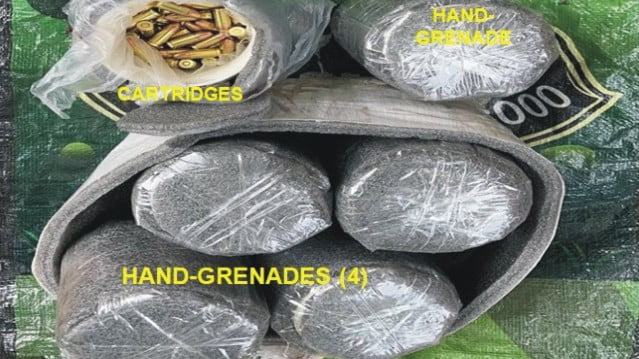 NSG team has confirmed the presence of 2-3 Kg of RDX in the Tiffin Box.

A high alert has been sounded in Punjab following the recovery of a Tiffin Box fabricated into an Improvised Explosive Device (IED) or Tiffin Bomb along with five hand grenades and 100 rounds of 9mm pistol recovered from village Daleke, Lopoke in Amritsar.

Director General of Police (DGP) Punjab Dinkar Gupta, while addressing a press conference here on Monday, said that following the inputs regarding drone activity in the area of villages including Daleke, Bacchiwind and Shohra, a massive combing operation led by SSP Amritsar Rural Gulneet Singh was launched around villages during the intervening night of Saturday and Sunday.

He said that, during the search operation, the police team recovered a bag carrying a double-decker Children’s Lunch Box bearing ‘Minions’ Cartoon picture and other ammunition packed very meticulously in soft foam pouches.

He said preliminary investigations indicated that the bag was dropped through a Drone, which crossed the brother into India.

The DGP said that the police teams had secured the bag and a team of National Security Guards (NSG) team had been called on the spot, which had confirmed the presence of 2-3 Kg of RDX in the Tiffin Box, which had been fabricated into a bomb. 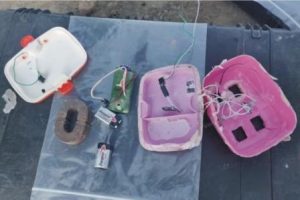 “The RDX was installed in the Tiffin Box in such a sophisticated manner that it has three different mechanisms including Switch, Magnetic and Spring for operational flexibility,” said DGP Dinkar Gupta, adding that further investigations were on.

The DGP said that the high alert has been sounded across the state. He cautioned the people of Punjab to remain alert all the time, and immediately report to the police if they find any suspicious thing lying abandoned or unclaimed anywhere, including in trains, buses or restaurants etc. “People can inform the Police on 112 or 181 helpline numbers,” he added.

Meanwhile, an FIR no. 208 dated August 8, 2021 has been registered under sections 25/27/54/59 of Arms Act, sections 3/4/5 of the Explosive Substances Act at Lopoke Police Station Amritsar in this connection.