The Sole Question: A Question of Your Soul 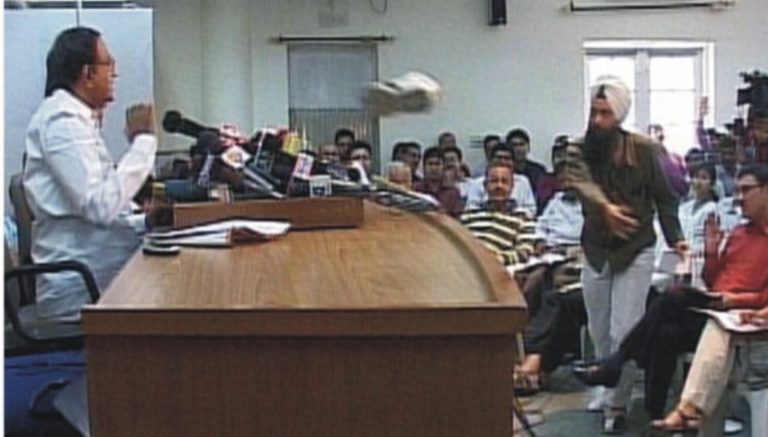 PUNJAB TODAY brings you this old article from its 2009 archives. This was written in the very same week when Jarnail Singh hit Indian media headlines and prime time television with his shoe-throwing act. Jarnail Singh passed away on May 14, 2021, battling with Covid.  — Editor

To the “sharam-ki-baat-hai” journo, the point is simpler. Bilkul sharam ki baat hai.

“BUT  what kind of defence is this? If I have a feeling that I have not got justice, or if I feel that you are not seeing my point of view, should I throw my shoe at you?” The Aaj Tak TV anchor was seething with anger when a mid-level leader of the Akali Dal in Delhi tried to half-justify the shoe throwing by Jarnail Singh.

To the TV anchor, our point is simple. If his sister had been raped, his father and brother had been killed, his son had gone half mad and his mother had been sitting on dharnas for 25 years only to see that those who did all this to her were now planning to sit in Parliament and make laws for her, it would be okay with us if the anchor threw a shoe.

It took 25 long years, a clean chit to the killers and a Lok Sabha ticket for that shoe to come hurling, Mr Anchor. Whatever happened to the simple “who, when, why, how, where” of journalism?

To the “sharam-ki-baat-hai” journo, the point is simpler. Bilkul sharam ki baat hai. The media’s 25 year long patient wait is a matter of shame. What is he waiting for? Another shoe? At times, dying of shame is a courageous act. Try it. Only the good people die of shame.

There will be no end to those now panning Jarnail Singh, the newspaper where he worked included. It is the best weapon to prevent what could create further problems. If Jarnail Singh’s shoe flinging triggers a real search for answers and some soul searching, it will be a troublesome journey. 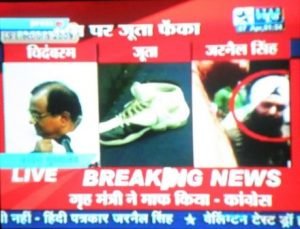 So naturally, the best way is to take the moral high ground: “How nice of Mr Chidambaram to have pardoned Jarnail Singh!” Really. How nice of him and all his colleagues in the Congress to look forward to sharing the hallowed precincts of Parliament with the Tytlers and the Sajjan Kumars!

How nice it must have been to make Tytler a minister in Manmohan Singh cabinet! How nice of the Congressmen not to ever broach the subject of who killed the hundreds of Sikhs in 1984!

It is time the fight takes a new turn. Jarnail Singh’s act should now trigger a new way forward. Seemingly, it is the responsibility of Sikhs only to ensure that killers of innocent citizens be punished. Good men and women who live in Delhi are sharing the city with a large number of people who killed the Sikhs. If they feel it is fine with them, so be it.
Is this the kind of India that the country’s Hindus, Muslims, Christians want? Then why hark to the Sikhs only?

People who led killer mobs should not sit in Parliament. Simple.

Will Civil Society be called ‘civil’ only if it limits itself to speak in seminars and workshops?

It is time to understand how soft Hindutva is neither a Congress monopoly nor harder variety a BJP patented plan. Brahamanical forces move together, in tandem. The crooks are very well networked. All the Tytlers and all the Babu Bajrangis are real friends.

It is time the good networked, too. So stand up to applaud a man who threw a shoe. He did it on our behalf. At times, nothing less works for your soul than a sole. Deftly aimed.