Hindu-Muslim unity will be the real tribute to Sir Syed 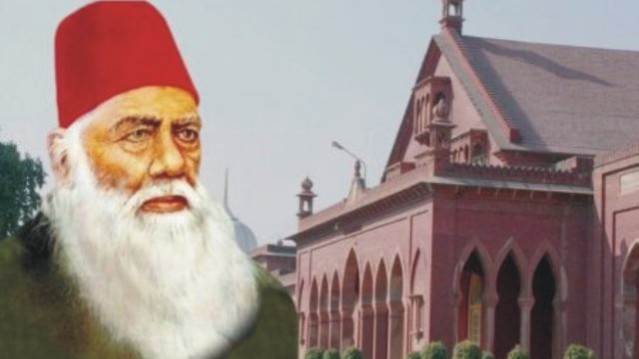 Sir Syed had rightly said, “The first requisite for the progress of a nation is the brotherhood and unity amongst sections of the society.”

On 17 October, as usual, students, teachers and alumni of Aligarh Muslim University in the entire world will organize Sir Syed Day with great pomp and show. In 2017, AMU celebrated 200th birth anniversary of Sir Syed Ahmad Khan, founder of the University. Indeed, it was a historic moment and the euphoria is still fresh in the mind and will be reminded again on the Founder’s Day.

I personally believe that on this great occasion, along with worldwide celebrations it should be also an occasion of reflection and introspection as to how far the dream of the founder has been fulfilled? What else is required to be done and what are the challenges ahead?

Every Sir Syed day, in my opinion, AMU should reflect on what was initially planned, what has been accomplished, how far the founding father’s ideas, ethics, and dreams have been upheld, what still has to be done, and what the problems are. Opportunities and difficulties are plenty, but if they are met with the appropriate attitude, full commitment, and performance of tasks and obligations, there is never a problem without a solution. AMU is a resource for the community and the nation as a whole. It is important to realise this in order to multiply this resource from generation to generation and grow its worth significantly.

The message Sir Syed tried to convey in one of his speeches was the foundation of his belief, expectation and aspiration. He said: “From the seed which we sow today, there may spring up a mighty tree, whose branches, like those of the banyan of the soil, shall in their turn strike firm roots into the earth, and themselves send forth new and vigorous saplings.”

Undoubtedly, the seed sown has developed into a lovely tree that is dispersing its fruits over the globe. AMU must now consolidate in order to position itself as a national role model. The vision of Sir Syed was to give the local community more educational, social, political, and economic freedom since only then could they participate equally in the process of growth and make a meaningful contribution to the development of the community and the nation.

The opening of AMU branches across the nation creates new doors for opportunities. Former Vice Chancellor Lt. Gen (Rtd) Zameer Uddin Shah’s decision to establish English-medium Intermediate Colleges in each district of Uttar Pradesh was hailed as a step toward realising the true spirit of the Aligarh Movement because AMU is a movement that aims to emancipate the community from its ignorance, enlighten it to become a responsible community, and empower it to contribute to nation building.

I spoke with Lt. Gen (Rtd) Zameer Uddin Shah, former AMU Vice Chancellor, Frank Islam, Chairman and CEO of FI Investment Group, LLC based in the USA, and Prof. Faizan Mustafa, former Vice Chancellor of NALSAR Law University Hyderabad, to find out the available grounds on which sincere efforts are to be made and the guidelines to consolidate upon. I asked them what they believed should be the true tribute to Sir Syed Ahmad Khan?

The responses are: Lt. Gen Zameer Uddin Shah (Retd) said, “The real tribute to Sir Syed Ahmad Khan is spread of modern scientific education, especially among the Millat. Our efforts must be towards establishment of quality schools with moderate fees, which impoverished families can pay. Our efforts have been to foster close and warm relations with our Hindu brethren. Even if our efforts do not succeed, at least we can avoid deterioration in ties. We must remain true to our salt.

Noted AMU alumnus, Frank Islam said, “The real tribute to Sir Syed should not be confined to a single day but the testimony that all those who have graduated from AMU, the institution that he founded, give every day by the way in which we live our lives. We are the proof that his vision of modernising Islam and making educated Muslims leaders not only in India and Southeast Asia but around the world was a vision not just for the 19th, 20th21st century, but forever.”

Islam added, “Those who have been educated at AMU and through other educational initiatives spawned by Sir Syed have been given the gift of a sensitive and sensible education. We have been enriched, enabled and empowered. Our responsibility is to return that gift and to assist others in securing the benefits of education similar to that which we have received. Actions and deeds speak louder than words. They are the ultimate and real tribute to Sir Syed.”

Another noted alumnus, Professor Faizan Mustafa said, true tribute to Sir Syed would be to work for the improvement of Hindu-Muslim relations in the country as these days we are having an environment of intolerance. Sir Syed’s ideology had striking similarities with modern day theory of multiculturalism, which means rejection of melting pot and acceptance of salad bowl theory where integration rather than assimilation is the preferred choice.”

Prof Mustafa said, “Sir Syed genuinely said in a lecture at Patna in 1883: “My friends! This India of ours is populated by two famous communities, the Hindus and the Muslims. These two communities stand in the same relation to India in which the head and the heart stand in relation to the human body.” In Gurdaspur in 1884, he remarked: “O Hindus and Muslims! Do you belong to a country other than India? Do not you live on this soil and are not buried under it or cremated on its ghats? If you live and die on this land, then, bear in mind, that… all the Hindus, Muslims and Christians who live in this country are one nation.”

“Sir Syed was indeed a great nationalist. Expressing his opinion on the issue of Hindu-Muslim relations, he said that by living so long in India, the blood of both has changed. The colour of both has become similar. The faces of both, having changed, have become similar. The Muslims have acquired hundreds of customs from the Hindus and the Hindus have also learned hundreds of things from the Muslims. We mixed with each other so much that we produced a new language – Urdu, which was neither our language nor theirs. Better Hindu- Muslim relations would be the real tribute to Sir Syed,” said Mustafa.

I wish the theme of this Sir Syed Day to be “peace and communal harmony” and on this day, AMU fraternity should pledge afresh to restore communal harmony and strive for a peaceful India where there is love and respect for one another in order to establish a tolerant society. This could be the true realisation of the real tribute to the founding father. Sir Syed had rightly said, “The first requisite for the progress of a nation is the brotherhood and unity amongst sections of the society.” Let us make India a land of peace.