The Summit for Democracy 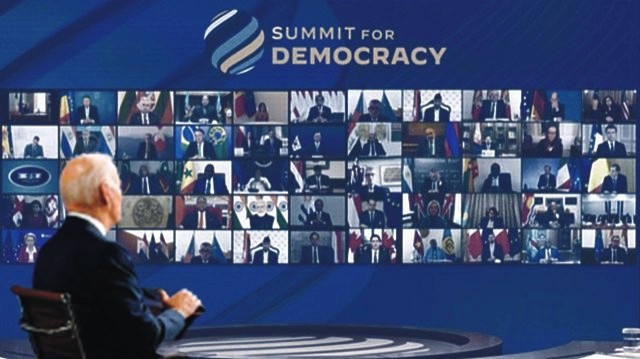 The summit hosted by the US president, instead of bringing together democratic voices at a common international platform, gave birth to many controversies.

A US sponsored two-day virtual democracy summit wrapped up last week. It was promised by President Joe Biden during his election campaign last year, as he wanted to show that the US has departed from the “America First’ philosophy of Donald Trump and instead will focus on an event that was more about starting a global conversation about how best to halt backsliding than producing immediate results or expanding democracy’s reach. 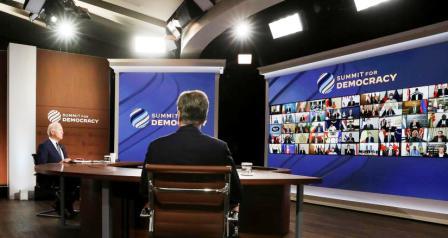 Biden and fellow leaders announced initiatives to stem autocracies from misusing big tech to stifle dissent, enhance election integrity, bolster independent media and other modest efforts that the president said would “seed fertile ground for democracies to bloom around the world.”

But he also acknowledged that he path ahead was difficult for democracies amid a rise of authoritarianism around the globe. We know how hard the work is that’s going to be ahead of us, but we also know that we are up to the challenge, he said in remarks to close the virtual meeting.

However, Biden has been criticised over the guest list of the summit as well as that the summit was targeted at China and Russia and not other autocratic governments and it also missed out on inviting the middle-eastern leaders.

Both China and Russia fiercely criticised the summit, with their ambassadors writing a joint essay ahead of the gathering. They wrote the Biden administration’s decision to hold the summit reflected a ‘Cold-War mentality’ that may stoke up ideological confrontation and cause rift globally.

China, irate over Taiwanese participation, produced a long white paper on the advantages of the Chinese model of democracy. It extoled that there is no fixed model of democracy; it manifests itself in many forms. But the West propagate the principles of One Person, One Vote and party competition underlying the western electoral system as the sole criterion for democracy.

The White House also faced scrutiny over nations invited to the summit. According to CIVICUS Monitor, a group that monitors civic freedoms across the globe, only 5% of the population of the 111 countries represented at the summit live in countries where the right to free speech, right to protest and other core civic rights are fully respected.

Several countries identified due to concerns raised by civil society groups and the US State Department for their serious anti-democratic trends or human rights concerns — including India, Iraq, Pakistan, Poland, Ukraine and the Philippines — were invited. 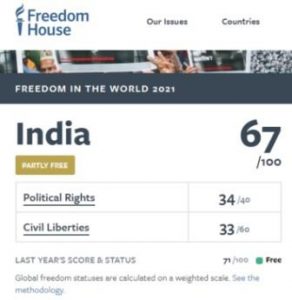 In its 2021 report on political freedoms, Freedom House lists Washington’s duplicity on the issue more clearly. The report gives Hungary a score of sixty-nine, putting it in the “partially free” category. But Ukraine receives an even more insipid score of sixty—continuing its steady decline over the past several years.

India’s score is sixty-seven; the Philippines – fifty-six; Kosovo – fifty-four; and Pakistan, a dismal thirty-seven—barely keeping that country out of the “unfree” category.

Critics say that the tactic for smaller countries with highly questionable democratic credentials to get Washington’s invite for the democracy summit was to obediently follow the US lead on important international issues.

Jen Psaki, the White House press secretary described the invitations as not intended as a ‘stamp of approval’ but the administration’s desire to seek a diverse range of voices and faces and representatives at the discussion.

As per the protagonists of The Summit for Democracy, it had a larger geopolitical ambition. It reflects a prominent view within the Biden administration that assembling a global coalition of democracies can counter China’s rise and continued Russian aggression. 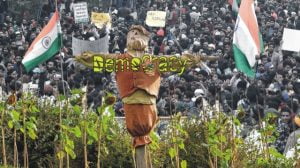 Biden has repeatedly made a case that the like-minded allies and US need to show the world that democracies are a far better vehicle for societies than autocracies. It is a central tenet of Biden’s foreign policy outlook. But his first year in office has been a period that he says has been marked by a “backward slide” for democracy around the globe.

The initiative, also called for establishing a voluntary written code of conduct meant to guide government and tech companies on human rights criteria for export and licensing policy. Under the global charter for digital public goods, governments, civil society groups, software engineers and tech companies would declare principles for open source tech products. Biden also pledged that the US would spend up to $424 million in the next year around the world to support independent media, anti-corruption work and more.

However, the choice of panellists to reflect US’s views also courted controversy. Brad Smith, president of Microsoft, spoke on how to use ‘technology for democracy.’ John Brothers, president of the billionaire investment giant T. Rowe Price, which holds a massive portion of Venezuelan debt, moderated a discussion on ‘responsible investment.’ Kent Walker, president of Global Affairs for Google, which has publicly admitted to censoring the World Socialist Web Site, spoke of how private enterprises can aid ‘democracy.’ Critics assert that the people who could be described as holding a completely contrary position on these issues were invited to speak on how to tackle them, which seems quite farcical. 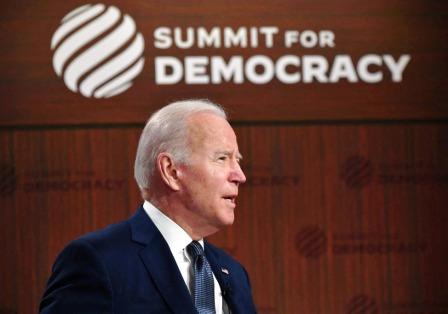 Biden said it was also a moment for the United States to look inward about shoring up its own democratic institutions, he said, that the sacred right to vote, to vote freely, the right to have your vote counted is the threshold liberty for democracy. But this dos not match with what is really happening in the US, movements like Black Lives Matter raised the issue of racial and colour discrimination, on which the Summit was completely silent.

The overall conclusion seems to be that the Summit for Democracy would have been more effective had it remained focused on strengthening and defending democracy rather than highlighting contradictions between democracies and authoritarian rules.

As some critics pointed out behind the pretences of defending democracy against meddling autocrats, lies Washington’s drive to maintain its global economic hegemony. The case for democracy is simple: Democracy is the only political vehicle, which could protect minority voices while also protecting the rights of journalists, citizens, and opposition leaders to criticise their government. It also underlined the continuous efforts by President Biden to leave a political legacy.