‘Sukhbir is bluffing Punjab’s farmers; A Minister’s letter has no legal value over an Ordinance’ 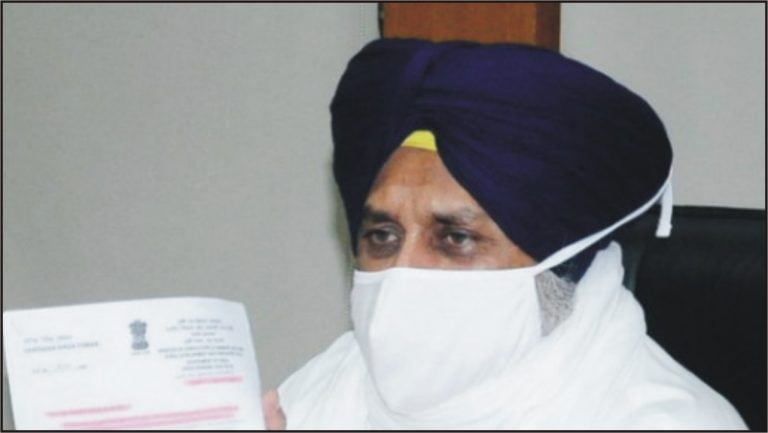 Minister’s letter to Sukhbir does not reverse the devastating implications of the Agri-Ordinances.

It’s a matter of unfathomable dismay that Sukhbir Singh Badal President of the Shiromani Akali Dal (Badal) in his recent virtual press conference at Chandigarh, while advancing his arguments in favor of the Agri ordinances, promulgated by the president of India, was repeatedly showing with euphoric excitement a letter written to him by the Union Agriculture Minister Narendra Singh Tomar, claiming that this letter is the final adjudicator on the Agri Ordinances, notwithstanding the negative implications of the ordinances, already notified in the Gazette of India.

During this public narrative Sukhbir Singh Badal patently exposed his deficient intelligence quotient, in projecting the value of a letter written by a Minister to an MP in comparison to the legal inference of the Ordinances promulgated by the President of India and duly notified in the Gazette of India.

I wonder how he gives much more significance to a simple letter rather than understanding the devastating implications of the Agri Ordinances, causing unimaginable socio-economic consequences to the farming community.

If things are seemingly beyond his comprehension to understand the far-reaching demeanor of Agri Ordinances for the farmers then he should better desist from taking any position on the ordinances. And if he understands the nuance then he is cleverly skirting the apparently conspicuous and operative anti-farmer orientations, reflected in the clauses of the ordinances.

I’m really amazed at his phenomenally adroit cunningness with which he is defending the anti-farmers ordinances, so unassumingly, against which all the Kisan organizations of Punjab, are up in arm, ever since these ordinances have been promulgated on June 5, 2020.

I personally feel that Sukhbir Singh Badal is not that boob, as he is pretending to be, he is probably acting as such, just to please his wife Harsimrat Kaur Badal, who has consciously voted in favor of all the three anti-farmers ordinances while the ordinances were being approved by the cabinet.

Otherwise being Deputy Chief Minister of Punjab twice and Member of Parliament for the second term, Sukhbir should know the nuance and legal acceptance of the ordinances, notified as lawful statutes in the Gazette of India.

Consequently, a simple letter written by Union Agriculture Minister Narendra Singh Tomar in no way qualifies at all the legal validity and it neither has any consequential applicability nor it any way reverses the devastating far-reaching consequence by any implication against the farmers.

Therefore, Sukhbir Singh Badal should stop befooling the farmers by using this insignificant piece of communication which at best could be defined as a document of treacherous betrayal of the farmers interests which justify the ‘willful deceit’.

The so-called rubbish deserve to be consigned to the garbage assemblage.

PrevPrevious‘Act of God’ in ‘Ram Rajya’?
NextIndia Is In Denial About The COVID-19 CrisisNext
Author Related Post
Related Post