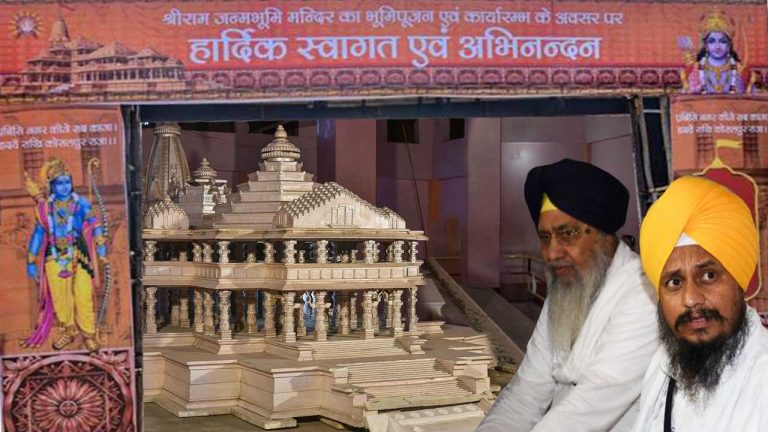 Hindutva is careful with Sikhs. While fringe Hindutva organisations exist in Punjab, they seldom confront the Sikhs directly. Even if they do, they often run away at the time of confrontation. For the past few decades, the Hindutva way to deal with Sikhs has been through first praise, then appropriation.

That is why, for the Ram Temple construction related ‘Bhumi Pujan’ ceremony in Ayodhya, scheduled for August 5, nine saints and faith leaders of the Sikh community are on the list of attendees. They include head priests of all the five Takhts, and the national president of the RSS-affiliate Rashtriya Sikh Sangat.

Notice, this last organisation – Rashtriya Sikh Sangat –whose even the acronym is RSS. Its only job is symbolic representation of Sikhs in the Hindutva spectrum. However, doing that sends a signal to the Sikh community –Hindutva is cool, it is friendly towards Sikhs. That is why the Rashtriya Sikh Sangat has already started a ritual prayer Ardas at Ayodhya. It is again a way to placate Hindutva sentiments.

The head priest of the Akal Takht has been requested to represent Takht Sri Kesgarh Sahib and the Takht Sri Damdama Sahib because the three are located in Punjab. Head priests of Takht Nanded Sahib and Takht Patna Sahib will come from Maharashtra and Bihar, respectively.

Other Sikh invitees are heads of Nanaksar sect, Nirmal sect, Ravidas sect, and head priest of Brahmakund Gurdwara, located in Ayodhya. This piece concerns itself not with these sects but with the five Takhts because those are the representative institutions of the Sikh community.

The Bhumi Pujan is an important foundation stone not only of the Ram Mandir but of India becoming a Hindu Rashtra. The attendance of the Sikh head priests sends out two important signals: one to the nation and another to the Sikh community.

To the nation the signal is that the minority Sikh religion accepts the domination of the Hindu religion. To the community it signals that the principles of justice and equality on which the religion was founded and for which it has fought for the last 500 plus years have finally surrendered to an unjust order by the Indian state.

The Ram Janmabhumi-Babri Masjid court order quotes the Sikh Janam Sakhis in great detail to establish that the disputed 2.7-acre land of Babri Masjid was indeed the place where the mythological Lord Ram was born. In the order, Guru Nanak is mentioned 14 times.

A common issue with the Janam Sakhis, revered as they are by the community, is that because they were written at least half a century after Guru Nanak left for his heavenly abode, they are hagiographic and mutually contradictory.

The question is: when Sikhs were not party to the claim, why were the community’s documents used by the Court? In fact, when the judgement came, the Akal Takht head priest had criticised it on the grounds of the use of Janam Sakhis in the case.

The judgement holds the demolition of the Babri Masjid in 1992 as illegal, its desecration in 1949 as wrong, but ordered the Government of India to create a trust to build the Ram Mandir temple.

When the judgement itself is in question – though binding on the nation and the citizens – the best approach for the Sikh community is to not participate in the function. It is a matter between The Hindus, the Muslims and the Buddhists. The Sikhs should not be part of it. The best recourse is to ignore the Bhumi Pujan.

The invite furthers the agenda. Through the head priests of the Takhts, the invitation and their presence seeks consent and attestation from the Sikhs that they are with Hindutva and against Muslims and Buddhists.

This is insidious to the secular fabric of our nation. This will be fertilizer to the tree that the Sikhs have been trying to uproot for decades now – communalism.

It is true that the Sikh institutions are in the hands of the Akali Dal which is a partner with BJP for electoral reasons. However, a moment like the Bhumi Pujan is an historical occasion for the Sikh institutions to stand by the Sikh community and not be appropriated, not surrender to the Hindu Rashtra and forfeit all right to protest against any atrocity to the community.

Let the Akali Dal sort out its relationship with the BJP. The signal the community sends through its head priests to the forces of Hindutva is of far greater value than some political party.

There will be a price to pay but given Congress or BJP, the Sikhs have been paying a price. There is nothing greater for the community than upholding justice and being on the right side of history.

Also Read: Democracy is not for rewriting History