NATAK AT THE BORDER

We Are The ‘Samaj’ – The Damsels of Singhu/Tikri Border 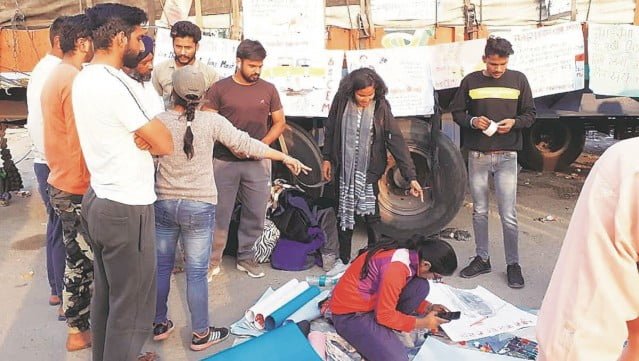 Daughters are announcing loudly to the whole world: “We are the ‘Samaj.”

WE ARE all individuals, distinct from each other, but when we come together, we form a society. “In this society of ours, we can justifiably take credit for whatever good there is, just as we must assume responsibility for its flaws. And, of course, there is far too much that isn’t acceptable in our society, particularly when it comes to women.” That is the core theme of Bha’ji Gursharan Singh’s play called ‘Samaj’.

Some 22 young girls of Chandigarh came together for a workshop and were trained in the intricate art of theatre. As the workshop was in progress, the great playwright hit upon a novel idea: Instead of asking these girls to present any existing play, let them have an absolutely new script. That is how the play ‘Samaj‘ came into being. It envisaged a society, one in which women had equal partnership.

The play reached its zenith with the empowered girls carrying out a ‘Jago‘ to the tune of powerful words that moved the audience deep within.

Thirty years later, the same play, ‘Samaj‘, is today representing the core idea propelling the farmers’ agitation. Once again, the world is watching the women carrying out ‘Jago‘ and Gursharan Bhaji’s ‘Samaj‘ leading the movement for change from the front.

When well known journalist Ravish Kumar says ‘Ek taali tau Harinder Bindu ke naam honi hi chahiye‘, one somehow knows in one’s heart that the twinkling blue eyes of the master craftsman would be smiling upon these women. His resoundingly emotional words are ringing in our ears decades later.

Bindu is not alone; there are many such women who, with kesari dupattas wound tightly around their heads, have jumped right into the arena. The great playwright’s blessings are with them. ‘Samaj‘ is once again throbbing with life.

These warrior women of Punjabi theatre are today on the forefront of people’s agitations, not only acting on the stage or contributing with a song here or a poem there but also looking after other responsibilities.

Look at that damsel called Jassi Sangha, untiringly and continuously disseminating the news from the morcha front while also looking after the elderly women there.

Yet another example is Sarvir Kaur, a theatre actor who is making an important contribution through songs and poems and ‘bolis,’ taking the crowd with a storm, accompanied by her life partner and mother.

Meet Veerpal Kaur. She is neither afraid of the police now, nor of someone dishing out unsolicited advice. She is either doing what she does best – theatre – or going around pasting posters and stringing banners.

And then there is Navkiran Natt, keeping up with her articulate interviews and and an ever firm stance.

Harinder Bindu was a little kid when those espousing the people’s causes were silenced by the guns of terror in Sewewala. She used to sing small ditties in pro-people theatre. Today she is a state level leader, having risen to a stage that people look up to as they hear her fiery words.

Gursharan Singh Bha’ji had written a play, ‘Khambha Wali Kudi‘ (The Girl With Wings), based on the story by Gul Chauhan. There were many who could not swallow the rebellion of the protagonist girl and the feudal dare had loudly asked if Gursharan Singh was not guilty of misleading the girls by spoiling them beyond limits.

The playwright was quick to snap back: “If my spoiling them gives them the strength to hold their heads high, then I intend to spoil them even more such women!“

Today, these girls have grown wings. They are the ones infusing new energy into the morcha and portraying a picture of ‘Samaj‘ that speaks of equality and equity. Whenever scholars will chronicle the world of theatre, they will undoubtedly take note of these women and their work.

The world of theatre that has come alive at the Tikri and Singhu Border represents a theatre that is inherently alive and throbbing with the energy of lakhs of viewers.

It is portraying the truth, it is pro-people and the many hued colourful dupattas are lending it beauty as well as discipline.

One can see in this ongoing theatre the entirety of our society. There is a very elderly Mohinder Kaur, there are the newly wedded young women, just as there are the college going articulate well read daughters, school going girls and little kids who are still learning to form words and hop around like little fairies in this winter.

There is concern, there is excitement, there is wisdom, too. There’s love for life, and there’s a death wish too, a spirit of martyrdom.

When Kamaljit Niyal of Patiala, along with her fellow actors, plays keeners, white dupattas covering their heads, and grieves the dead singing laments slamming the regime, it leaves even those initiated into the art of theatre mesmerised. The modulations in her voice as she renders the dirge leaves the audiences shaken.

The pages of Hemant Sidhu’s notebook are too wrinkled by now, but when this young lass from Warra Bhaike (ਵਾੜਾ ਭਾਈਕੇ) pens her deepest feelings and then recites these in her quivering voice, she infuses many a dream among her listeners.

Watch Paramjeet Pithon (ਪਰਮਜੀਤ ਪਿੱਥੋਂ) with her sisters carrying out the ‘jago‘, and you will be reminded of Balwant Gargi’s staging of a play in a Chandigarh village in a different era. Our glorious past is coming alive, in what a glorious fashion!

Gurbakhsh Kaur Sangha, who lost her partner, Gian Singh Sangha, speaks haltingly and slowly, inspiring her Punjabi brethren. Kamaldeep from Barnala is making her artistic mark from the stage.

Arshika Singh’s camera whizzes incessantly, as she, oblivious of the vehicles whizzing past her, hops about documenting this new world that has come to life on Delhi’s outskirts.

Kuldeep Kaur Kussa of the famous Kussa village in Nihal Singhwala (Moga) is carrying out prabhat pheris, singing Jago and humming songs about a great new day, bringing alive the legacy of her village that had once bestowed a unique recognition upon Gursharan Singh ji.

This is when one feels like telling the tale of this unique theatre. One wishes to talk of the granny, who, when asked what deeply held wish had prompted her to trudge all the way to Delhi at this fag end of her life, responded,“I do not want to feel small when facing my grandkids who might ask someday where was I when the regime was snatching away what rightfully belonged to the sons and daughters of the soil.”

Bha’ji, the country you dreamed of seems here, your people are finally gaining the wisdom you wanted to impart to them, they are responding to your words, the society is finding its way towards a more equitable existence, your daughters are announcing loudly to the whole world: “We are the ‘Samaj.”

Long live, Gursharan Bha’. You’re forever alive among your people! I am sure you are somewhere around at Singhu or Tikri, watching us from wherever you have set up your mighty stage in heavens.

Also Read: A Punjab In Negotiation – What Did We Get?

The author is an award winning renowned actor, playwright, director, and the prime force behind Adakar Manch, Mohali. He can be contacted at 98880-11096. Kindly prefer WhatsApp message only.

PrevPreviousFarmer Protests Expose Nexus Between Rulers and Corporates
NextTo support, or not to support, that is the questionNext
Author Related Post
Related Post

Oxygen concentrators: How they differ from oxygen cylinders....

Computer Mouse – Problems Due To Excessive Use....

We Are The ‘Samaj’ – The Damsels of Singhu/Tikri Borde....