Will Absence Of Retrospective Tax Boost The Confidence Of Domestic, Foreign Investors? 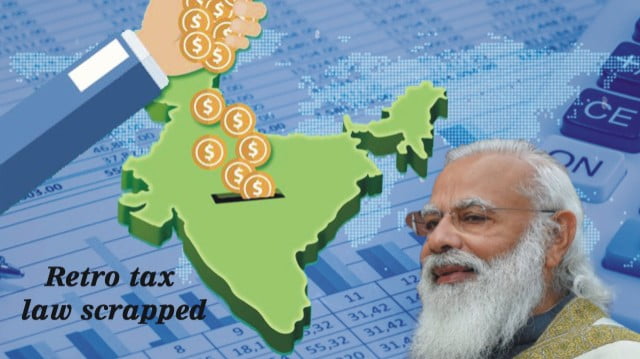 Government undid a mistake of the past by scrapping retrospective tax: Modi

Retrospective Tax was introduced in 2012 which allowed the government to ask companies to pay taxes on mergers and acquisitions. The tax has been at the centre of disputes between the Government of India and companies like Vodafone and Cairn Energy. Both companies had won international arbitrations against the levy of retrospective taxes on them.

In terms of taxation, retrospective tax means giving effect to the amendment in the present law before the date on which the changes were brought in. It taxes a transaction that took place prior to the law being framed.

On August 4, Prime Minister Narendra Modi while addressing the annual meeting of the Confederation of Indian Industry said the Government undid a mistake of the past by scrapping retrospective tax and the very move to scrap the contentious retrospective tax law of 2012 will increase the trust between the Centre and the industry.

But the big question: Will Absence of Retrospective Tax Boost the Confidence of Domestic, Foreign Investors? Also what would be the impact of scrapping the retrospective Tax on industries facing the heat of the pandemic and it is too early to guess?

If the scrapping of the Tax really going to increase the trust between the Centre and the industry then it would be a step forward towards right direction for the companies and industries fighting the short, long term impact of the pandemic.

According to Sankarshan Basu, Professor of Finance at the Indian Institute of Management (IIM), Bangalore, “The Government of India has withdrawn the Retrospective Tax that was imposed by the then Finance Minister in 2012 ostensibly to force Vodafone to pay the relevant taxes. While retrospective taxation is a right of any sovereign government and number of other governments has used it, in this case the imposition of retrospective tax caused a huge flutter and discord.

In a sense, in my opinion, the story was not sold appropriately and convincingly and thus the negative sentiment gained ground. Over time this got couple with the impact of tax imposition on Cairn Energy and the resultant loss of the claim by Government of India during arbitration. In fact, the real threat that looms is takeover of assets of Government of India by Cairn in a number of geographies to recover the dues.”

“It is in the backdrop of all of this that the Government of India introduced a bill in Parliament to withdraw the Retrospective Tax. But in a sense, this may be a bit too little too late. Yes, the market did react positively but not with the same level of exuberance that one would have expected.

One reason for the same is that even though the tax has been withdrawn, the effective cost for Government of India will be huge – Vodafone (the reason why the tax was imposed) is on the verge of bankruptcy and collapse – by withdrawing the tax the government will lose on that count and if it plans to revive Vodafone, that would mean additional outgo from the Consolidated Fund of India. Thus, in my opinion, while the optics may be good, in real terms the value delivered by such actions will be very marginal,” said Basu.

Dr. Amir Ullah Khan, Development and Trade Economist who has served as advisor to the Bill and Melinda Gates Foundation and the Wadhwani Foundation while sharing his perspective said, “The retrospective tax imposed in 2012 was a bad move. It went the basic template of taxation where the certainty of tax rates and transparency are considered sacred principles. It also went against several international treatises that India had signed with foreign countries and against conventions that have expressly spoken against retrospective taxes.

However, despite the Supreme Court ruling against such a move, the Parliament passed the amendment to the Income tax act then and three firms stood to lose billions of dollars – Vodafone, Vedanta and Cairn energy. The UPA 2 government stood its ground and continued this position till it ruled.”

He added, “In 2014, the NDA came in with the FM Arun Jaitley repeatedly saying that retrospective taxation was a bad idea and would be removed. The NDA repeatedly said that this had damaged India’s reputation and had discouraged foreign investment from coming in. It also referred to RT as tax terrorism. However, it did not do anything to change this situation for the seven years it has been in power.”

Despite taking a tough sovereign stance all along that foreigners will not dictate taxation policy had to wilt under the pressure building up and amend the RT provision last week nine years after passing the law and seven years after the NDA had declared it a bad law.”

Surajit Sinha, Professor of Economics, Department of Economics Sciences, Indian Institute of Technology (IIT) Kanpur while simplifying the retrospective tax said, “Retrospective tax can be imposed ex post on any economic transactions that occurred in the past. Suppose I made some money from trading shares in 2010. Now, government can impose an additional tax in 2021-22 on that income.

This is therefore one of the most regressive form of income tax that one can imagine. It not only harms my confidence, at the same time it equally harms the country’s reputation which is equally damaging. When UPA imposed it, opposition parties like the BJP was up in arms against it. Unfortunately, it took the BJP government only 7 years to repeal it with some additional clauses regarding pending legal complaints etc.”

“Why was it at all taken off the table now? Most likely the threats that India and Indian property abroad have been facing lately from foreign companies and foreign governments, has woken up our government to do something about it at last. Hope, India will not again come up with any such regressive tax system in future which can threaten domestic as well as foreign businesses with interest in India. India also stands to lose lot of its credibility, both domestically and internationally” argued Sinha.

Professor Naushad Ali Azad, former Head of Department of Economics and Dean Faculty of Social Sciences, Jamia Millia Islamia, New Delhi while sharing a different perspective said, “The government is hard pressed on economic front due to the pandemic haul on industrial activities as well as the service sector. As Indian economy is largely integrated with the world economy and hugely dependent on foreign investment, the best way out in the policy space is to go ahead with the unfinished agenda of economic reforms.

Recent decision on the retrospective tax is thus a welcome step as this will help improve business sentiments of the domestic and foreign investors.”

PrevPreviousIs Taliban victory in fact a victory for the Americans?
NextDeath Registers Expose The Gujarat Model Of Counting The DeadNext
Author Related Post

Caste Based Census Should Become a Reality....