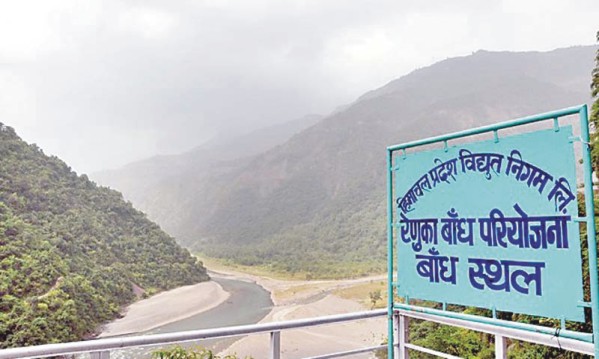 The Renukaji Dam is to be constructed on a tributary of the Yamuna River.

IT was in 1966 that the idea of exploiting the potential of Renukaji Multi-Purpose Project in Sirmaur district, Himachal, was Conceived by the experts. However, it took 55 years to convert it into reality.

The project, which has national status, is located 250 km from Delhi. The 148-meter-high rock-filled dam on the Giri river near Dadahu will ensure storage of 498 million cubic meters of water in its reservoir. Delhi could be one of the main beneficiaries of dam, along with five other states.

The 55-year delay in green signal to the important project is an example of red tapism, complexities of government procedures and apathy of politicians belonging to both the Congress and the BJP. For 27 long years the Himachal Government kept commissioning various surveys and subsequently submitting its reports to the Government of India and Delhi Government for technical and forest clearances!

Finally, the cumbersome exercise paved the way for the recent financial approval on December 15 in the meeting of cabinet committee on economic affairs (CCEA) chaired by the Prime Minister.

Centre has agreed to bear 90% cost whereas ten percent cost will be borne by six beneficiary states. As per DPR, the completion period of Renukaji Dam will be 6 years.

Analysts say that timing of foundation laying ceremony besides addressing a big rally, Modi has killed two birds with one stone. A concrete proposal for quenching the thirst of Delhi may be handy for BJP when it takes on Kejriwal’s party in February 2025, which happens to be the date of completion of the project.

Second, the PM’s rally will act as morale booster and prepare party leaders and Workers for ensuing 2022 assembly elections as they were demoralized after humiliating defeat in four by polls including the important Mandi Lok Sabha seat.

Senior officials from Himachal have appreciated the concerted efforts of Gadkari who held several rounds of  meetings with chief ministers of the beneficiary states to sort out intra-state disputes on sharing of water and other benefits from Renukaji Dam Multi-Purpose Project.

As per clauses of the agreement, 90 per cent cost of irrigation and drinking water component of the project, i.e. Rs 3,892 crore will be provided by the Central government and rest 10 per cent by the six beneficiary states of northern India. Himachal has spent more than 10 percent from the beginning of the project. Delhi and Haryana have also contributed their shares to become eligible for the dam’s benefits.

It may be mentioned here that late former chief minister, Sheila Dixit had sincerely persuaded the project for 15 years during her three tenures. She succeeded in declaring it as a Project of National Importance during Manmohan Singh’s 2nd tenure in 2010. Delhi Chief Minister Kejriwal also continued the efforts.

But it was the union Government that accelerated the process of various clearances after 2015. It culminated in the recent meeting of GOI’s cabinet committee on economic affairs (CCEA) headed by the Prime Minister that cleared the project and agreed to bear 90% cost.

Experts say that flow of river Giri will increase by nearly 110%, enough to meet the drinking water needs of Delhi and other basin states in the lean period.

Water flow will reach 15 km downstream in the Hathni barrage in Haryana from where water is to be released into the canal which goes to Delhi. After that the water will be purified in the Wazirabad water purifying plant by Delhi Jal Board and supplied to the people of Delhi.

Official record reveal that although surveys related to Renukaji dam started in 1976, procedural hurdles were crated at every step. The total cost of the project was estimated on Price Level 2015 for Rs. 4596 Crores. It has escalated to Rs 7947 crore.

Renukaji Dam is a part of Pradhan Mantri Krishi Sinchayee Yojana (PMKSY). It envisages the construction of a 148-m-high rock fill dam across the Giri river in Sirmaur having a water storage of 498 million cubic metres.

It will supply water to the NCT of Delhi and 40 MW power (installed capacity) of incidental power production to Himachal, generating a revenue of 120 crore. It is proposed to be executed by Himachal Pradesh Power Corporation Limited (HPPCL).

The Renukaji Dam is to be constructed on a tributary of the Yamuna River. With a live storage of 0.404 MAF, the reservoir is designed to supply 23 cusecs of water to Delhi, which means pumping about 23,000 litres per second.

Himachal Pradesh Governor Bandaru Dattatraya had last month reviewed the progress of the Project and wrote a letter to union Minister for Water Resources Gajendra Singh Shekhawat to expedite the process of granting investment clearance by the Cabinet which yielded result.

At present, the statutory clearances of environmental, forest have been obtained hence the release of funds from the government of India will start . Rs 577.62 crore will be deposited in the state Compensatory Afforestation Fund Management and Planning authority (CAMPA) account.

One reason of the delay was also the opposition from the local population and environmental groups which had feared displacement of 800 families residing in 35 villages apart from serious environmental concerns pertaining to loss of biodiversity in the area.

However, the state government has projected a boom in the local economy due to river rafting, water sports etc besides creating thousands of job opportunities in the area. It claims that total submergence of area will be 1508 hectares. The compensation has been given to affected families and enhanced amount will be given with the passage of time.