Raj Bhawan’s contemptible behavior: “Guv, we are not living in a British colonial era” 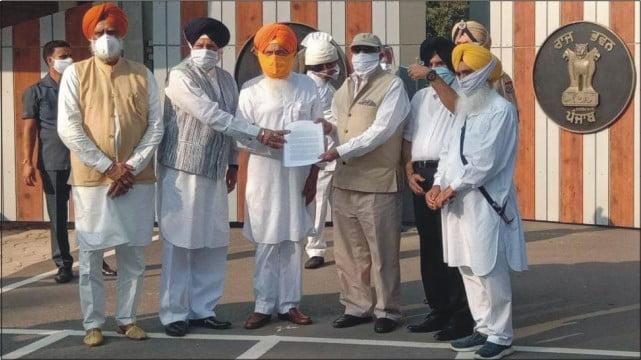 It’s been observed for quite some time that the visitors to Punjab Raj Bhawan, Chandigarh are not being treated with dignity and respect they deserve, ever since the pandemic of Covid-19.

It is such a humiliating experience that even elderly Parliamentarians such as S. Sukhdev Singh Dhindsa (85) Member of Rajya Sabha and Jathedar Ranjit Singh Brahmpura Former MP (83) accompanied by former Ministers and MLAs were made to stand on the road, in front of the gate of the Punjab Raj Bhawan to call on the Governor Shri V P Singh Badnore.

The Governor disembarks from the ‘Golf cart’ near the Gate and appears on the scene for a few minutes with his paraphernalia in the front of the Raj Bhawan’s main gate and disappears quickly after receiving the memorandum.

Moreover, it is pertinent to mention here that there is no dearth of space in Punjab Raj Bhawan which has so many lush greens, sprawling lawns, spread in almost 25 Acres, then why make elderly people and senior Parliamentarians to stand on the Road outside the Raj Bhawan.

Notwithstanding the Covid-19 restrictions, this demeaning practice must be done away forthwith, in view of the dignity of the people of the State.

Unfortunately, the office of the Governor does not even deem it appropriate either to acknowledge or to revert back in response to any memorandums submitted to the Governor, in his capacity as constitutional head of the State.

Recently I saw a very disparaging visual of the meeting of all the Punjab Ministers and MLAs, belonging to all political parties, except BJP, with the Governor of Punjab on 22nd of October led by none other than the Chief Minister of Punjab, Capt. Amarinder Singh.

This highly distinguished delegation met the Governor in Raj Bhawan to seek his assent to the important Farm Bills, passed by the State legislature unanimously in the forenoon session of the Punjab Vidha Sabha, the same day.

To my utter dismay the Punjab Raj Bhawan did not even had the courtesy to offer chairs to Ministers and the MLAs, even more oddly, they were outrageously asked to stay behind the rope-ring security cordon that was laid by the security officials of the Raj Bhawan to keep the State legislators away from the Governor.

Only two Chairs were put up to seat the Governor and the Chief Minister and the rest all the representatives were made to stand behind the rope.

I wonder why such a reprehensible treatment was meted out to such a distinguished delegation consisting of all the Minister, Leader of the opposition and MLAs, headed by the Chief Minister.

The Governor and the establishment of Raj Bhawan must know that we are not living in a British colonial era, it’s a people’s Democracy and every citizen of free India deserves dignity.

The Governor of Punjab, respecting the spirit of Parliamentary democracy, must make suitable amends and this kind of excessive hubris in Punjab Raj Bhawan is certainly not acceptable.

The least we expect from the dignity of a Governor is that he must express some kind of remorse in his own humble way for the contemptible and wicked behavior of the Punjab Raj Bhawan towards the elected representatives of the State. The incident has caused a very wide sense of indignation all over the spectrum and needs to be addressed immediately in a right perspective.