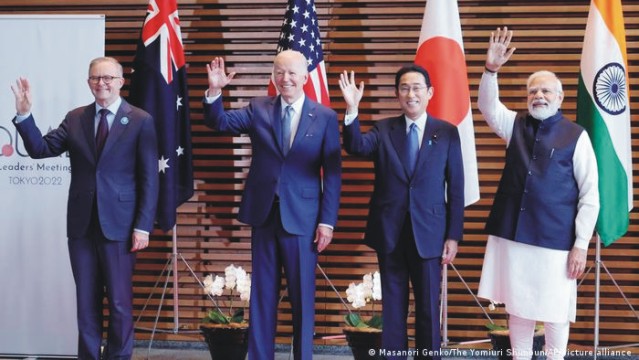 The Indo-Pacific policies which the Quad pursues ought to remain focused on China and should cover Russia only if it becomes more active in this region.

Perceiving China as a security threat in the Indo-Pacific region, QUAD – Quadrilateral Security Dialogue comprising India, US, Japan, and Australia has come out with a dual policy of infrastructural push of $50 billion aimed at countering China’s Belt and Road initiative (BRI) and checkmating Dragon’s debt-trap diplomacy in the Indo Pacific region.

US President Joe Biden kept aside the Ukraine war and went ahead with his plan to formulate a long-term strategy to checkmate Dragon in the Indo-Pacific. China is gradually becoming a threat to the security of US interests in the area. Besides China, the summit also focused on issues such as Covid-19, the Quad vaccine initiative, climate issues, Quad Infrastructure Coordination Group, education, hydrogen, and people-to-people exchanges which will benefit all Quad members.

Biden shed the “strategic ambiguity” of US policy over Taiwan and vowed to defend it in face of Chinese aggression. President Biden also held bilateral meetings with the Quad leaders including with the new Australia Prime Minister Anthony Albanese.

India’s strategic ties with the United States got a fillip when US President Biden acknowledged that America’s relationship with India is among the closest that the US has on earth.

Biden cementing the bonds will help India in the future to face security threats on the Line of actual control (LAC) by China.

India’s Prime Minister Narendra Modi described ties with the US – “a partnership of trust and friendship” – that will continue to ensure global peace and stability, an issue that reflects the interdependence of two big democracies in the world.

India has got every reason to draw satisfaction from the Quad unanimously denouncing the use of the terrorist proxies and emphasizing the importance of denying any logistical, financial, or military support to terrorist groups which could be used to launch or plan terror attacks, including cross-border attacks.

Quad members reiterated their condemnation of terrorist attacks including the Mumbai and Pathankot terror attacks, a direct hint to Pakistan. Quad has also shown commitment to anti-money-laundering and combating the financing of terror groups which applies to Pakistan as it has been placed on the Grey List by the Financial Action Taskforce (FATF).

Factual assessment and available data showed that China has entrapped poor nations like Pakistan, Sri Lanka, Nepal, Myanmar, etc. through its debt diplomacy hence Quad has come out with a counteraction plan which envisages a Quad Debt Management Resource Portal.

It has been unveiled to counter China’s growing expansion policy in the region. The new mechanism will have the goal of working closely together amongst the partners in the region to attract public and private investments to bridge gaps.

While focusing on harnessing critical and emerging technologies to enhance the security and prosperity of the region, Quad also committed itself to moving ahead of 5G technologies and beyond thereby welcoming the Prague Proposals on telecommunications supplier diversity. It will be done through the advancement of interoperability and security through the signature of a new Memorandum of Cooperation on 5G supplier Diversification.

Quad has committed $524 million to the next phase of global acceleration of vaccine development work which accounts for fifty percent of total public investors in the world. Quad leaders showed their satisfaction with the progress made by India in the production under the Quad Vaccine partnership.

Quad leaders expressed their optimism about the grant of EUL approvals for India-made vaccines and felt satisfied with the donation to Cambodia and Thailand by Quad members. It is evidence of close cooperation amongst the four nations. As per data, Quad has collectively pledged $5.2 billion to the COVAX AMC which forms about 40 percent of the contributions made by government donors. Quad will ensure vaccines for needy nations in the future will be affordable and effective.

A First of its kind Quad Fellowship program has also been launched. It is designed to build ties among the next generation of scientists and technologists from the four nations. India is looking at it as a wonderful and unique initiative that will provide an opportunity for students to pursue graduate and doctorate programs in engineering, science, mathematics, and technology in the US, Japan, and Australia. It will also enhance people-to-people contact and academic excellence amongst member countries.

As per the White House, Quad Climate Change Adaptation and Mitigation Package (Q-CHAMP) has twin themes namely “mitigation” and “adaptation”. Quad members have committed themselves to expand our programs in support of climate actions between the four countries as well as in the Indo-Pacific region.

The move will also initiate the first-ever Quad Cyber security Day to help individual internet users across the Quad nations, the Indo-Pacific region, and beyond to better protect themselves from cyber threats.

Similarly, in a significant development, Quad will accelerate the maritime domain awareness initiative, the Indo-Pacific Partnership for Maritime Domain Awareness (IPMDA), designed to work with regional partners to respond to humanitarian and natural disasters and combat illegal fishing.

Dragon is upset with Quad

As expected, China reacted sharply as Quad is advancing beyond its estimation and United States leading from the front. China claims that Quad’s commitment to cooperate with partners in the region who share the vision of a free and open Indo-Pacific appears to be a farce.

To give a message to Quad leaders, China and Russia carried out a regular joint strategic patrol in the Asia-Pacific region for the fourth consecutive year which was aimed at displaying a high level of military cooperation between the two major powers which contributes to peace and stability both in the region.

Chinese foreign ministry also came out with strong statements saying that topics on the South China Sea, East China Sea, and the island of Taiwan will be acting points for the US to further rally its allies and to pressure regional countries to declare loyalty to the US.

Regarding Taiwan, China puts a question mark on the long-term strategy of the US, which is attempting to widen the gap between China and the US in the global supply chain, especially in key areas, and further isolate China on geopolitics to seek an “overwhelming superiority.

The Indo-Pacific policies which the Quad pursues ought to remain focused on China and should cover Russia only if it becomes more active in this region.

China’s game plan is simple as it has brought Russia under its influence as a subsidiary and weak nation which makes it the main challenger to the superiority of the United States to fulfill its ambition to become Super Power in the future. To put breaks on it, Biden has aggressively motivated Quad, AUKUS, etc. to contain the Dragon in Indo-Pacific.