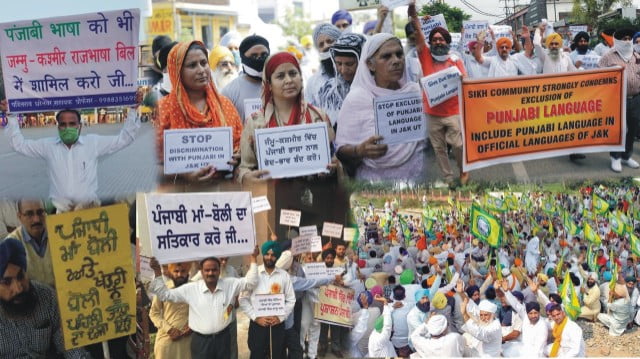 The Centre’s new laws are in fact a multi-pronged attack on the Punjabi community.

For Punjab, a state whose majority is dependent on agriculture, the new Farm Laws are the death knell not only of economy but also identity. That is why Punjab’s struggle is not just against the new laws but for its own existence – it is a do or die.

As part of its struggle, It is time for Punjab to revisit its earlier struggles, charter of demands, and present those that remain relevant. For instance, Punjabi language.

The Anandpur Sahib Resolution, at the open session of the 18th All India Akali Conference held at Ludhiana on 28-29 October, 1978 under the Presidentship of Jathedar Jagdev Singh Talwandi, moved by Gurcharan Singh Tohra, President Shiromani Gurdwara Prabandhak Committee and endorsed by Prakash Singh Badal, then Chief Minister, Punjab, made the following points on Punjabi language and the Sikh people.

This huge session of the Shiromani Akali Dal regards the discrimination to which the Punjabi language is being subjected in the adjoining States of Himachal, Haryana, Delhi and Jammu and Kashmir etc. It is firm demand that in accordance with the Nehru Language Formula the neighbouring States of Punjab should give second language status to the Punjabi language because a fairly large sections of their respective population that are Punjabi speaking.

The meeting regrets the claims of the refugees who had migrated to Jammu and Kashmir as a result of the partition of the country, no compensation has been provided to them even after such a long time and these unfortunate refugees are rotting in the camps ever since then. The Akali Dal Session therefore forcefully demands that their claims should be soon settled and immediate steps should be taken to rehabilitate them even if it involves an amendment in Section 370.

Now look at the Jammu and Kashmir Official Languages Bill, 2020 to which President Kovind gave his nod two days back. The new Law will include Kashmiri, Dogri and Hindi as official languages in the newly-created Union Territory of Jammu and Kashmir. Earlier, only English and Urdu were official languages in the former State, which was bifurcated on 5th August 2019, with Ladakh becoming a separate Union Territory.

Why is Punjabi excluded?

Notice the demand for proper rehabilitation of Sikhs and the status of Punjabi language is more than forty years old. It is a demand from Sikhs to remain relevant in these times, in this modern nation, when the same Sikh society did not leave Kashmir during the Kashmiri Pandit exodus in 1989.

According to the 2011 census, there are 70,000 Sikhs in Kashmir, around 3 lakh plus in Jammu region. They constitute 1.87 per cent of the total population of Jammu and Kashmir. These Sikhs are the descendantsof those Sikhs under Maharaja Ranjit Singh whose rule had spread beyond Kashmir in the early 19th century. It is because of these Sikhs that Jammu and Kashmir are part of the Indian nation.

This is the same Sikh community which bore the violence of Chattisingpora, a hamlet in Anantnag district of Kashmir in which 36 Sikh men and children of the region’s minority Sikh community. Now if the next generation does not learn Punjabi which is the basic requirement to even read the holy text of Sikhs, the Granth Sahib, the Indian state is basically excluding the Sikh religion from its foundational text.

That is why it is critical that the new law is amended and Punjabi language is included. Even more so, the Sikh community in Jammu and Kashmir’s role is acknowledged. This should be a major point in the protest that are being staged in Punjab.

At the same time, in spite of the major differences between the Hindu and Sikh communities in the 1950s and 1960s, when the Punjabi Suba movement was on, and later when Punjab was trifurcated, it is now well established that Punjabi is the language of Punjab. Punjab is not only our language across the religious divide, it is our culture, it is our heritage. That is why the protestors must include Punjabi language and its future in their agenda of protests.

The Centre’s new laws, passed undemocratically through the Parliament, given assent by a compromised President are in fact a multi-pronged attack on the Punjabi community. They are grossly unjust and must be opposed.