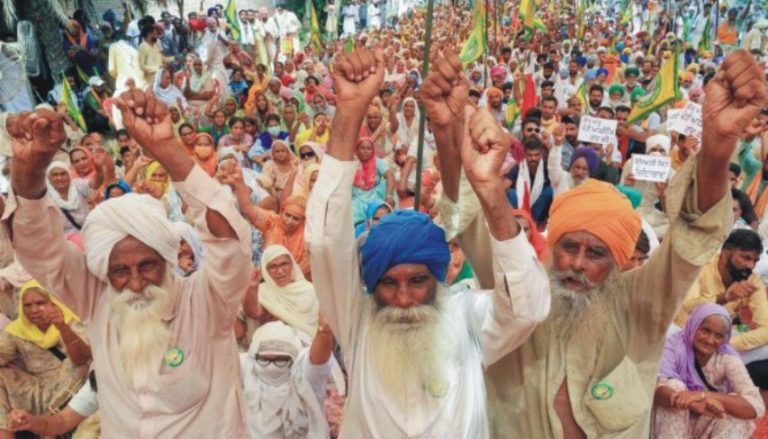 The Punjab protesters are on the right track but the issues are within.

WOE BEFALLS a nation that does not know how to secure its food. Yesterday, Prakash Javadekar, Union Minister of Environment, Forest and Climate Change, singled out Punjab as the only state resisting the new Farm Laws. He should have known a bit of history of the nation the Bhartiya Janata Party is hell-bent on selling to a few crony capitalists.

Unlike elsewhere, in Punjab and Haryana, Minimum Support Price remains a guiding factor on wheat and paddy, though not every farmer gets it. This is why Punjab and Haryana are in the forefront of the protest against the new draconian Farm Laws.

Perhaps India does not know, but Punjab has deep inter-generational memory of how demonising Punjab has been a familiar trope. The minister’s comment must also be understood for how the metaphor of Punjab is understood as a minority religion Sikhs and the minister is invoking a religious prism. It happened in the 1980s, Punjab blazed for a decade and half, thousands died, and now the pattern is repeating itself. The BJP IT cell and television media are already portraying the protests as anti-national. The nation must stand with Punjab in this smear campaign.

In spite of this skewed discourse, the protester rail roko has started again in the state. Punjab is in a corner of the nation. The rail roko should harm Punjab more than benefit it. The Food Corporation of India has taken out almost all its store of grains from the granary of India. Yet, Punjab persists. The burn is showing in the Centre.

Creating burn comes from simple steps taken by protesters like not allowing toll booths to collect taxes from commuters. The spirit is right. What is the state’s basic role if not to provide free health, education and infrastructure services to the people? It is a perverted administration that taxes people on these basics and pushes these services into private hands. The protesters are merely setting the account straight.

News is that all the twelve thousand plus villages of Punjab are going to pass a resolution against the new Farm laws. Remember in 2015, the gram sabhas of Odisha had denied permission to the mining baron Vedanta to mine in their holy mountain Niyamgiri. This is on the basis of the 73rd Amendment of the Constitution. The amendment strengthens the village panchayats for precisely this reason – to challenge anyone up in the pecking order from destabilising the village. Many non-BJP states have also declared they will locally oppose the Farm Laws and not implement them.

The protestors in Punjab have hit the nerve centre of the new Farm Laws by gheraoing the assets of the crony capitalists – the Reliance and Adani businesses. There is a Jio satyagraha underway to stop using Reliance phone connections. The people are boycotting the petrol bunks, the shops, the godowns owned by these capitalists. This will force them to shut shop and leave Punjab.

Today onward, a huge permanent protest is starting on the Shambu border. This is the border with Haryana on the National Highway, the entry to Punjab. Any protest is seen mostly as a physical resistance. News stories that follow mostly focus on the pros and cons of how the protests are affecting people and the state. The effect of protests is counted in financial terms – does the protest force the one being protested against to negotiate with the protesters.

Yet, the beauty of a protest is if it can draw into the open a question so specific and so universal that it becomes a question of ethics and not just finance. The Shambu border protesters have done that. The question is: in an open economy, if everyone can determine the price of their goods, why can’t the farmer do the same? Is a farmer not equal with others? Why does the state have to control the farmer and produce?

Another layer of clear thinking is stated if the question is underlined with another question: if farmers are free to trade their produce, why can’t Punjab and Haryana farmers trade with Pakistan, with the Balkans, with East Europe? For instance, there is a huge shortage of cotton in Pakistan and east Punjab has a surplus so prices are depressed. Allow east Punjab to sell in Pakistan.

The Punjab protesters are on the right track but the issues are within. The singers who drew crowds must defer to union leaders and synergise with them. All protesters must notice that even before the Centre, their real challenge is with the three local political parties – Akali Dal, Congress and Aam Aadmi Party – which are looking for a chink to enter and appropriate the people’s voice.

There is also a section of media that is trying its best to create differences between the mostly rural Sikh farmer and the urban Hindu arthiya. They are saying that the middle-men, the arthiyas should be removed from the system. It is an irony that Hindutva forces are targeting their own folk.

The fact on the ground is that in the agrarian economy, the arthiya is the farmer’s biggest bank. Yes, the relationship between the farmer and arthiya must be smoothened and made non exploitative, which it sometimes becomes, but it is impossible to ignore or side-line the arthiya. That is why this time the Hindus and the Sikhs are together in the protest.

It is the same for Dalits who mostly do not own land and work as labour. If the farmer loses his lands because of the Farm Laws allowing corporates to take over, the labour will also be affected. Yes, the relationship between the farmer and labour must be smoothened. The caste differences – which sometimes become reason for exploitation and violence must be resolved – but it is impossible to ignore or side-line the labour.

The same is true for all other trades and industries associated with farming. It is this unity of the people of Punjab, along with the growing solidarity of the farmers from Haryana, western Uttar Pradesh, Karnataka, Maharashtra and Tamil Nadu that has the Centre rattled. One hopes the solidarity extends and the Centre is forced to bring in another Bill guaranteeing MSP and prevention of farm takeover. Anything less should not be acceptable.